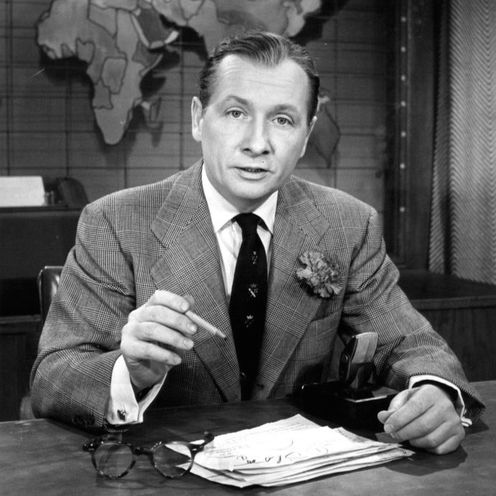 NBC newscaster John Cameron Swayze was television's first "anchor man" – though not for presenting the news. The term instead referred to his status as permanent panelist of the quiz show "Who Said That?" Credit: Wikimedia Commons

Amidst the media tumult over NBC anchor Brian Williams' apparent journalistic crimes, a little history on the role of the news anchor can help with some big questions. How did we get here: a place where news organizations put so much power in one person, a place where that person is allowed – even encouraged – to frequent entertainment and “fake news” shows?

Contrary to popular belief, the anchor has not always dominated American television news (a topic I’ve recently written about for American Journalism). The title wasn’t even affixed to the nightly newscaster until the mid-1960s.

But over time, the position’s prominence has grown, influencing the economics and control structure within news organizations. And as we’ve seen, the rise of the star anchor can hamper the news gathering ability and journalistic integrity of major media networks.

When television gained a large audience in the late 1940s, the main newscaster was hardly the most important element of the broadcast. As late as 1948, NBC’s main offering, The Camel Newsreel Theater, was controlled by the advertiser and a newsreel company. The narrator was never even seen by viewers.

CBS spent the 1940s creating the newscast format we know today, with a newscaster guiding the viewer through the news. But over the course of a few years, CBS used more than a dozen newscasters, considering the role less important than the visualized stories.

In 1948, CBS executives settled on Douglas Edwards for its nightly newscast, mainly because none of the famous Murrow Boys of CBS Radio wanted the job. The next year, NBC switched to the newscast format and the sponsor wanted John Cameron Swayze to be the face of the renamed Camel News Caravan.

The term transitioned from quiz shows to formal news in 1952, when Walter Cronkite was chosen to lead the political convention coverage. In a CBS press release, his role was described as “anchor man.” Cronkite became a hit with viewers so CBS continued using the anchorman descriptor. From the mid-1950s through the mid-1960s, the term became synonymous with political convention and election night coverage.

Even when Walter Cronkite replaced Douglas Edwards on the CBS Evening News in 1962, he was considered an anchor only during political conventions and a newscaster on the nightly news. Meanwhile, the anchorman designation faded from quiz show use after Swayze left Who Said That?

Prominence equates to power – and control

While Cronkite is usually celebrated as television’s first and most iconic anchorman, another aspect of his 1962 promotion can be viewed as the start of the slippery slope that has led to today’s problem at NBC. Cronkite not only became the main newscaster for CBS, but he also insisted on the title of managing editor – which gave him overall control of the newscast.

As Cronkite became the most famous face at CBS, he also had final say over the network’s signature broadcast. With Cronkite’s long and celebrated journalism career, few questioned his credentials for the managing editor title. Staff members did learn Cronkite expected to be on camera for at least six minutes during the newscast. They started referring to his on-camera time as “the magic.”

“Anchor” started to replace the term “newscaster” in television news in the mid-to-late 1960s, after television news surpassed newspapers as the most popular news medium in the United States. The rise of television news coincided with a period political scientist and media scholar Daniel Hallin calls the “high modernism” era of journalism – when journalists promoted the idea that they were objective and uniquely qualified to publish and present the news of the day. It was a time when Walter Cronkite could confidently look in the camera and finish each broadcast with “And that’s the way it is.” And that’s the way it is: Walter Cronkite’s rise to fame established the power and influence of the network news anchor – many of whom maintained editorial control of the newscast. Wikimedia Commons

In this period, more than 9 out of every 10 homes had at least one television set, but viewers had few channel choices (and had to watch programs live), leading to communal dinner hour news viewing. Local stations had also begun to invest more heavily in news, so the “anchor” term easily transitioned to newscasters across the country. In a 1967 New York City survey, sociologist Herbert Gans found that 40% of viewers said they chose their newscast because of the anchor, while only 10% watched because of the quality of the program.

The instances of newscasters doubling as hosts of entertainment shows, or making cross-promotion appearances (as Brian Williams was keen to do) are as old as the job itself. Like Swayze, ABC newscaster John Daly worked on a quiz show (What’s My Line?). Also in the 1950s, Edward R. Murrow often interviewed celebrities on his Person to Person program, while Walter Cronkite hosted You Are There, a weekly reenactment of an historical event. After he became a famous anchor, Cronkite made an appearance on his network’s Mary Tyler Moore Show, alongside the quintessential lampoon of the news anchor, Ted Baxter.

A memorable 1970 debate on the Dick Cavett Show about the merits of television news, featuring Janis Joplin, Raquel Welch and NBC’s Chet Huntley. For decades, news anchors have been making appearances on entertainment shows.

Putting all their eggs in one anchor

In the 1970s, ABC considered the anchor as the easiest path to higher ratings. First ABC raided NBC for Barbara Walters, paying her one million dollars to co-anchor the news. When that approach did not bring in enough viewers, ABC offered the anchor job to both CBS’s Dan Rather and NBC’s Tom Brokaw. Both men leveraged ABC’s offers into main anchor jobs at the their respective networks, forcing both Cronkite and NBC’s John Chancellor into premature abdications of their anchor chairs.

With each successive negotiation, the main anchor amassed both more money and more power over the network newscast. But those newscasts had reached their peak. In the 1980s, government broadcast deregulation meant less pressure to fund and broadcast news programs, as viewers accumulated more viewing options through cable and satellite programming. New corporate owners of the three major networks started slashing news budgets, especially as viewers started drifting away from the broadcast networks' nightly newscast.

Even as bureaus were shut down and employees were fired, the salaries and power of the main anchors kept increasing, revealing the growing divide between the anchor and the rest of the news organization. An anchor’s perceived ability to bring viewers to the newscast trumped even the authority of the network news presidents, so the main anchor not only controlled the newscast, but also had heavy influence over the network news operation. As CBS News endured deep budget cuts in the mid-1980s, CBS’s Dan Rather briefly ended his newscast with the word, “courage.” Critics whispered he could show real courage by cutting his salary to save some jobs. Twenty years later, CBS tried to revive its news ratings by poaching Katie Couric from NBC, with disappointing results. With ratings increasingly tied to one or two major personalities, networks have invested heavily in news anchors while slashing jobs and salaries elsewhere. Sometimes – like with CBS’s hiring of Katie Couric – the results have been disappointing. Lucas Jackson/Reuters

The past thirty years have seen the network nightly news audiences getting smaller and older. Since younger people aren’t watching network news, one strategy has been to get the anchors to appear on programs that are more popular with these viewers. One of Brian Williams’ strengths was the ease at which he could change personas, from serious newscaster to genial talk show guest. Williams appeared on a number of entertainment programs – some more than once – including 30 Rock,Saturday Night Live, The Tonight Show, The Late Show and The Daily Show. His inflated Iraq war story didn’t raise too many eyebrows on entertainment programs, but when he presented that version onto the nightly news, the reaction was swift and harsh. Brian Williams was a frequent guest on the talk show circuit. NBC

Even with diminished importance, impact and audiences for the nightly newscast, news executives have made few changes to the overall format and have continued to bestow great power to the face of the nightly news, mainly because it is less expensive – and more likely to positively impact ratings – to pay one person a lot of money, as opposed to gambling on a new approach, or investing in more news gathering capabilities. But as NBC is learning the hard way, the impact on ratings can work both ways.

While many see the Williams suspension as a veiled half-year tryout for Lester Holt, one wonders if NBC – along with the other networks – might use this experience to re-examine the risky tradition of bestowing so much power, and salary, to just one member of a vast, multi-million dollar, legacy news operation.

By Mike Conway, Associate Professor of Journalism at Indiana University, Bloomington. This article was originally published on The Conversation. Read the original article.