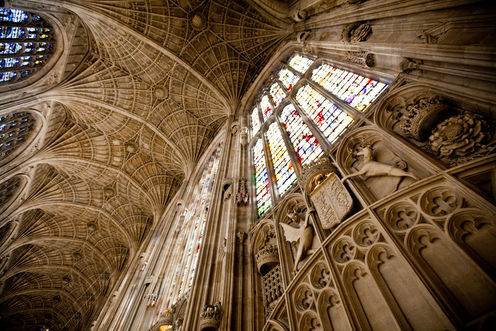 By Simon Blackburn, University of Cambridge

My idea of bliss is a Sunday walk that takes in first some English countryside, and second a pleasant medieval church, with some glass or woodwork or monuments. I once even wrote a piece, published in the Larkin journal, about his poem “An Arundel Tomb”, having done a little research on early 14th-century alabaster monuments and particularly the rare but lovely examples in which a knight and his lady are shown holding hands.

I have no religious beliefs – but I care about our culture, and its past and the transmission of its past, and those things were intimately bound up with religious language, music, architecture and attitudes to life and death. I dare say that even when I indulge these tastes my feelings fall short of being religious. If gratitude is among those feelings, it is because I am grateful to the men and women who created the countryside, or built the churches, or decorated them or wrote about them. If a feeling of consolation comes over me, as it may well do, it is because I find it consoling to think of the rolling centuries during which quiet lives were spent building the landscape and its glories.

My thoughts do not fly up further than that, and to tell the truth I am rather suspicious of those people who claim theirs do. I like the saying that religions are like public swimming pools – most noise comes from the shallow end. If I were to claim affinity with a religious tradition, it would be the apophatic tradition, the via negativa whereby silence is the best expression of any supposed apprehension of the divine, perhaps along with smiles, or dances or music, or even poetry – but not dressed up with beliefs.

But of course the past is quiet as well. It is not in the business of telling me what to do. The dead do not now want to segregate the schools my children can go to, or play a larger role in public policy than is indicated by the idea of one man one vote, or prevent me from dying, when the time comes, in whatever way might diminish such pain and indignity as nature might otherwise have in store for me.

Churchmen often do want to do these things, and so-called religious leaders in many parts of the world want to do much more, which might well including disenfranchising, locking up, or killing people such as me, as, historically, some of those commemorated by the tombs and windows and effigies would not doubt have been able to do, and have wanted to do.

The great thing about silence, as an expression of the religious spirit, is that one person’s silence is the silence of everyone. Silence generates no sects or schisms, heresies or persecutions. It does not separate those of one creed from those of another. Perhaps for just that reason it cannot by itself serve as a religion.

The anthropologist Emile Durkheim thought the essence of religion, the living nerve, was the separation of the sacred from the profane – and that, by ritualizing this division, societies induced in their members respect for the congregation, or collective, or tribe.

In Monty Python and the Holy Grail a band identifies itself as the “Knights who say ‘Ni’”, and thereby cement their identity as a separate group. The thing seems absurd, but the arbitrary designation of a place as holy, or a text as unquestionable, or a date as that on which some ceremony must be done, does the same.

Trouble then arises, since we – who do this – are now separate from them – who do not. Furthermore the status accorded to the otherwise arbitrary symbols, whereby they demand obedience and deserve veneration and worship, requires belief of some kind in some power or some invisible spirit to sustain it, and so spring up unreason and dogma to give the theory behind the symbols, and then a whole caste of priests and magi, licensed to interpret the divine in whatever way commends itself to them.

If I were a religious person, I would suppose that theology, with all these claims to knowledge and authoritative interpretation of divine will, is essentially blasphemous. Anything even approximating to the god of the monotheistic religions cannot be known, or interpreted, or touched or pictured. The idea that such a thing (or non-thing, outside space and time) exists affords no inferences about what to do, how to behave, how to dress or eat or conduct your sex life. The blasphemy is to anthropomorphize it, make it like ourselves, jealous, angry, needy, vengeful, or even loving.

It is, surely, the height of arrogance to claim an ability to interpret its will, even if doing so were more sensible than trying to work out what any other non-spatial, non-temporal, abstract necessary being, such as the number three, wants for humanity.

So we are on our own. I do not find that threatening, or a cause for lamentation. We have problems, but then we have institutions and experience to help us to solve them. We need ethics – and have ways of implementing ethics, by way of language, law, government, stories, examples and – for children, smiles and frowns and carrots, if not sticks. They work, at least until things start to unravel, but then they are also our best hope for stopping things from unraveling.

A humanist is simply someone who constantly bears this in mind – and constantly values the great work of communicating how much it matters.

Simon Blackburn, Emeritus Professor of Philosophy at University of Cambridge, does not work for, consult to, own shares in or receive funding from any company or organization that would benefit from this article, and has no relevant affiliations.