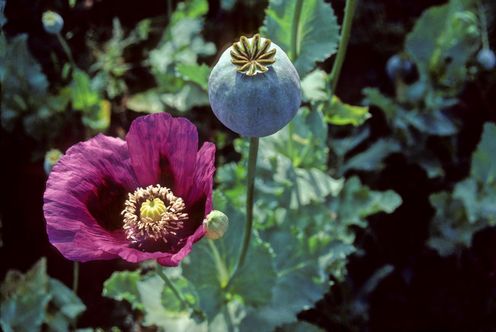 Soon to be grown for ornamental use only.Credit: Mark Nesbitt and Samuel Delwen, CC BY

The past few decades have seen enormous progress being made in synthetic biology – the idea that simple biological parts can be tweaked to do our bidding. One of the main targets has been hacking the biological machinery that nature uses to produce chemicals. The hope is – once we understand enough – we might be able to design processes that convert cheap feedstock, such as sugar and amino acids, into drugs or fuels. These production lines can then be installed into microbes, effectively turning living cells into factories.

Taking a leap in that direction, researchers from Stanford University have created a version of baker’s yeast (Saccharomyces cerevisiae) that contains genetic material of the opium poppy (Papaver somniferum), bringing the morphine microbial factory one step closer to reality. These results published in the journal Nature Chemical Biology represent a significant scientific success, but eliminating the need to grow poppies may still be years away.

More than bread and booze

If dog has been man’s best friend for thousands of years or more, the humble yeast has long been man’s second-best friend. The single-cell organism has been exploited by human societies to produce alcoholic beverages or bread for more than 4,000 years.

Like any animal or plant that mankind domesticated, there has been a particular interest in the study and optimisation of yeast. When breeding turned into a scientific discipline, it quickly became a model organism for biological experiments. And in 1996, its complete genome was the first sequenced from a eukaryotic organism – the more advanced tree of life. This extensive knowledge of yeast biology makes it an attractive platform for synthetic biology.

In the new study, Christina Smolke and her team further show that yeast could be a good candidate for the production of opioids – a class of drugs that includes morphine. To achieve this transformation, Smolke would need a complete biological pathway required to produce complex opioids.

In 2008 she got the first hint on successfully fermenting simple sugars to make salutaridine, an opioid precursor. Then in 2010, a Canadian team identified the last two missing pieces of the morphine puzzle in the genome of opium poppy.

Using these biological parts from plants, together with some from bacteria, Smolke has now created yeast that can produce many natural and unnatural opioids. All it takes is to feed the microbes an intermediary molecule extracted from the poppy plant called thebaine.

These results bring the technology one step closer to microbial factories that can produce pharmaceutical molecules in a tank rather than in the field. What is left now is for Smolke to find a way to turn salutaridine into thebaine efficiently. Filling this gap may allow her to create a yeast strain producing opioids directly from sugars.

There have been other synthetic biology landmarks in the past. In 2006, chemical engineer Jay Keasling of the University of California at Berkeley and his team successfully introduced genetic material from the sweet wormwood plant (Artemisia annual) into yeast. Their microbial factory was able to produce artemisinic acid, which is only one chemical step away from artemisinin, the most efficient drug against Plasmodium falciparum malaria. The success story of Keasling’s artemisinic acid microbial factory drew a lot of attention and in 2008, pharmaceutical giant Sanofi licensed the engineered yeast to bring the microbe from the lab into real-life factories. Eight years and a great deal of improvement later, the first doses of the drug produced using their method are hitting the market. Using a process that lasts less than three months and without cutting a single tree, the French company has now produced tons of artemisinic acid, or the equivalent of millions of treatments.

Away from the spotlight, others have followed similar routes and spent time teaching yeast how to produce various chemicals and commodities, in particular fragrance molecules or polymer precursors. Evolva, a synthetic-biology company based in Switzerland has a ten-year history of synthetic biology development and is now making profit with a vanillin-producing microorganism.

Engineered yeast has a significant advantage over crops or their genetically modified copies. Not only does it not require any land, but also the final products, such as Evolva’s vanillin, are chemically identical to the one isolated from natural sources and do not need to be labeled as “GM”. Finally, microbial factories are contained in reactors, effectively removing the risk of environmental contamination that open-field genetically modified cultures represent. But there are other risks that are rarely evaluated.

Despite all the hype and promises that synthetic biology could produce antimalarial therapy cheaply and reliably, some cautionary steps are necessary. The highly subsidized and volatile artemisinin market, together with the socio-economic impact of removing the need for wormwood plant cultivation, have put both a whole population of African patients and Asian farmers at risk. And so far, costs of producing the synthetic version are still similar to extracting the drug from natural sources.

Similar to artemisinin, opioids are manufactured from natural precursors that come from opium poppy fields found in few regulated areas in Turkey and on the island of Tasmania. Because of their use as recreational drug, their production is under the supervision of the International Narcotics Control Board.

Using microbial factories to produce morphine will need to be tightly regulated. Possible consequences on price, supply chain and narcotics oversight will have to be considered seriously. This mean that the technology may be delayed even further. But it could also make regulators' lives easier if opium doesn’t need to be grown on farms.