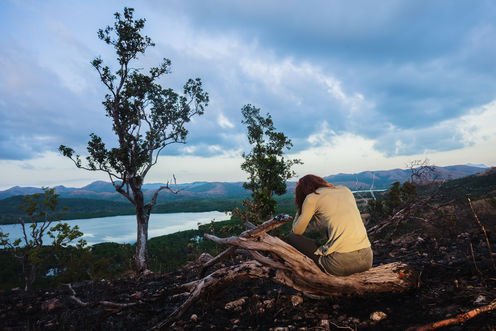 Mindfulness as a psychological aid is very much in fashion. Recent reports on the latest finding suggested that mindfulness-based cognitive therapy is as effective as anti-depressants in preventing the relapse of recurrent depression.

While the authors of the paper interpreted their results in a slightly less positive light, stating that (contrary to their hypothesis) mindfulness was no more effective than medication, the meaning inferred by many in the media was that mindfulness was superior to medication.

Mindfulness is a technique extracted from Buddhism where one tries to notice present thoughts, feeling and sensations without judgment. The aim is to create a state of “bare awareness”. What was once a tool for spiritual exploration has been turned into a panacea for the modern age — a cure-all for common human problems, from stress, to anxiety, to depression. By taking this “natural pill” every day, we open ourselves up to the potential for myriad benefits and no ill-effects, unlike synthetic pills, such as anti-depressants, whose potential for negative side-effects we are all aware of.

We don’t know how it works

Mindfulness has been sold to us and we are buying it. After all, thousands of studies suggest that it produces various kinds of measurable psycho-biological effects. However, despite what is commonly propagated, the idea that science has unequivocally shown how meditation can change us is a myth.

After examining the literature from the last 45 years on the science of meditation, we realized with astonishment that we are no closer to finding out how meditation works or who benefits the most or the least from it. Buddha-based but far from it. Shutterstock

The few available meta-analyses report moderate evidence that meditation affects us in various ways, such as reducing anxiety and increasing positive emotions. However, it is less clear how powerful and long-lasting these changes are — does it work better than physical relaxation for example? Or than a placebo? The evidence on this is contradictory and inconclusive.

Mindfulness-based cognitive therapy is an eight-week group therapy program blending cognitive education with mindfulness techniques. It was designed specifically as a treatment to help prevent individuals who have experienced recurrent depression from further relapse. As well as weekly group sessions, participants are encouraged to engage in daily mindfulness meditation at home throughout the course. This mindfulness therapy is growing in popularity, with recent calls for it to be more widely available on the NHS.

Yet we still can’t be sure what the active ingredient is. Is it the meditation itself that causes the positive effects, or is it more to do with learning to step back and become aware of our thoughts and feelings in a supportive group environment? And why does it only work for some?

Mindfulness is presented as a technique that will have lots of positive effects – and only positive effects. It is easy to see why this myth is so widespread. After all, sitting in silence, focusing on your breathing or being aware of the flow of thoughts and feelings would seem like a fairly innocuous activity with little potential for harm.

But considering that many of us rarely sit alone with our thoughts, it isn’t hard to see how this might lead to difficult thoughts and emotions rising to the surface for some people – which we may, or may not, be equipped to deal with. Yet the potential for emotional and psychological disturbance is rarely talked about by mindfulness researchers, the media, or mentioned in training courses.

And here we come to an important point. Buddhist meditation was designed not to make us happier, but to radically change our sense of self and perception of the world. Given this, it is perhaps not surprising that some will experience negative effects such as dissociation, anxiety and depression. However, like the small print on medication, these “side-effects” in some individuals are not what the creators of this pill are concerned with promoting.

For some, penicillin is life saving; for others, it induces a harmful reaction. Just because your friend or family member responds to a pill a certain way, does not mean you will respond in the same way. The same is also true with mindfulness: for some, it may be very effective or it may not work at all, for others, there may be harmful effects.

Mindfulness has been separated from its roots, stripped of its ethical and spiritual connotations, and sold to us as a therapeutic tool. While this may not deny its power as a technique to change our state of consciousness and with implications for mental health, it arguably limits its “naturalness”, as well as its potential – at least as originally intended.

Many Buddhists are critical of the use of mindfulness for purposes which are very different from the radical shift in perception they aim for — the realization of “emptiness” and liberation from all attachments. Instead, as Giles Coren recently claimed, this technique has been turned into a McMindfulness which only reinforces one’s egocentric drives.

The idea that each of us is unique is a cornerstone of individual-based therapy. But with mindfulness-based approaches there is little space for one’s individuality, in part because it’s a group practice, but also because there has been no serious attempt to address how individuals react differently to this technique.

So if you go into it – as with taking any other kind of pill – keep your eyes open. Don’t consume mindfulness blindly.

By Miguel Farias, Reader in Cognitive&Biological Psychology at Coventry University, and Catherine Wikholm, Trainee Clinical Psychologist at University of Surrey. This article was originally published on the Conversation. Read the original article. Top image credit: Shutterstock