Nuclear power is sometimes described as being free of greenhouse gas emissions, and that’s true of the nuclear fission reactions themselves. But here is a list of all the stages of the nuclear power cycle at which greenhouse gases are emitted: uranium mining, uranium milling, conversion of uranium ore to uranium hexafluoride, uranium enrichment, fuel fabrication, reactor construction, reactor decommissioning, fuel reprocessing, nuclear waste disposal, mine site rehabilitation, and transport throughout all stages.

During these stages, greenhouse gases are emitted directly (for instance, by trucks) but also indirectly (such as through the use of materials such as steel and cement, which are manufactured using emissions-intensive processes).

Quantifying all these emissions is a complicated prospect, but we can attempt to do it using a method called “life-cycle assessment”. The result of one such estimate (with which I agree) is quoted in the Intergovernmental Panel on Climate Change’s Special Report on Renewable Energy Sources and Climate Change Mitigation (see pages 731-2). 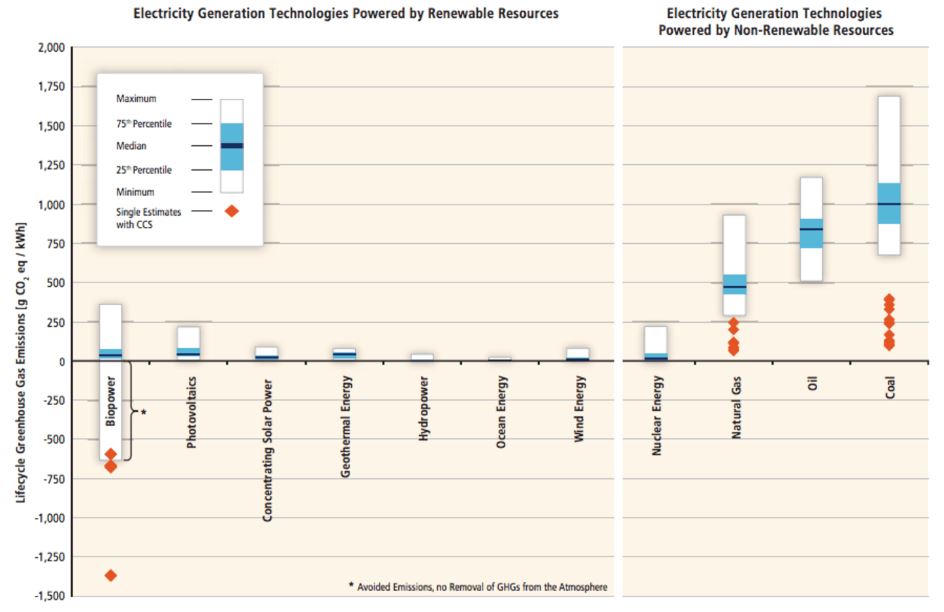 How nuclear stacks up against other energy sources in terms of life-cycle emissions. IPCC Special Report on Renewable Energy Sources and Climate Change

This shows that despite the long list of stages at which greenhouse gases are emitted, and based on what researchers have been able to take into account so far, the overall life-cycle emissions for nuclear power are likely to be lower than for fossil fuels.

My review of various estimates suggests that the greenhouse emissions from nuclear power vary from 10 to 130 grams of CO2 per kilowatt hour of power, with an average of 65 g per kWh – or roughly the same as wind power. For comparison, coal power has emissions of about 900 g per kWh, and gas-fired power about 450 g per kWh. About 15-25% of nuclear’s greenhouse emissions come from building, maintaining and decommissioning the nuclear power plant.

Another analysis, by energy consultants Jan Willem Storm van Leeuwen and Philip Smith, forecast that the emissions from nuclear power could ultimately rival those from natural gas. But this high estimate is a clear outlier among the results shown in the IPCC assessment, and this was largely because it assumed that uranium mines will need to be fully restored to “greenfield sites” – something that most analysts have not considered necessary.

But why is the range of accepted estimates so broad? To answer that here’s another list, of factors that can influence the calculation: the grade (purity) of the ore; the uranium enrichment method; the age and efficiency of the reactor; and the assumptions used in the calculation method. Unfortunately, these assumptions can have a large effect on the outcome – indeed, they are probably the biggest source of variation between competing analyses.

Some analyses choose to ignore many of the supply-chain processes – such as, for instance, the greenhouse gases emitted during the mining of iron ore needed for making steel, which is needed for making trucks, which is needed for transporting the cement used to build a reactor. And so on, millions and millions of supply chains. It is all fiendishly complicated, of course, but ignoring these supply-chain contributions leads to significant systematic errors.

The ore grade also has a significant impact on the overall emissions, because the less pure the ore, the more material has to be processed to extract the uranium. The calculation is made even more complicated by the fact that in some mines, such as Australia’s Olympic Dam, uranium is extracted as a by-product of other mining (in this case copper), meaning that not all of the greenhouse emissions should be attributed to the uranium.

Once the uranium is out of the ground and has been milled to form the dry ore concentrate called “yellowcake”, it must then be “enriched” to increase the proportion of fissile uranium enough for it to work as nuclear fuel. Each method has different greenhouse emissions: centrifuge enrichment, for instance, needs much less energy than gaseous diffusion. The fuel rods are zero-emission once you get them into the reactor - but getting them to that stage is not. Ruslan Krivobok/Russian International News Agency/Wikimedia Commons

The final factor to consider is the greenhouse emissions associated with cleaning up the uranium mine. The energy needed essentially depends on judgments of what constitutes safe practices with regard to minimizing radioactivity and exposure to toxic heavy metals in the leftover mine tailings.

At the time of extraction of the uranium from the ore, about 85% of the original radioactivity remains in the mill tailings, mainly as isotopes of thorium and radon. While emissions and safety standards have vastly improved since the 1950s, it is still not clear how safe the current mine rehabilitation efforts are.

According to the United Nations Scientific Committee on the Effects of Atomic Radiation (UNSCEAR), the global component from mill tailings is the most significant source of radiological exposure in the entire nuclear fuel chain. Activities at the uranium mine have a bearing on greenhouse emissions, as well what happens at the nuclear reactor itself. Dustin M. Ramsey/Wikimedia Commons, CC BY-SA

The main reason that Storm van Leeuwen and Smith’s estimate of life-cycle emissions was so high is that they assumed that uranium mine tailings will need to be dealt with by sandwiching them between layers of bentonite clay to contain the radiation. Yet my review of the available data suggested that current mine rehabilitation leads to average radiological exposures that are less than one-tenth of the doses received by people living in locations with naturally high concentrations of radioactive elements in soil and rocks, where no increased lung cancer incidence has been detected.

If this is true, and barring any wider safety management issues, it suggests that there is no need to adopt new, emissions-intensive measures to rehabilitate uranium mines.

Like in any other scientific assessment, our conclusions about the nuclear fuel cycle are based on what we know, and our knowledge is still incomplete. There are still uncertainties, especially when it comes to making judgments about how to deal with radioactive decay processes that will continue for thousands of years. Our results are also often based on average conditions, and do not take into account extreme events such as reactor accidents or nuclear waste spills.

One thing is clear though: ultimately, the greenhouse emissions from nuclear power are a product of the fact that almost every aspect of the process, bar the nuclear fusion itself, requires energy – and it is still the case that most of the world’s energy comes from fossil fuels.

Manfred Lenzen is Professor of Sustainability Research, School of Physics at University of Sydney. This article was originally published on The Conversation. Read the original article.