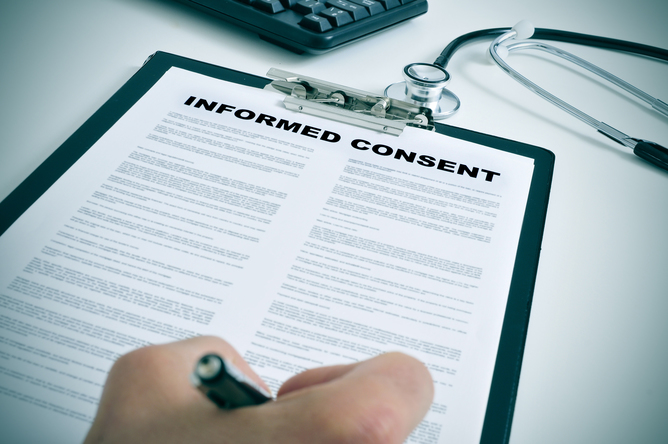 Ongoing developments in stem cell science mean that researchers often have no idea how, one year down the line, they will use specimens of human biological material.

But when a scientist takes a swab of your saliva, a sample of your blood or a piece of your skin to research a particular disease, how do you know that it’s going to be used for the intended purpose? And when it is used for research in a different condition, can you take any action? This is where informed consent comes in.

Informed consent is an important part of medical research. It is the process by which a person agrees to be part of a scientific study and then donates their biological material. The person can either agree for their sample to be used in a specific study or give broad consent for it to be used widely for research.

Medical research involving humans and the collection of their biological material should ideally work towards helping the study’s participants to be cured. And when people participate in research, they must be told all the details of the research in a way that leaves them with no uncertainty about their rights in the study. The content should be clearly explained and translated into simple language.

In reality, researchers often give participants information that is not always understood because complicated scientific language is used. This is a major challenge for patients, medical scientists and medical doctors across the world.

In stem cell research, there are three different types of stem cells that can be donated which need informed consent from participants.

Induced pluripotent stem cells are adult stem cells that are reprogrammed in the laboratory to behave like embryonic stem cells. In the hands of skilled researchers, they can develop into many cell types. Induced pluripotent cells are used as cellular or biological models of certain diseases, called disease-in-the-dish modeling. The results of this type of research could potentially be used to treat some of diseased or damaged tissue.

The ability of pluripotent cells to become a part of a fully functional normal tissue is still unproven. But many animal studies and some human studies are providing exciting prospects. These stem cells are the most complex.

While they are not yet being used for treatment, they have great potential for future research and the scope and extent of their use is wide. At UCT they are currently used as “disease-in-the-dish” models in the laboratory only. It is impossible to anticipate the full range of their future application.

What’s wrong with the forms

Before any research can go ahead, a patient must complete a customized form. The way researchers get informed consent is guided by recommendations in the Declaration of Helsinki, a set of ethical principles around human experimentation and research using human biological material. It was drawn up in 1964 and has subsequently been revised by the World Medical Association’s committees seven times, including once in South Africa in 1996 and most recently in Brazil in 2013. It is the ultimate guideline around human research ethics.

Researchers are expected to use simple non-scientific terms in the informed consent forms. But because stem cell research is such a complex topic, it may be difficult for patients to understand the scientists' research intentions. This is particularly true in a developing technology, which is still often in the realm of the unknown.

In the past, questions have been raised about whether or not patients understand the complicated and scientific content of consent forms. To overcome this, professionally trained staff are being employed to explain the risks and benefits of stem cell research to participants. But this is still a relatively new practice across the globe and South Africa has less than 20 appropriately trained and registered genetic counselors. There is an urgent need for more.

Their job would be to:

For South Africa to continue to develop the capacity to incorporate new biomedical technologies, such as those in the stem cell field, it must proactively formulate clear guidelines for the oversight of informed consent. This should ideally cover future anticipated and potential unanticipated use of stem cells in research.

Leslie Jacqueline Greenberg is Professor of Human Genetics: Stem Cell Researcher at University of Cape Town. This article was originally published on The Conversation. Read the original article.