But the debate over stem cells is no longer between adamant pro-lifers and research scientists anymore, it has grown into multiple debates over the efficacy, ethical implications, and overall viability of the different types of stem cells available.

Currently there are countless research teams, labs and centers across the nation striving to enable stem cell into practical medical therapies that will treat disease. However, which stem cell types they are using is anyone's guess. Currently there are multiple types of stem cells, each with their own proponents and advocates and members from other camps, casting doubt on the likelihood of the research being brought to fruition. 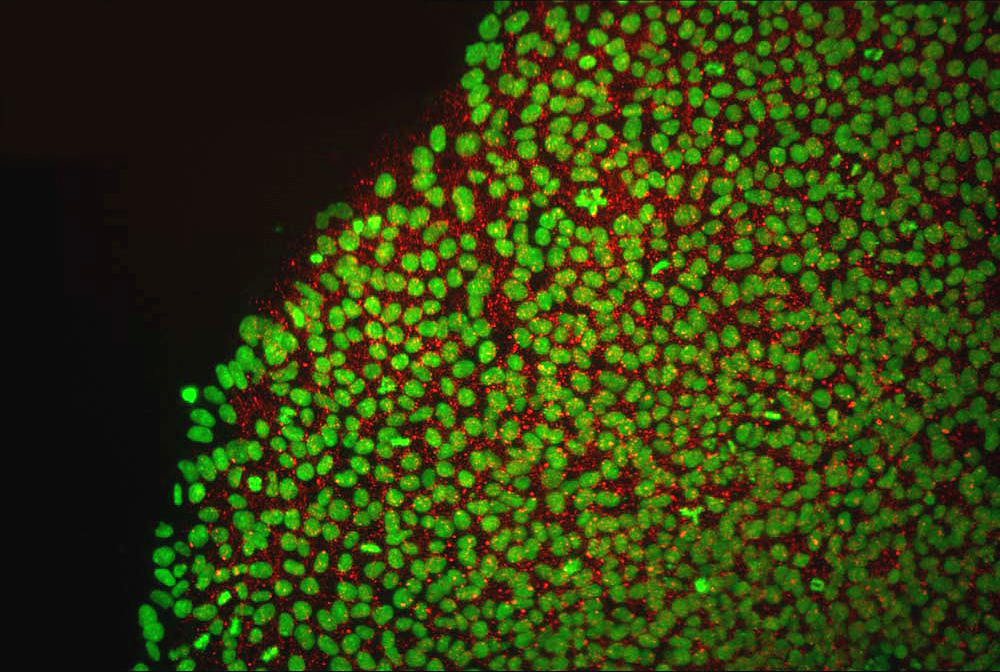 "This image depicts a colony of human embryonic stem cells grown over a period of 10 months in the absence of mouse feeder cells. The cell nuclei are stained green; the cell surface appears in red." Photo courtesy Ren-He Xu 2004, University of Wisconsin

Embryonic stem cells are the big players on the field of stem cell research. Human based embryonic stem cells research (hesc) takes fertilized embryos and creates whatever cells are needed. Embryonic cells are fully undifferentiated cells, meaning that they have the potential to create whatever organs, body systems or cell types are needed. However, the ethical problems arise due to the fact that those fertilized embryos are also capable of becoming a complete human life. Other problems arise due to the fact that hesc research is centered around placing foreign cells into another human. Immune rejection is a big problem with current hesc research. "The adult stem cell is an undifferentiated cell that is found in a differentiated  tissue; it can renew itself and become specialized to yield all of the specialized cell types of the tissue from which it originated. Adult
stem cells are capable of self-renewal for the lifetime of the organism. Unlike embryonic stem cells, at this point in time, there are no isolated adult stem cells that are capable of forming all cells of the body. That is, there is no evidence, at this time, of an adult stem cell that is pluripotent." Caption and Photo credit: National Institutes of Health, Stem Cell Information

Adult stem cells are another option, and advocated heavily by members of the scientific community and public combined. The adult body, although most cells are differentiated, we still have certain types of stem cells that are capable of replacing other cells. We have stem cells with limited differentiation in our adult bodies. Stem cells have been identified in the bone marrow, cornea and retina, liver, skin, pancreas as well as the adult kidneys and gastrointestinal tract. Using adult stem cells avoids the ethical issues surrounding the embryonic stem cells and also the immune rejection due to use of the body's own DNA, but the amount of therapy is limited because the differentiated cells are capable of only certain developments. Recently, a team headed by Dr. Robert Burt, from Northwestern University made a breakthrough in MS treatment, showing reversal of the disease using adult stem cell therapies. New research has also developed methods to re-program adult stem cells to resemble their embryonic counterparts. However, other applications of this research have yet to be established.


Although all three camps have initial promising results and practical applications, the debate still rages on about the best possible method to treat disease with the least amount of consequences. Needless to say, we will all be watching with interest so see which, if not all therapies will be unitized in the future.
Erin's Spin
More Articles All Articles
About