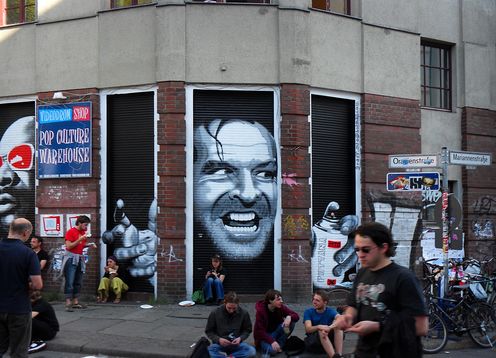 I have a wife, three children, three dogs, seven cats. I’m not a Franz Kafka, sitting alone and suffering.

So wrote Stanley Kubrick in 1972. And indeed, Kafka and Kubrick may not seem to have a whole lot in common. Kafka is Czech, Kubrick American.

But watch The Shining after reading this and you may find that the Czech author haunts The Overlook Hotel just as much, if not more, than any of its regular spectral figures. This year marks the 100th anniversary of the publication of Franz Kafka’s The Metamorphosis, as well as the 35th year of Stanley Kubrick’s film version of The Shining. So what better time than to explore this curious relationship?

Kubrick was an avid reader of Kafka’s fiction and named him among his favorite authors. Kubrick’s ancestors, like Kafka, hailed from parts of the Austro-Hungarian empire, and so this may well have been because of their shared central European and Jewish heritage.

Even before he made The Shining, Kafka’s influence is detectable in Kubrick’s films, including Lolita (1962), Dr. Strangelove (1964), 2001: A Space Odyssey (1968), and Barry Lyndon (1975). But it is in The Shining that Kubrick really showcases his Kafkaesque influences.

Kafka is a ghostly presence in The Shining in a number of ways. There is in particular, as outlined by Mark J Madigan a superficial resemblance to The Metamorphosis, in which a traveling salesman named Gregor Samsa awakens one morning to find himself transformed into a giant insect-like creature, possibly a beetle. This transformation from human to beast ironically frees Gregor from life in modern society and liberates his family to achieve happiness without him.

Like Gregor, Jack Torrance (Jack Nicholson) awakens from troubled dreams. His family is horrified but still recognize him as their own Jack, albeit transformed. Eventually, though, as in The Metamorphosis, they realize that he is no longer the same Jack, and that it would not be such a bad thing for him to disappear. Reinforcing this connection are the Volkswagen Beetle that Jack drives in the film’s three minute-long opening credits and Jack’s later mimicry of the wolfish commercial traveler.

Kubrick draws upon Kafka’s own obsessions. Father/son relations and generational conflict feature prominently throughout Kafka’s work. Hostility, or fear, of the godlike father, in particular, pervades his writing – he had, in his own words: “written myself almost into a hatred of my father” – which was immortalized in his letter to him. Diane Johnson, who co-wrote the screenplay of The Shining, explained that Kubrick was drawn to Stephen King’s novel because of its similar “psychological underpinnings” of a raging father threatening to kill his only son.

In a 1980 interview, Kubrick explicitly identified Kafka’s work as the template for the film. He singled out Kafka’s “realistic approach” in which the fantastic and allegorical was rendered as ordinary, everyday, journalistic even. This was felt in the film through Kubrick’s creation of a bright, contemporary hotel (itself a composite of real-life places) rather than a dark, creepy castle or haunted house so typical of the horror genre in the past.

There are more nods, yet more ghostly. Shelley Duvall’s previous role, for example, had been a cameo in Woody Allen’s Annie Hall (1977). Playing Pam, one of Alvy Singer’s lovers, she tells him: “Sex with you is really a Kafkaesque experience.” Three years later, Duvall herself would be suffering a Kafkaesque experience at the hands of another Jewish New York director, this time Stanley Kubrick in his alleged mistreatment of her.

Yet another connection to Kafka is provided through the use of a hotel or sanatorium as a metaphor for central Europe. The Hotel Occidental in Kafka’s Amerika (1927), published one year before Kubrick was born, is suspiciously Central European.

The Shining was also surely influenced by Alain Resnais’s Last Year at Marienbad (1961). Among the many similarities are the shared locations in labyrinthine hotels which disorient the viewer in their maze-like layouts. In fin-de-siècle Europe and continuing until the 1930s, spas such as Marienbad had become recognized as “Jewish” such that Sholem Aleichem wrote about Polish Jews swanning around the eponymous spa town in his Marienbad (1911). One such real-life visitor, in July 1916, was Kafka himself, who wrote: “There are ghosts that haunt one in company and those that haunt one in solitude.”

This diary entry from Kafka certainly provides a fitting coda to The Shining. It could, almost, be a tagline for the film.