The Smell Of Death Could Become A Powerful Forensic Tool
By The Conversation | September 28th 2015 07:00 AM | Print | E-mail 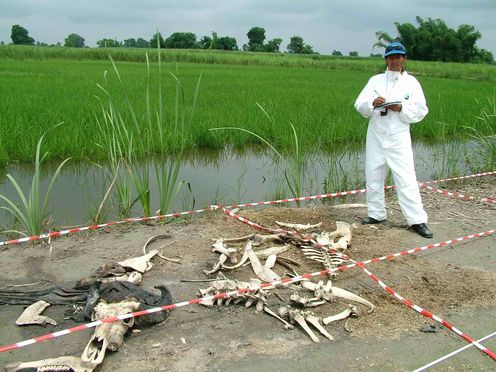 Most people are able to recognize the smell of “death” when they encounter a dead animal on a farm or a roadkill.

But despite its distinctive scent, few know why it actually smells the way it does. Even forensic scientists may not have identified all of the compounds behind it yet – they are still in the process.

Understanding the pattern of change of the chemicals that make up the scent during the process of decomposition could be of huge benefit to forensic science. Not only could it help determining the time of death of a victim, it could also lead to more scientifically rigorous training of cadaver dogs.

The smell of death is actually a very complex symphony of scents, with different notes waxing and waning as decomposition progresses. To date, more than 480 different volatile organic compounds have been captured and identified from human cadavers, and more than 800 have been identified from porcine cadavers.

My team (profiles here and here) has identified hundreds of chemicals given off by decomposing pig cadavers, both on land and under water. Porcine cadavers are frequently used for forensic research in the UK because of their physiological similarities to humans and the relative ease of obtaining them. There is currently no way for researchers to access human remains for this purpose, such as dedicated taphonomy facilities or “body farms”.

Our research used fluffy fibers to capture the gases given off by porcine cadavers enclosed in boxes, lying in air and in water, over a period of time. We then we used gas chromatography mass spectrometry (GCMS) to identify the individual volatile organic compounds absorbed by the fibers. GCMS identifies chemicals within a mixture on the basis of how long it takes each component to travel through a very long and thin column to an ionisation chamber and detector.

Surprisingly, some of the gases that make up the whole bouquet of death were actually quite pleasant – including hexanal and butanol. Hexane is associated with the smell of freshly-mown grass and butanol smells of leaf litter and forest floors.

These are present in the earliest stages of decomposition and then reappear in the very final stage, known as skeletonization. In addition, in the first few days after death, these are accompanied by the smell of hexadecanoic acid, which is often said to smell like “old people’s homes”. Some of the worst smells come somewhere in the middle of the decomposition process. Chemicals released during the bloat stage, which occurs about a week after death (depending on the surrounding conditions), when intestinal bacteria are reproducing uncontrollably and producing vast amounts of farty gases, are more likely to have you reaching for the sick bucket. For example, the dimethyl disulphide and trisulphide, bring the smell of garlic and the stench of rotting cabbage to the proceedings.

At this stage indole also makes an appearance in high concentrations, imparting a strong faecal smell. At low concentrations, however, indole has a pleasant, flowery fragrance and is used extensively in the perfume industry.

Once the active decay stage is underway, maggots hatch and munch their way through the flesh of the cadaver, breaching the intestinal walls. At this stage, some more unpleasant smells join the heady mix. These include 2-methylbutanoic acid – which smells distinctly of “cheesy feet” or teenage bedrooms – and trimethylamine, which is the aroma of days-old fish. In addition, there is a strong undercurrent of butyric acid, which reeks of vomit.

As decomposition progresses, these substances are joined by other chemicals, including intoxicating amounts of phenol, which has a sweet, burning-rubber type smell. By the time skeletonization occurs, the odor-producing bacteria have been replaced by more mechanical means of decay, and the obnoxious smells are replaced by more woody, wet notes.

Understanding the rhythm, rise and fall of these fragrant notes allows forensic scientists to attempt to decipher the “magic formula” that specially-trained cadaver dogs are looking for. Currently, we do not know exactly which combination of chemicals cause them to respond. If we did, we may be able to tailor the training aids of such dogs to find corpses at specific stages of decay – or under water – and improve the scientific rigor behind their training and assessment.

For example, it might be possible to stipulate that a certain combination of chemicals need to be recognized and consistently “indicated” on before a dog is allowed to be certified.

In the future, it may also be possible to use the various scents given off by a cadaver to determine cause of death, as some medical conditions may encourage certain bacterial growth. It could even be used to identify unknown individuals by using the scents like a “smelly fingerprint” using similar technology.

By Anna Williams, Associate Professor in Forensic Anthropology, University of Huddersfield. This article was originally published on The Conversation. Read the original article. Top image: Anil1956/wikipedia