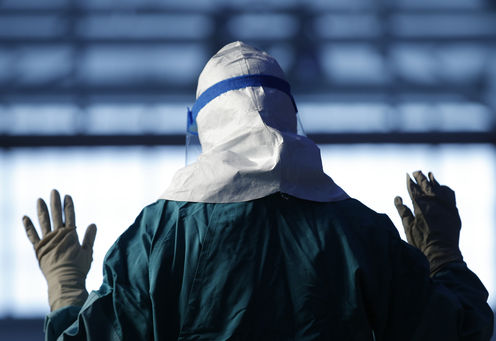 How much risk can health workers be asked to take on? Mike Segar/Reuters

From plague to tuberculosis to smallpox to SARS, health-care workers have put themselves in danger in the course of fulfilling their duties to care for others. Many have lost their lives doing just that.

The current Ebola outbreak is taking a serious toll on health-care workers: as of now, 443 are infected, with 244 dead. In West Africa, conditions in treatment centers are harsh, and all workers are required to follow strict protocols for use of PPE (personal protective equipment) first, and then turn to caring for patients.

In Europe and the US, 18 patients have been or are being treated for Ebola. Despite the reassurances by the American Centers for Disease Control about the abilities of high-resource health systems to handle Ebola, one Spanish and two American nurses contracted Ebola while caring for patients. A doctor who worked in Guinea for Doctors Without Borders, who recently returned to New York City, tested positive for Ebola, and is being treated there.

Officials say they are well prepared, but the global situation gives rise to some tough questions: just how much risk can health workers reasonably be asked to take on in their jobs of caring for sick patients, some of whom pose a serious danger to their health and lives? Should they be required to put their lives on the line for Ebola patients? Who gets to decide how much risk is too much?

Health-care providers everywhere are bound by professional codes of ethics, which affirm the obligation to care for patients even under conditions of risk to themselves.

For health-care workers in developing countries treating HIV, managing risk and duty to care has involved developing protocols and equipment for risky procedures like blood draws. In West Africa, where health care systems are poorly-resourced, under-staffed and overwhelmed by the influx of exposed and ill patients, experts argue that the lack of protection provided for health-care workers undercuts the professional obligation to care. Given that health care systems in West Africa are swamped and ill-equipped either to care for the thousands of Ebola cases or to protect the overburdened health-care workers, it’s clear that providers are acting well above and beyond the call of duty. But what about health-care workers in well-resourced countries like the US, UK, and Australia?

In well-resourced countries, hospitals have ample staff, modern equipment, medicines and facilities. Health-care workers are equipped and trained to perform invasive procedures like dialysis and intubation (which were done in Dallas).

These invasive procedures, however, put workers at very great risk. In contrast, in West Africa, taking care of Ebola patients mainly involves keeping them hydrated, offering them a few medicines, and monitoring them.

The availability of high-tech invasive procedures means much more, and more dangerous, contact with patients who are tremendously infectious. This is leading hospital officials in western countries to reconsider invasive procedures for Ebola patients.

Although this runs contrary to standard hospital policies and seems to conflict with duties to care, such proposals are being defended as necessary to protect staff. One bioethicist proposes a policy of not resuscitating, or performing CPR, on Ebola patients, despite what the patient’s wishes are. Since Ebola patients are at the height of their infectiousness, and worker exposure to bodily fluids is unavoidable, it may not be possible to perform it without endangering the medical team.

Another challenge to Ebola care in western hospitals is how to manage risk of health-care workers who have greater exposure and vulnerability — in particular, nursing staff and workers who clean and dispose of infected materials.

Typically, these health-care workers are less well represented in policy discussions about protocols and have less training, while they (nurses in particular) are in closest and most frequent contact with patients. Nurses’ unions have objected to the handling of the treatment of the Dallas Ebola patient, which resulted in two nurses becoming infected.

Public health ethicists recognize the need to find balance between duty to care and just treatment for health-care workers. Two values that will help guide discussions are reciprocity and transparency.

Reciprocity requires that, in return for taking on heroic jobs and serious risks, we recognize, appreciate, and most importantly protect and compensate health workers for their important roles in caring for the sick. For instance, paying workers quarantined after exposure, providing resources like food, health care, and communication will respect both public health needs and those of individuals.

Transparency requires that the processes by which hospital policy decisions are made and disseminated (for instance, what counts as a safe standard of care from the perspective of health-care workers) is made public and open. All stakeholders should have a voice in the process, from waste disposal staff to nurses to ambulance drivers. The National Nurses Union in the US has called for hands-on training for nurses nationwide and Spain has responded to similar calls for increased training as well.

One value that has, alas, gone by the wayside, is privacy. The doctor in New York with Ebola has had his name published in every major news outlet, as have other healthcare workers, including those who tested negative.

The burdens on the health-care worker Ebola patients and their families, the potential stigma from their communities — all of these need to be addressed by hospitals and government. Making infected or exposed health-care workers pay such a high social price in addition to the extraordinary jobs they do is way out of balance with justice.

Catherine Womack, Professor of Philosophy at Bridgewater State University, does not work for, consult to, own shares in or receive funding from any company or organization that would benefit from this article, and has no relevant affiliations.