Can earthquakes ever be predicted? This question is timely after the magnitude 7.8 earthquake that struck Nepal recently. If authorities had more warning that the earthquake was coming, they may have been able to save more lives.

While Nepal is a documented area of previous seismic activity, at the moment there is no technique that provides predictions of sufficient clarity to allow for evacuations at short notice. So if we cannot predict these events now, are there avenues of research to provide useful predictions in the future?

The key word here is “useful”. It is possible to make long-term forecasts about future earthquake activity, partly by using the past record of earthquakes as a guide. There is no reason to believe that a region of the Earth is going to behave differently in the next few thousands of years from its pattern over the same range back in time. In the short term, seismologists can draw on data from recording stations, with records going back roughly 40 years on a global scale.

Within hours of a major earthquake there are estimates of its epicenter, magnitude (the amount of energy released), the depth at which it originated, the orientation of the geological fault that caused it and the direction in which it moved. The event in Nepal was a thrust fault, meaning that the upper part of the Earth was shortened by a few meters, with the rock lying above the fault plane moving southwards over the rock lying beneath it.

Information about past earthquakes comes from a number of sources, not least historical records. But such records are incomplete, even in earthquake-prone countries with long traditions of documenting natural disasters, such as China and Iran. Other lines of evidence are available, including measuring and dating the offsets (movements caused by earthquakes) of man-made or natural features that can be accurately dated, such as the walls of a castle or a city. Faults cutting the Great Wall of China have been documented in this way.

Seismologists also dig trenches across faults known or suspected to be active, and can recover rocks and sediments affected by earthquakes. These events can dated, for example by radiocarbon analysis of plant remains disturbed by the faulting. Seismologists can assess earthquakes by measuring how much they move geological features. flickr/US Geological Survey, CC BY

By combining the earthquake ages with the size of the damaged areas, it is possible to understand earthquake patterns over hundreds or even thousands of years. Scientists use this information as a guideline for future behavior, but it is clear that the faults do not slip after the same period of time between earthquakes (the recurrence interval).

Nor does a fault necessarily rupture in the same place in successive earthquakes. An earthquake releasing stress along one fault segment may place more stress on an adjacent region, thereby increasing the earthquake likelihood in that area. This may occur soon after the original event, which explains the phenomenon of aftershocks. Nepal has already seen aftershocks of a magnitude greater than six, and is likely to see more.

Instrumental and historical records combine to make a global picture of earthquake activity. There are, unfortunately, many danger areas. Eurasia bears the brunt, because of the collision of the Indian and Arabian plates with the rest of Eurasia. Therefore China, Iran, Pakistan and India all share Nepal’s susceptibility to large earthquakes. Other danger areas lie along the margins of the Pacific and Indian oceans, where one plate slides under another in a process called subduction. Earthquakes at such plate boundaries can cause devastating tsunamis, like in Japan in 2011. 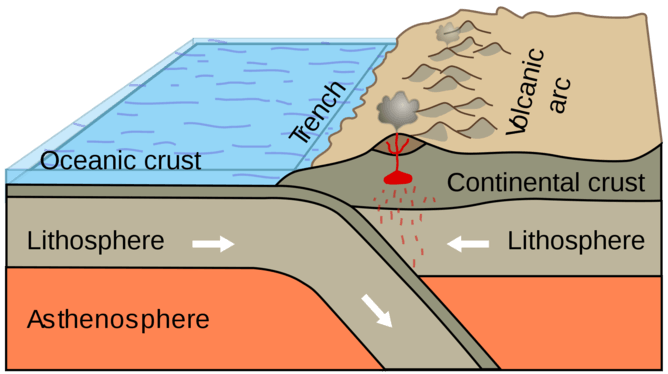 Areas where tectonic plates slide under one another are earthquake hotspots.

Newer lines of research include precise measurements of the movement of a fault during earthquakes and the motion of the Earth’s surface between earthquakes. Across the Himalayas there is around 20 mm of convergence (shortening) every year, roughly half of the overall convergence between the Indian and Eurasian plates. The remainder is accommodated further north, in ranges such as the Tian Shan and the Tibetan Plateau. In other words, every year a person in Siberia becomes roughly 40 mm closer to a person in central India, as the Earth’s crust deforms across the broad region between them.

This strain builds up over time and is released in an earthquake like the snapping of an elastic band. Faster strain, longer faults and greater strength in the upper part of the Earth in a particular region can all lead to larger earthquakes. The Himalayas feature a deadly combination of these factors, leading to very large events of the kind experienced on April 25.

It is not sensible to be naively optimistic about improvements in earthquake prediction, but all research on the past and present behavior of active faults is to be welcomed. It is timely that the UK’s Natural Environment Research Council has just announced funding for research into earthquakes and resilience to earthquakes.

By Mark Allen, Professor, Department of Earth Sciences at Durham University. This article was originally published on The Conversation. Read the original article.