We humans have an innate tendency to recognize patterns. This ability has helped us survive by learning important skills such as how to distinguish danger (predators and poisonous plants, for instance) from important resources (food sources and safe shelter) and knowing the right time of year to plant crops.

But the same ability can sometimes convince us we’re seeing a meaningful pattern when it isn’t there. Gamblers detect “patterns” in lottery numbers and roulette wheels, fortune tellers detect “meaning” in chance events and weave a story. As a society we carry all kinds of similar superstitions, such as “bad things happen in threes.”

A sudden increase in the number of patients with influenza being admitted to hospital in South Australia last week provides a good case in point. Should this event be seen as a sign of flu activity that could overwhelm hospitals and medical clinics across the nation?

Let’s take a step back. A few steps back, in fact, and think about a competition for picking the winning football team over a season.

There’s a lot of money in predicting winners, and surely it’s easy money, right? Pick the top teams each week, turn on the television and watch your predictions come true.

Of course, it’s not that easy. There are upsets. Sometimes the top teams play poorly, sometimes the bottom teams hit a patch of good form, sometimes the umpire or referee makes a game-changing call, and sometimes the prior form of the two teams doesn’t seem to matter one bit.

While stronger teams will tend to win more often than weaker teams over the course of a season, the outcome of each game is much less predictable. In fact, it’s stochastic, which according to Wikipedia, means:

… events or systems that are unpredictable due to the influence of a random variable.

But this isn’t the whole story. The more reputable Oxford English Dictionary defines the word as:

[a] pattern that may be analysed statistically but may not be predicted precisely.

Being stochastic doesn’t mean that there are no patterns or rules; it means that any individual outcome is subject to unpredictable effects.

Perhaps the simplest example of stochastic behavior is tossing a coin. As you know, the two possible outcomes – heads or tails – are equally likely.

Toss this hypothetical coin 1,000 times and you should find that you count about 500 heads and 500 tails — a clear statistical trend. But try to predict the outcome of a single coin toss and you’ll have only a 50-50 chance of being correct. While there is a pattern in the long run, each individual coin toss is unpredictable.

Stochastic events can be even more complicated where there are more than two possible outcomes. The probability of each outcome may be difficult – or even impossible – to calculate.

Each football game is a sequence of stochastic events; even if we rewound time and restarted the game under exactly the same conditions, we couldn’t expect the outcome to be the same.

But what does all of this have to do with an unexpected flu emergency? The spread of an infectious disease, such as influenza, is a stochastic process: a sequence of stochastic events where people who are infected with flu may or may not infect other people around them.

Look at the figure below, which shows the number of confirmed influenza cases in Melbourne every week for the years 2010 to 2014. 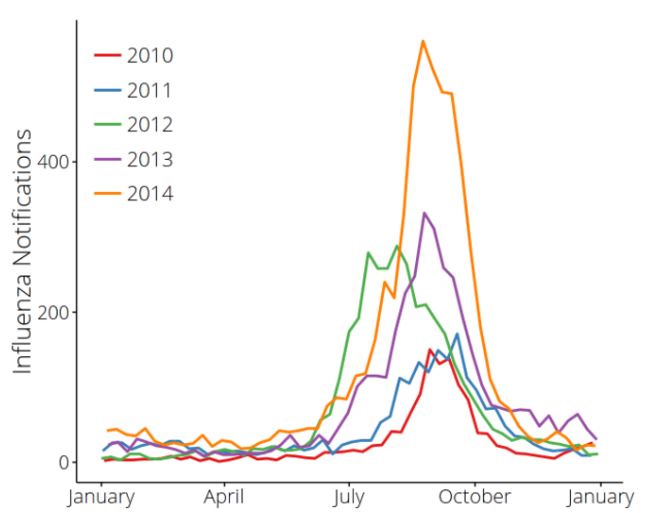 The number of confirmed influenza cases in Melbourne every week for the years 2010 to 2014. Author provided

There’s a clear bell-shaped curve every winter, where the number of influenza cases rapidly rises, peaks and then drops. But you can also see clear random variations from week to week. Why?

Consider someone who has recently caught the flu and is currently infectious. The number of people she infects (if any) depends on an astoundingly huge number of stochastic events.

Does she cover her mouth when coughing, or her nose when she sneezes, and does she wash her hands afterwards? Does she feel ill enough to stay at home? How many people does she live with, and how many of these people received the flu vaccine? Are most of the people she comes into contact with already infected or immune to this strain of the flu?

These are just a few of the most obvious factors that will determine how likely she is to infect a particular number of other people.

We can’t ignore stochastic effects when we’re trying to understand something as complex and variable as the spread of an infectious disease like flu.

Stronger teams will generally win more games of football than weaker teams. Likewise, the number of people infected with the flu will increase in the winter months and then decrease again.

But, for any given week, we can and should expect to observe random variations. One game doesn’t define a season and one week doesn’t define the yearly influenza outbreak.

So while a week of increased influenza hospitalization in South Australia is not good news, it’s also no cause for panic about the flu.