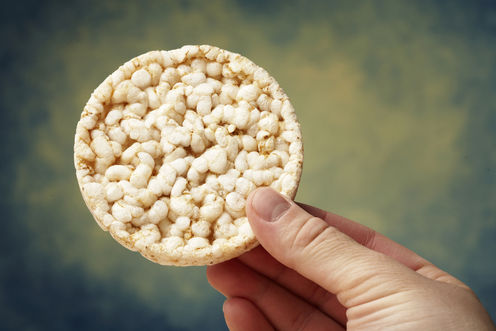 Puffed rice with a bit of poison. Shutterstock

There are two sides to rice: the grain that feeds half the world – and the primary carcinogenic source of inorganic arsenic in our diet.

Arsenic is a natural occurring element that is ubiquitous in the environment. It is present primarily as inorganic arsenic, which is highly toxic.

What sets rice apart is that it is the only major crop that is grown under flooded conditions. It is this flooding that releases inorganic arsenic, normally locked up in soil minerals, which makes it available for the plant to uptake. Rice has, typically, ten times more inorganic arsenic than other foods and, as the European Food Standards Authority have reported, people who eat a lot of rice are exposed to worrying concentrations. Chronic exposure can cause a range of health problems including developmental problems, heart disease, diabetes and nervous system damage. However, most worrying are lung and bladder cancers.

Children of most concern

The first food that most people eat is rice porridge, thought suitable for weaning as rice is low in allergens, has good textural properties and tastes bland. As babies are rapidly growing they are at a sensitive stage of development and are known to be more susceptible to inorganic arsenic than adults.

Babies and young children under five also eat around three times more food on a body weight basis than adults, which means that, relatively, they have three times greater exposures to inorganic arsenic from the same food item. The rice product market for young children, which includes biscuit crackers and cereals is booming. If the child is gluten intolerant then rice breads and rice milks can be added to this list. Gluten intolerant adults are also high rice consumers, as are those people of South-East Asian origin.

Rice milk is so high in inorganic arsenic that the UK Food Standards Agency issued the advice that children under the age of four-and-a-half should not drink rice milk. Despite this, you would be hard-pressed to locate this advice on product packing or displays.

Where are the regulations?

While there is tight regulation around inorganic arsenic in our water supplies in Europe but none for food, yet in Europe only 5% of our inorganic arsenic comes from water and 95% from food. Bottled water in the EU is around 50 times lower in inorganic arsenic water concentrations than rice. Therefore, you would need to drink five liters of water to get the equivalent arsenic dose of eating a small 100g (dry weight packet) portion of rice. The failure to regulate rice in food is unsustainable and needs to be rectified. The World Health Organisation and the Food and Agriculture Organisation of the UN have just announced guidelines for inorganic arsenic in rice: 200 parts per billion for white rice and 400 parts per billion (ppb) for brown rice. Brown rice is higher in inorganic arsenic than white as arsenic is concentrated in the bran that is removed by milling to produce white rice.

The aim of these limits is to ensure that the bulk of the global rice supply falls below these thresholds rather than directly focusing on the risk inorganic arsenic poses to humans – the particular dangers for children for example. Without doing this, the WHO thresholds are basically meaningless. They certainly do not protect those at greatest risk such as children and the high rice consuming countries of south-east Asia.

Further pronouncements by the European Union and the US Food and Drug Administration are imminent. Let us hope they take a more enlightened view than the WHO and set standards based on protecting human health. It is only when appropriate standards are set that the rice industry can proactively develop plans to remove arsenic from rice to meet those standards.

Standards need to be set to protect those most at risk and 50 ppb for children and 100 ppb for all rice products would be achievable with concerted effort of regulators and industry, though – as every dose of inorganic arsenic carries a risk – the lower the better.

What can be done now?

Changing dietary practice and food consumer advice to reduce rice in diets is also an option. There are a range of gluten-free alternatives to rice, so rethinking baby foods is an obvious way to proceed. Top of this list of rice alternatives for baby foods and for breakfast cereals, biscuits and snack bars marketed at young children is oats, which have a range of other health-giving properties.

Andy Meharg, Professor of Plant and Soil Sciences at Queen's University Belfast, does not work for, consult to, own shares in or receive funding from any company or organization that would benefit from this article, and has no relevant affiliations.