Tommaso Dorigo
What is spectroscopy ?
(A) the observation of ghosts by infrared visors or other optical devices
(B) the study of excited states of matter through observation of energy emissions

If you answered (A), you are probably using a lousy internet search engine; and btw, you are rather dumb. Ghosts do not exist.

Otherwise you are welcome to read on. We are, in fact, about to discuss a cutting-edge spectroscopy measurement, performed by the CMS experiment using lots of proton-proton collisions by the CERN Large Hadron Collider (LHC).

Indeed, the data used are a lot: 80 inverse femtobarns of it - a larger data sample than almost anybody has had the pleasure to look at in a single analysis. These high-statistics measurements are now becoming common, as the LHC is producing data at an increasing pace. And high statistics is a good thing, as it improves the precision of all our measurements, enabling new insights in the structure of matter at the smallest distance scales.

To realize how many collisions correspond to 80 inverse femtobarns, imagine two protons that bang into one another. Then imagine a billion of these. Well, that's still short by a factor of 10 million!

The rarity of the processes studied in the recent CMS analysis discussed here is apparent if we uncharacteristically start from the end. So please consider the graph below, which pretty much is the money plot at the end of the scientific article now submitted for publication to the prestigious Physics Review Letters. It is a histogram showing the reconstructed invariant mass of two ephemeral particles, which I will describe below. The number of entries in the histograms is less than 2000, so a pretty wild reduction has taken place in selecting the events of interest - it's like each of the guys plot here won a few trillion dollars with a one-dollar ticket. 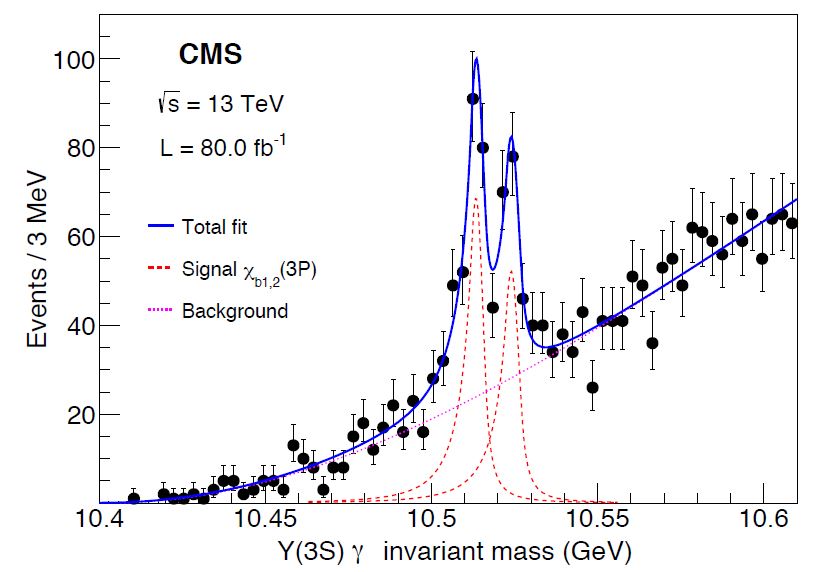 
But anyway, what are these two twin peaks and why should you care? Well, these are two resonances with mass very close to one another. As I mentioned in the introduction, we are discussing spectroscopy here. In the 1800s chemists and physicists identified different chemical substances by watching the colour of the flame when they burnt them, using prisms that separated the various "emission lines" and made them better measurable. They were looking at spectra of light.

Those folks thought they were studying the properties of elementary particles - atoms! Nowadays we know better (I hope you appreciate the subtle sarcasm) as we study much smaller entities, hadrons composed of quarks. But we do use a pretty similar technique: we still look at the emission of radiation from these particles to identify them. As a particle decays into other bodies, we can reconstruct the energy it possessed by measuring the energy and momenta of the decay products. When we finally put together a histogram like the one above, we are very well looking at a spectrum too. Not a colored one, but still a distribution of intensities along an axis describing different energies.

The CMS analysis is remarkable because for the first time it allowed the measurement of two very close resonances: these particles, called chi_b1(3P) and chi_b2(3P) have masses so similar to one another that distinguishing them is a complex business. They are hadrons composed of a bottom quark and its antiparticle, orbiting around one another with different units of total angular momentum. The different internal dynamics of the quarks within the hadrons give them very slightly different total mass.

The particles are identified by searching for their decay to a Upsilon(3S) particle and a photon. The Upsilon(3S), itself a bottom-antibottom bound state, then decays to a pair of muons, and the low-energy photon is detected through its conversion to an electron-positron pair. The fully reconstructed four-body final state can be measured with high precision thanks to the silicon tracker of CMS and the strong 4-Tesla magnetic field of the detector, so the mass of the original chi_b bodies is determined with great precision - which enables the two resonances to be distinguished, and their individual masses to be measured very well.

Why is it important? Well, there are some interesting questions on the possibility that quarks bind together in ways we used to not think possible. For instance, the study of particles composed by the other heavy quark, the charm (which weighs 1.2 GeV, as compared to the bottom 4.2 GeV), has made it clear that there are binding combinations of quarks in quadruplets, not just tripleds (what we call baryons, like the proton and the neutron) and pairs (what we call mesons). But are these really four-quark states, or rather loosely-bound molecules made of two 2-quark mesons? Precision mass measurements of these states become crucial to discern the various possibilities.

If you are a visionary, you could even conceive that one day we might be able to exploit the binding energy of these "molecules" in a fashion similar to that of nucleons. The involved energies are orders of magnitude higher, so this would seem intriguing... As my friend Marek Karliner explained in a recent seminar he gave in Padova, however, this possibility although intriguing is too far fetched to be discussed.

Anyway, I find that this recent new measurement by CMS is quite cool: for the first time we measure with precision these hadron states. The mass measurement can be spelt out in full below:

As you see, these particle masses are determined within a few parts in 100,000. Way to go, CMS!