Tommaso Dorigo
I am very happy to report today that the CMS experiment just confirmed to be an excellent spectrometer - as good as they get, I would say - by discovering two new excited B hadrons. The field of heavy meson spectroscopy proves once again to be rich with new gems ready to be unearthed, as we collect more data and dig deeper. For such discoveries to be made, collecting as many proton-proton collisions as possible is in fact the decisive factor, along with following up good ideas and preserving our will to not leave any stone unturned.

But let me stop geological analogies and explain very briefly what CMS found, and why it is the stuff that at the end of the day justifies the effort of building high-luminosity colliders and ultra-performant detectors. That quarks bind themselves into quark-antiquark pairs (so-called mesons) and quark triplets (called baryons) is a fact established already in the sixties of the past century by Murray Gell-Mann and George Zweig. The new particles are excitations of the so-called "B sub c" meson, a state made by a bottom and a charm quark orbiting one another. They were predicted to exist as bound states, although a precise prediction of their mass was not easy to make.

So what is the excitement?

Well, the fact is that we are charting new territory (oops, again geology) with these discoveries. LHCb, CMS and ATLAS found dozens of new particles, whose precisely measured masses allow us to understand more in detail the inner workings of the strong interaction (QCD, for quantum chromodynamics), the force that among other things holds protons, neutrons, and atomic nuclei together. We have figured out how QCD works a long time ago, but we still cannot compute it in the range of energy relevant to pinpoint what the mass of hadrons should be. In the end, our effort of classifying all the new strong-interaction bound states we find, and measure their properties with precision, is bound to pay us back with a better understanding of the theory, and who knows, maybe one day that understanding will also produce practical applications that governments can put taxes on!

As a telling example, my friend Marek Karliner has shown that the binding energy of molecular states made up by some of these particles can be orders of magnitude larger than that of nucleons - and let me remind you that the latter is used in nuclear power plants as well as, unfortunately, nuclear bombs. This incredibly large energy stored in such ephemeral bodies as hadronic resonances is something that probably cannot be exploited by new technology even in our wildest dreams, and yet it is certainly an awesome fact to contemplate in its own right... No, I am not writing this in the hope that some trigger-happy US congressman starts fantasizing about regaining a military hegemony by constructing new weapons using molecular hadronic states, thus directing heaps of money into research in fundamental physics just like what happened 70 years ago. I am just hinting at the fact that pure research is exciting because we don't know what we may discover with it.

Back to today's discovery: CMS measured the mass of those two until now never seen hadrons made up by an anti-bottom and a charm quark. These are two heavy objects that do not make up ordinary matter; they can only be created in energetic collisions, when the kinetic energy of the colliding bodies is converted into mass of new matter states according to Einstein's well-known formula, E=mc^2. Particle made up by a anti-bottom and a charm quark, called B_c, have been seen before, but what was found is that there exist two "excitations" of those, with different mass and spin. It is precisely the knowledge of the higher mass of these excitations that is interesting, as theoretical models struggle to predict that number.

The measurement employed the full 140 inverse femtobarns of proton-proton collisions acquired until now at 13 TeV, as these things are quite rare! In fact, only a handful of them are visible in the graph below. To give you a sense of scale, 140 inverse femtobarns of collisions correspond to roughly fourteen million billion proton-proton collisions. Among those, CMS detected two twin signals containing about 60 events each! 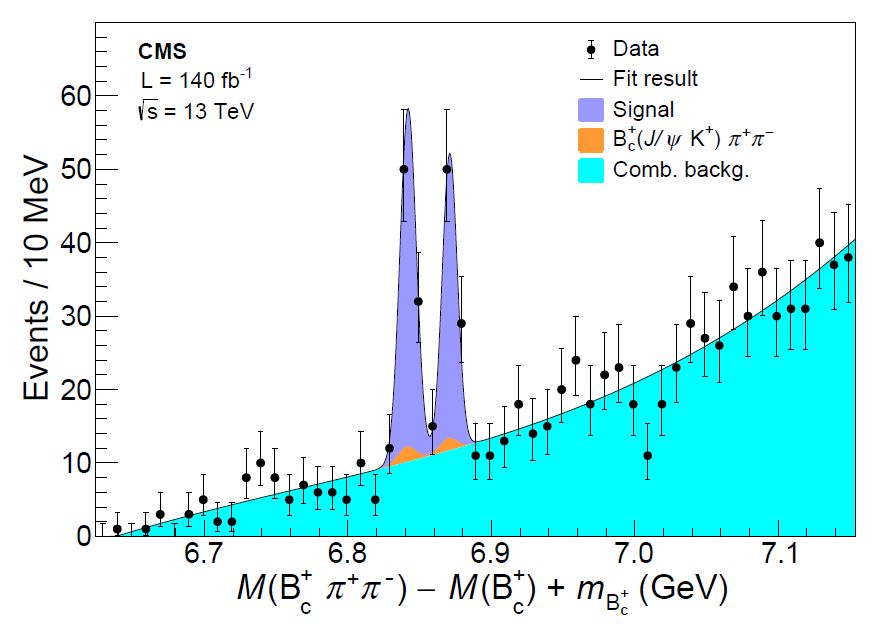 [Above, the data (black points with vertical uncertainty bars) are shown in a graph of the computed mass of the new resonance decay candidates. Rather than directly using the combined mass of the five charged particles produced in the decay, M(B_c ππ), which includes two muons and three pions, CMS subtracts off from that number the computed mass of the B_c candidate found from the J/psi plus pion combination, M(B_c), and adds back the nominal value of the same quantity, m_B_c. This trick allows to reduce the experimental uncertainty in the mass of the new found resonances.]

The two peaks colored in purple, which well interpret the observed data, are made by the piling up at their respectively measured masses of two distinct particles - two states of distinct quantum numbers. The CMS analysis reconstructed the decay of the particles by identifying two charged pions produced together with a ground-state B_c meson, which later decayed into other distinguishable particle signals (ok, if you want the detail, the decay produces a J/psi meson and a further charged pion; the J/psi then decays into a muon pair, the two particles that eventually allow the events to be collected by the online trigger system).

The reconstruction into a "fully exclusive final state" (meaning that all the products of the decay were measured, and are always the same) allows a very precise determination of the mass of the two excitations, and an even more precise determination of their mass difference. These numbers will be invaluable inputs, together with several others, in the understanding of the inner workings of non-perturbative QCD dynamics.

Now, the above is hard science, of the most exquisite kind if you ask me. The fact that it is costly to build the accelerators that produce it should not deter us, should it? Or do you really mean to argue that it is not interesting to amass new knowledge on the inner workings of Nature, regardless of how close a practical application of what we find may turn out to be?

For more information, please see the CMS preprint on the matter here.