Tommaso Dorigo
The CMS Collaboration has just released the results of a deep study of their sample of lead-lead collisions, produced at a center-of-mass energy of 2.76 TeV per nucleon by the Large Hadron Collider.

Why lead-lead collisions instead of the "normal" collisions of protons against protons ? The energetic collision of heavy nuclei may produce a hot plasma of quarks and gluons, an extreme state of matter whose physics is targeted by the ALICE detector at the LHC, while ATLAS and CMS are designed for the "simpler" physics of proton-proton interactions. But the latter are omni-purpose detectors, and they have shown to provide tough competition to ALICE on the physics of the quark-gluon plasma. Indeed, both ATLAS and CMS have already published very important studies of that extreme state of matter.

The CMS analysis I am discussing today focuses on the rate of production in nucleus-nucleus collisions of two particular heavy mesons, the J/Psi and the Upsilon(1S). These particles are respectively composed of a pair of charm-anticharm quarks and a pair of bottom-antibottom quarks. They are very famous particles, too. The J/Psi was discovered in 1974 by Burton Richter and collaborators at SLAC, and by Sam Ting and collaborators at Brookhaven, and its observation convinced everybody of the reality of quarks; five Nobel prizes were awarded to experimentalists and theorists for its discovery. The Upsilon(1S) was instead discovered by Lederman and collaborators in 1977 at Fermilab, and it also fruited a Nobel prize. 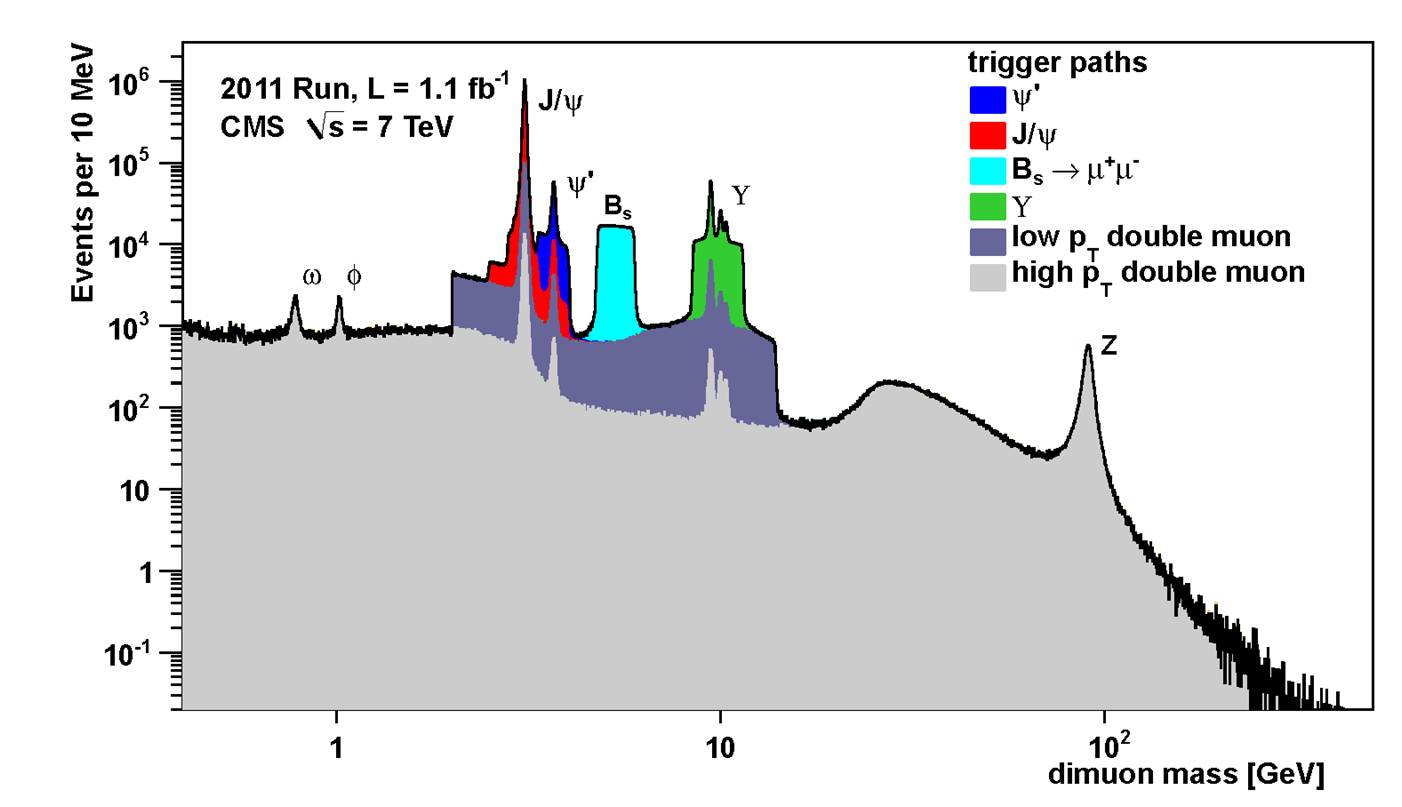 (Above, you can see the reconstructed invariant mass of muon pairs observed by the CMS experiment. One recognizes several resonant states as "peaks" in this distribution: from left to right the omega, the phi, the J/Psi and Psi(2S), the three Upsilon states, and then the Z boson [the different coloured areas refer to different cuts applied to the muons by the online selection algorithms]. A wonderful picture encompassing forty years of discoveries!)

Nobel prizes, however, have little to do with the reason why the J/Psi and the Upsilon(1S) are sought in the collision of heavy nuclei. Rather, the fact is that these heavy mesons chance to decay a significant fraction of the time into muon pairs, and muon pairs can escape the hot plasma of quarks and gluons without being "absorbed" by it. One may thus reconstruct the signal of the heavy mesons from the dimuon kinematics, study the rate of production of the mesons, and relate this rate with the thermodynamic features of the collision, comparing it with the one that would be expected in the absence of plasma formation.

What happens may be pictured as follows. A charm-anticharm quark pair is created in a energetic collision somewhere within the volume where the two nuclei cross one another. This pair would normally bind into a J/Psi meson, but within the hot environment, full of coloured objects, the QCD potential which would normally create the pair is altered, making the binding less likely. One thus observes fewer such bound states than would be expected in the absence of a plasma. So one speaks of "suppression of J/Psi" or Upsilon production.

I have an objection to this qualitative picture I myself drew (but which is based on the normal interpretation of the named phenomenon). So I need to turn the diatriba mode on.

"But" - you might argue "the rate of decay of these mesons to muon pairs is very, very well measured in other experiments!". True, but all these measurements are made in less QCD-dense environments: who are we to dictate that the muon branching ratio is a constant of nature, valid in every possible context ? So let me argue that the plasma might be either suppressing the production of these bodies, or enhancing the decay of the mesons into hadrons, effectively depleting the fraction of dimuon decays we count in our detector. Or maybe both mechanisms coexist.

The reasoning is as follows: a bound state of charm-anticharm usually has a hard time decaying into hadrons, because it must emit no less than three gluons to do so: it cannot turn into a single gluon (by the annihilation of the pair) because the gluon is coloured while the original meson is colourless; and it cannot annihilate into a pair of gluons because of the charge-conjugation invariance property of QCD interactions (the meson and the gluon pair have opposite charge-conjugation quantum number). But three gluons are hard to produce, because the process is then proportional to the sixth power of the strong coupling constant (a number whose value is of the order of a few tenths in the case we are considering).

As a result, the ordinarily rare electromagnetic annihilation of the charm-anticharm pair into a photon gets favoured, and snatches a sizable slice of the total pie of decay rates. This, at least, is what we know is happening for J/Psi and Upsilon(1S) mesons created in proton-proton collisions.

Now, in a dense plasma of quarks and gluons, where the colour field potential must be really messy, a charm-anticharm pair might be able to exchange quantum numbers with the medium, effectively freeing itself of the need of producing at least three gluons. The resulting probability of decay to hadrons would increase, and the electroweak decay to muon pairs would be consequently suppressed.

Whether one thing is happening or the other is not clear to me -mainly because I need to study more the physics of quark-gluon plasma. So if your knowledge of the matter is better than mine, please feel free to teach me one thing or two by commenting in the thread below. I would be happy to be explained why everybody speaks of "suppression of J/Psi production" and not of "suppression of J/Psi production and decay". At least in principle, the latter appears more precise to me. 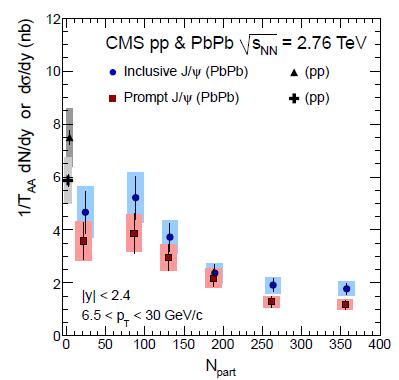 Ok - diatriba mode off. The figure on the right is one of the main results described in the new CMS paper. It shows the rate of J/Psi production (inclusive, in blue, and "prompt", or not due to B meson decays, in red) as a function of the effective number of nucleons participating in the collision, Npart: the more the two lead nuclei hit each other "head on", the larger this number; the more peripheral is their interaction, the more the physics must resemble that of proton-proton collisions (grey measurements shown at the extreme left).

Indeed what is observed is that J/Psi decays to muon pairs are suppressed with respect to the reference rate -derived from 2.76 TeV proton-proton collisions. It is exciting to know that from a theoretical point of view it is still hard to produce a model describing the observed phenomena in a quantitative way. Or at least this is what I gather from the little reading I made of the topic.

Together with the result I just summarized, CMS and ATLAS have observed many other features of these incredibly interesting nucleus-nucleus collisions. And the results they produced are based so far only on a very small statistics collected at the end of 2010. A few months ago, however, the LHC produced twenty times more data for the experiments to analyze. In a few months, we may thus expect a new wave of interesting results in the physics of ultra-dense, ultra-hot environments. Something else to watch, besides the final hunt for the Higgs boson!
A Quantum Diaries Survivor
More Articles All Articles
About