Tommaso Dorigo
As the regulars here already know, I am an employee of the INFN. This is the "Istituto Nazionale di Fisica Nucleare", which translates as "National institute for nuclear physics", a slight misnomer of historical origin, as the institute today actually centers its activities on SUB-nuclear physics - i.e. study of elementary particles (but nuclei are still one of the targets!).

The INFN has 20 sections around Italy, and four main laboratories. The "sections" coexist with physics departments of Universities. So, for instance, my office is in the Physics and Astronomy department of the University of Padova, although I work for INFN-Padova. This kind of symbiosis is fruitful as the research activities we are involved in are also of interest of the department of Physics.

The Physics and Astronomy department in Padova is a nice, yellow-coloured, three-story building located at short walking distance from the city center. My office, ever since I moved in from Harvard University 19 years ago, has always been the same, at the third floor and in a quiet wing of the building. However, the department is chronically lacking space for its employees, the students, the administrative, and the didactical and research activities, so rearrangements are not infrequent. And this year I was invited to move to another office.

The move is technically a bit annoying, as it involves packing and unpacking, sorting out stuff that deserves to be thrown away, cleaning up stuff that has been dirty for the past decade without anybody noticing, and directing the rearrangement of the target office; in addition, it is emotionally distressful as it sort of means "cutting ties" with a group of colleagues with whom I have not had a scientific collaboration in the recent past but with whom I had of course a habit of sharing the same spaces and breathing the same air. Yet they are not disappearing, nor am I, so this is a bit more a virtual than a factual issue.

On the other hand, the deal is a good one, for a few reasons. First of all, together with the planned move of two other colleagues, it "reunifies" the CMS-Padova group in a contiguous set of offices, which makes it easier to communicate and coordinate joint actions, discussions, meetings. And at the psychological level there is also a benefit. CMS-Padova includes two dozen members of the CMS experiment, among which there are researchers who were leading figures in the design, construction and commissioning, and operation of two different detector systems: the inner silicon tracker, and the muon drift chambers. With my (and that of a few other colleagues') move, these two different souls get closer together.

More on the practical side, the new office is very spacious, and the ceiling is 4 meters above the floor. I will share it with a long-time colleague, Prof. Roberto Rossin, who was a colleague also during my CDF years. Furthermore, being on the first floor, very close to the main building entrance, to the secretaries of the group-1 activities I lead, and to the seminar room, it offers a few non-trivial logistic advantages. For one thing, my commute time drops by 10%!

In fact, the walking time from home to the office at the third floor used to be 10 minutes. Now it is 9 minutes. Is it irrelevant? I don't think so. For consider. I plan to live long enough to work here for 15 more years, before I retire. During those 15 years I will walk to my office and back an estimated 3000 times. That means 6000 minutes saved of commute time, or 100 hours. Those 100 hours can be used for playing the piano, for instance learning one more of Chopin's Etudes (if I use the extra time at home), or for writing 5 more scientific articles (if I use the extra time at work)...

The picture below shows the situation as of yesterday evening - the furniture is still being mounted. I will post an updated one when the work is finished! 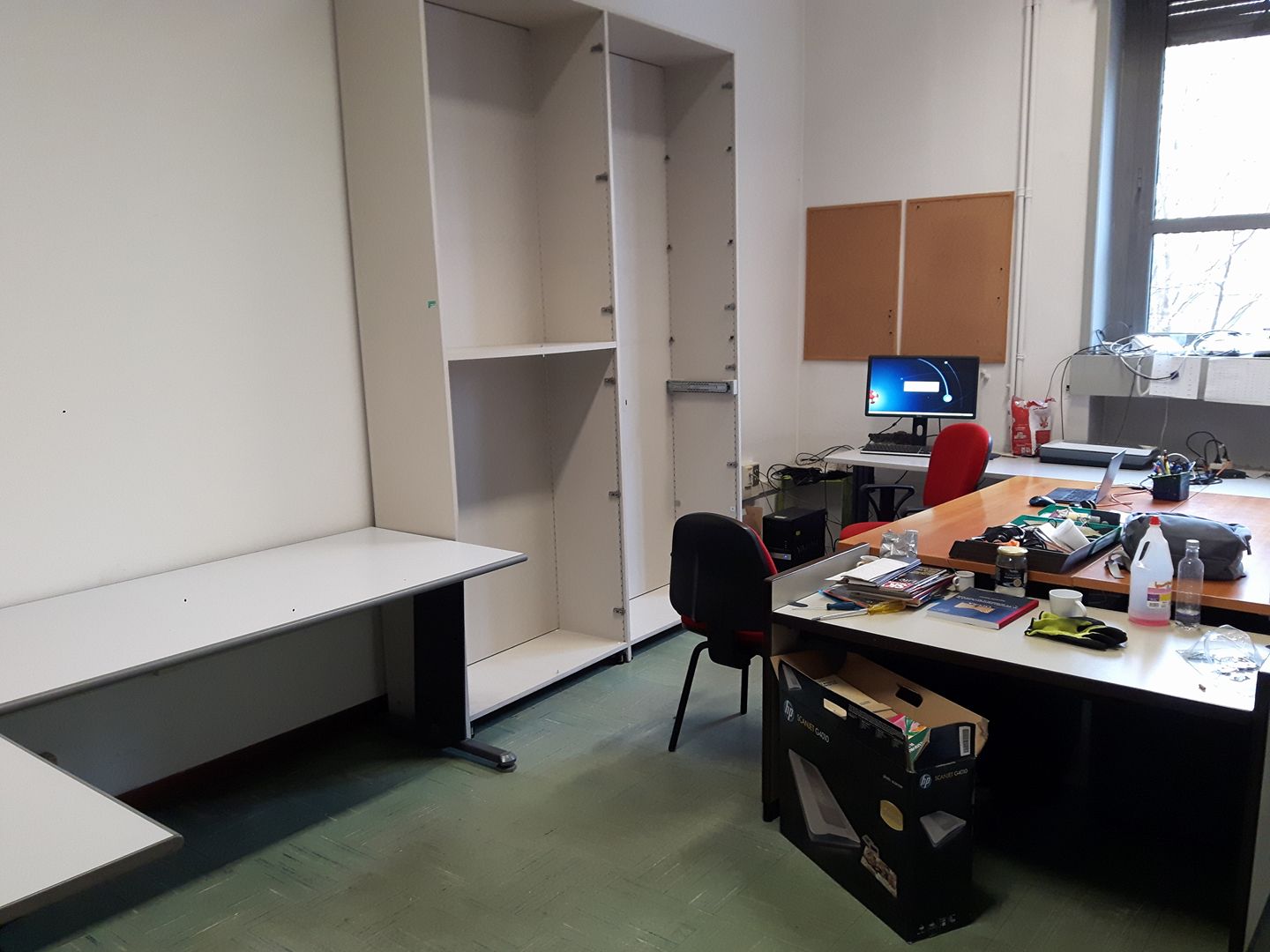