Tommaso Dorigo
While preparing for another evening of observation of Jupiter's atmosphere with my faithful 16" dobsonian scope, I found out that the satellite Io will disappear behind the Jovian shadow tonight. This is a quite common phenomenon and not a very spectacular one, but still quite interesting to look forward to during a visual observation - the moon takes some time to fully disappear, so it is fun to follow the event.
This however got me thinking. A fully eclipsed jovian moon should still be able to reflect back some light picked up from the still lit other satellites - so it should not, after all, appear completely dark. Can a calculation be made of the effect ? Of course - and it's not that difficult.

Let us consider a satellite A just disappeared in Jupiter's shadow, which is not too far from another satellite B still in the sunlight. For simplicity let us consider a geometrical situation such as the one depicted in the scheme below. 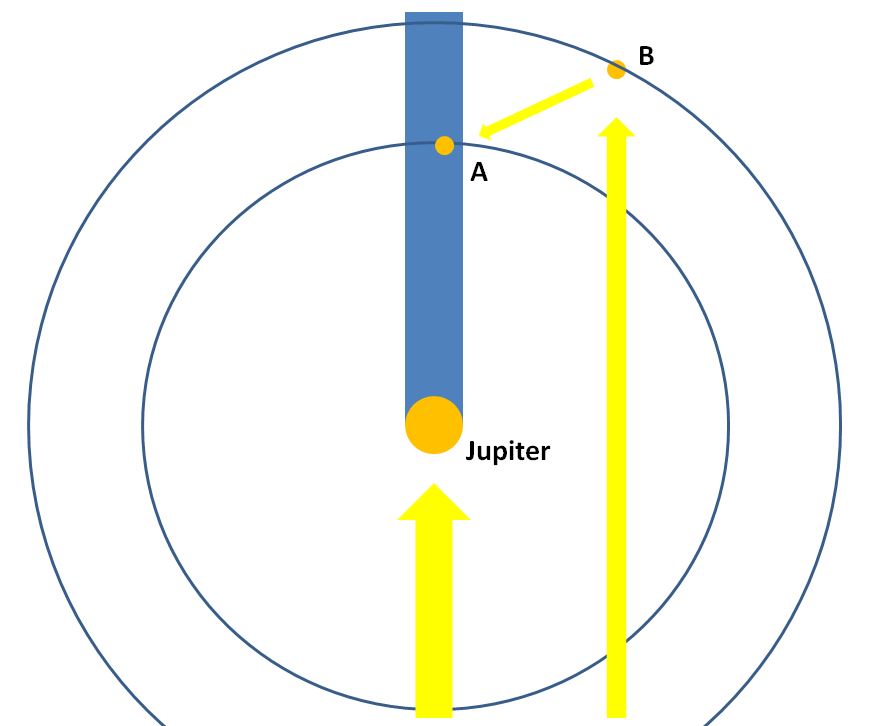 If satellite B has a visual magnitude, as seen from Earth, of 6.0, say (I did not bother looking up the actual number, since I know I am quite close), then the visual magnitude of B as seen from satellite A (instead than from Earth) must be larger by the ratio of squared distances R =D(A,B)^2 / D(B,Earth)^2. We need also to account for a factor of 2 since as seen from A, B will be only illuminated in its right half.

Since the distance of the two satellites can be as small as 400,000 km (say, for Io and Europa in the considered configuration), the distance from Earth at opposition is then of the order of a thousand times larger. 1000 squared is one million, and we need to divide by two as mentioned above. Hence we get that B can be 500,000 times brighter as seen from Io than it is from Earth. In magnitude units that is 14 magnitudes brighter (as a factor of 100 is 5 magnitudes difference - it's a logarithmic scale). This means to subtract 14 from 6, which results in -8. So Europa, half-lit by the Sun, can be a bright -8 magnitude object in Io's sight.

Now what does that mean ? Well, to make a simple calculation, remember that the Sun is a -26.5 magnitude object as seen from Earth. Jupiter, however, is 5 times as far from the Sun, so the Sun from it must be a 25 times less bright object - that's a bit less than 4 magnitudes less bright, say -22 to cut it short. So if you're sitting in your backyard on Io, the Sun will appear 14 magnitudes brighter than Europa to you!

Given the above, if the Sun's illumination of Io results in the satellite to have a brightness of +6 as seen from Earth, then the residual brightness from Europa's illumination must be 14 magnitudes smaller than that - make that 15, as in the configuration depicted above we only see half of Io illuminated by Europa, while the other half is dark. So this means that, in the particular situation we have considered, Io must have a brightness of +21 as seen from Earth, even when fully eclipsed by Jupiter.

Now, a magnitude of +21 is way beyond the limit of observability with the instrument I have; and besides, the very bright planet in the same field of view makes it totally impossible to see the residual brightness of the satellite in these conditions. But... What about a major telescope ?

It turns out that the Subaru telescope in 2012-2014 studied the residual brightness of the Jovian satellites, as I found out with a quick internet search. They did it to see if they could detect the effect of the brightness of the cosmos on the satellites's surface. Much to their disappointment, they made a serendipitous discovery instead - the satellites are quite brighter than expected, even under eclipse. The researchers considered the effect as due to the light scattered by high atmoshperic clouds of Jupiter, similarly to the effect that makes our moon red when eclipsed fully by our own shadow. 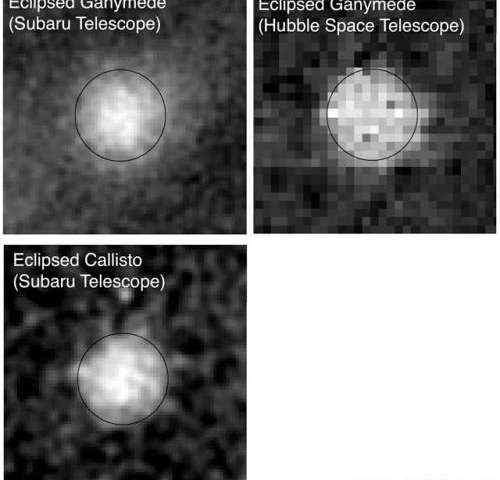 The Subaru scientists saw the residual light of the satellites to be about one millionth of their original brightness. This is in the same ballpark of brightness as the one I computed above, as one millionth corresponds to a drop of 15 magnitudes - but I considered a very rare occurrence of one satellite being very close to the other when it gets eclipsed; also, note that if the eclipsed satellite is Ganymede, which has a much larger orbiting distance from Jupiter, then the distance from all other satellites is much larger.

A factor of 10 distance from the brightest nearby satellite still casting a significant reflected light on Ganymede easily accounts for a difference of 4 magnitudes between my estimate and the one reported by Subaru. So, to conclude: reflected sunlight from other satellites can fully account, in some special configurations, for the brightnesses observed by Subaru; or be much smaller or negligible in ot situations.
Hence I would like to know more about the detailed configuration of the satellites corresponding to the moments when Subaru obtained the magnitude estimates - did they consider the brightening of the satellites' surface due to reflected sunlight from other satellites still in view of the Sun ? I hope they did, but all what remains to note is that, as Feynman once famously said, *ANYTHING* is interesting if you study it deeply enough. Asking more and more detailed questions about a system will increase your understanding!