Tommaso Dorigo
Last night I was absolutely mesmerized by observing the transit of Ganymede and Io, two of Jupiter's largest four moons, on Jupiter's disk. Along with them, their respective ink-black shadows slowly crossed the illuminated disk of the gas giant. The show lasted a few hours, and by observing it through a telescope I could see a three-dimensional view of the bodies, and appreciate the dynamics of that miniature planetary system.


In this post I wish to explain to you, dear reader, just why the whole thing is so fascinating and fantabulous to see, in the hope that, should you have a chance to observe it yourself, you grab the occasion without considering the lack of sleep it entails. I am sure you will thank me later.

The physical system and its apparent dynamics

Jupiter is the largest planet in our solar system. Its atmosphere continuously changes in appearance, but it retains some latent features that have over time characterized its appearance - most of all, two dark bands near its equator, and a huge "red spot", a latent vortex of reddish colour which has been there for over a century. Observing Jupiter's surface with a decent telescope in a good-seeing night is quite an experience by itself, as not only do you get to observe a complex structure of vortices and storms, of hues varying from yellow to red to greenish gray. The planet, although ten times the size of our Earth, performs a full rotation around its axis in just a bit more than eight hours: hence during an observing session of two to three hours you get to appreciate the movement of the features on the planetary disk quite clearly. You clearly appreciate the dynamics of the system in front of you, although you are looking at a huge body!

But Jupiter is also endowed with two dozen satellites, big and small. The largest four are way larger than all others, and are called "Galileian moons", as they were discovered by Galileo Galilei in 1610. It is, in fact, the observation of the planetary motion of those four moons around the planet's disk what started to shake the Earth-centric paradigm of celestial mechanics, opening the door to the acceptation of the Copernican worldview (earlier understood by Aristarchus of Samos, 18 centuries before), which placed the Sun at the center of the solar system.

The four moons Io, Europa, Ganymede and Callisto are sized roughly like our Moon, or a bit more - they range in diameter from 3100 to 5300 kilometers (the moon has a diameter of 3500). Due to their 1500 to 2500 times larger distance from us (the variation is due the Earth-Jupiter relative configuration in the solar system), as seen from Earth they appear little more than dots in amateur telescopes. Their apparent luminosity is close to the limit of our eye detection capability, and their closeness to the much brighter parent planet makes them only visible with optical instruments (a small binocular will suffice), save for exceptional circumstances. 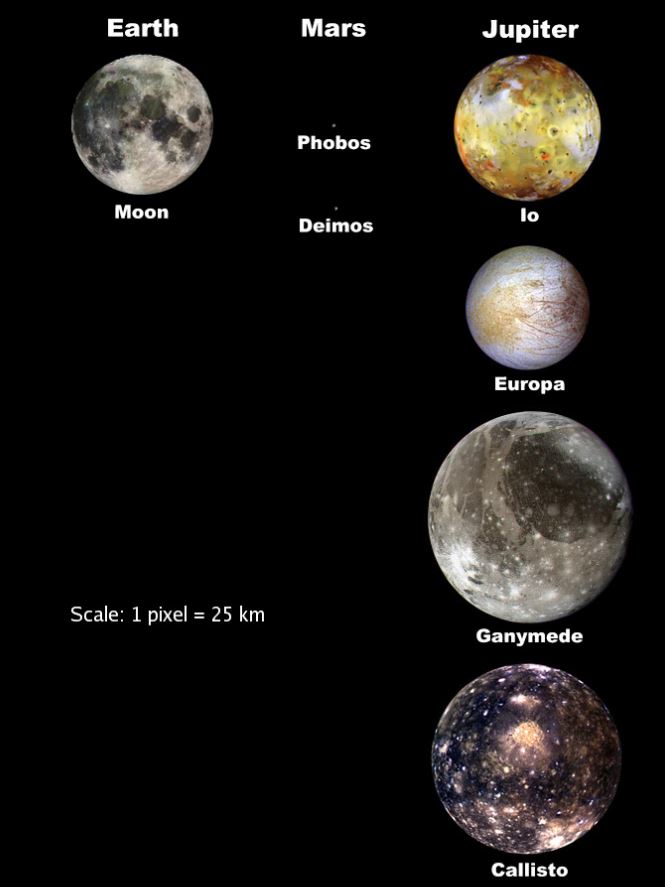 (Above, the size of the four largest jovian moons compared to the Moon and to Mars satellites. Credit: Wikipedia).

As seen in a telescope the four main Jovian moons put up quite a show, as they quickly rotate around the planet, and their motion is easily detectable. For example, the revolution period of Io, the closest moon to Jupiter, is of 1.7 Earth days. Given that the semimajor orbital radius of Io is of 422000 km, the satellite moves at 17.34 km/s around Jupiter. As seen from Earth under ideal conditions (i.e. during an opposition, when Earth and Jupiter are aligned on the same side of the Sun), the distance from us is of 600 million kilometers, so that means an apparent motion of up to 20 arcseconds per hour. That is almost half the apparent Jovian diameter. In a largish amateur scope such as mine (a 16-inch Dobsonian), you appreciate the displacement by looking at the system in 5 minute intervals.

[Incidentally, Io is an incredibly interesting object - for one thing, it sports gigantic volcanos, whose eruptions can be imaged by the largest telescopes.]

The observation of the changing appearance of the small planetary system's configuration is by itself a mesmerizing experience. But there is a whole lot more to it! In fact, the four moons circle around the planet on the same plane of rotation of Jupiter and the Earth around the Sun. This causes the satellites to usually cross the planetary disk as seen from us. When they do, you get to appreciate even more clearly the three-dimensional nature of the system. This phenomenon is called "transit".

Also, when Jupiter and the Earth are not perfectly aligned, you can observe the disappearance of the moons as they enter the umbral cone cast by Jupiter behind its back. That phenomenon, called "eclipse", is like the total eclipse of our Moon, although here the small satellites entirely disappear (the residual back-scattered light from Jupiter is barely detectable with the largest instruments from Earth, as I discussed in a former article). Their disappearance is a matter of a few minutes, and observing the gradual dimming of the light of these small dots is one further proof of the dynamics of the system.

But there's even more. When the satellites transit the Jovian disk (or at times even if they pass slightly above or below it, due to the relative misalignment of Jupiter and Earth) they cast pitch-black round shadows on the gaseous surface. Observing those small black dots, preceded or trailed by the satellites themselves, is absolutely fantastic. These events are called "shadow transits".

There would be oh so much more to explain about the complex apparent dynamics of these moons - e.g., when moons occult one another, or cast shadows on each other. The possibilities are mindboggling. But for today the above should suffice.

What was observable last night was a double shadow transit, compounded with the actual satellites transit. The players were Ganymede and Io, the largest and third largest of Jupiter's moons. The expected configuration could be obtained by a very nifty application offered by the Sky and Telescope web site (I hope they keep it up!). You type in the date and time, and the app spews data for all satellite events on Jupiter, plus a graphical display of the system at the inputed time. For yesterday, this was the output:

I was lucky to have a chance to observe yesterday - first of all, the sky was clear and, although not very transparent (some thin layers of clouds reduced the visibility a bit), the seeing was good. "Seeing" is a quantitative estimate of the turbulence of the atmosphere, and it is by far the critical parameter in determining the observing conditions for high-resolution planetary imaging and visual observation. The transits were expected to start at 1.30AM, so I mounted the telescope at 10.30PM, to allow time for the telescope mirror to reach the temperature of the outside air (an important detail that prevents turbulence in front of the mirror surface, deteriorating the resolution).

The planet is close to opposition these days, meaning that it is located near the closest point to Earth. That is good, as closer means better views. But unfortunately for northern observers, it is currently in a southern constellation, so it never rises more than 30 degrees above the horizon for Italian observers (I am located in Padova, Italy). Low height above the horizon means worse seeing, as the turbulence is worse there; also, it means smaller transparence, as the light from the planet crosses a twice larger amount of atmospheric dust before reaching you.

I enjoyed the show from its start to about halfway - I called it a night at 4AM, mainly because the planet was disappearing behind a building as seen from my terrace. Toward the end of my observation I took a few pictures in a very rudimentary way: by placing my cellphone over the eyepiece, and randomly taking shots while trying to clumsily make the planet's disk fit in the camera view. I do not recommend this practice at all - cellphone cameras, for one thing, are entirely unsuited to the task; there is no way to control the overexposure of the planetary disk; and the unsteady setup prevents you from taking sharp images. But I wanted to document the event... Below is the result of my effort (in this image, south is up, unlike in the graph above and in Alexey's pic below). 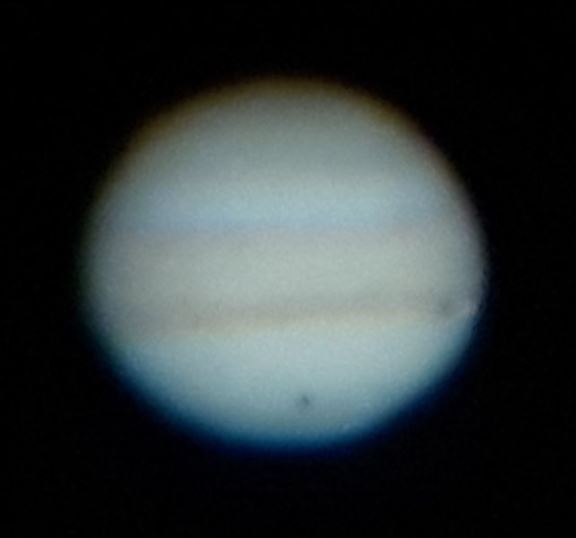 I must say I am actually pleased by the result, as it allows you to understand more or less what was visible from the eyepiece. The view was actually way better, for the reasons I mentioned above, and much sharper. But on the other hand, if I compare this picture with the best professional pictures of Jupiter I could see when I was a kid, in the seventies, this is on par with them!! That fact alone should tell you just what giant leaps has imaging made with the digital era and with semiconductor-based light detectors. It is not a stretch to say that amateur astronomers would have killed to obtain such a picture, 40 years ago!

A much better picture of the double shadow transit, taken with much better photographic techniques and by stacking images from video capture, has been sent to me by Alexey Pace, an amateur who does a very good job at imaging Jupiter. He says the seeing was not good at his location, but he could still pull off a picture which shows as much detail as I could see by eye on my scope last night. You can get more information by visiting Alexey's site here.

In Alexey's image it is evident that Io (on the left) and Ganymede (at the top) are at different apparent distances from their respective shadows: that is because Io is four times closer to the planet's disk. That gives additional "3D" flavour to the view.
In summary, I heartily wish you can get a chance to observe such an event with a decent scope, as it is truely a unforgettable experience. But of course, you might be more interested in watching a movie on TV rather than spending your nights out in the dark, standing in front of a telescope. Indeed, I am rather disappointed to observe that when you google for "jupiter" the first hits are all links to movie trailers! You have to scroll to page two to find the wikipedia link or some other useful information on the actual thing. Oh well... Not everybody is a geek, fortunately.