Tommaso Dorigo
Visual observation of the planets of our solar system has always been an appealing pastime for amateur astronomers, but the digital era has taken away a little bit of glamour to this activity. Until 30 years ago you could spot with your eye more detail than was at reach of normal photography even for large telescopes, so amateur astronomers could contribute to planetary science by producing detailed drawings of the surface of Jupiter, Saturn, Venus, and Mars.
Nowadays the combination of digital imaging and computer processing has made the art of drawing planet surfaces quite obsolete, so visual observers watch the planets for the sake of it. I sometimes invite friends to have a peek through the eyepiece of my 16 inch f/5 dobson telescope, and they are generally awed by the views, but none of them would conceive watching a planet for five hours in a row. Instead, that is exactly what I sometimes do, like last Friday.

Jupiter is my favourite target within the solar system. The amount of detail that can be observed on its surface, on a clear and good seeing night, simply amazing; and the complexity of the system, which has Jupiter at the center and four bright moons orbiting it, is really remarkable. First of all, the planet does one entire spin around its axis in less than 9 hours, which means that if you observe for more than 4 hours you get to see the entire surface of the planet. Second, the four moons Io, Europa, Ganymede and Callisto can put up quite a show, as they cross the planet's disk and cast their shadow on it, or get eclypsed by Jupiter's own shadow, or by the disk itself.

Furthermore, in special conditions (when the satellites' orbiting plane aligns with the Earth-Jupiter-Sun plane) the satellites can eclipse one another or cast their shadow onto one another. These "Phemu", mutual events, are quite spectacular but really rare.

In even more rare circumstances we assisted from Earth to the explosion of a comet on the surface of the planet. This e.g. happened with comet Shoemaker-Levy in the nineties, when several pieces of the comet, shattered by Jupiter's gravitational field, plunged in the giant planet's atmosphere and created black dots on the disk.

Anyway, the surface of Jupiter itself is incredibly complex. The most distinct feature, besides the dark horizontal bands that cross its mid latitudes, is the Great Red Spot, a giant red pimple that can be observed even with relatively small telescopes. The spot is actually a persistent storm in the planet's fluid surface. But myriads other storms, from white to orange, can be spotted with larger instruments.

Last Friday the conditions were too good to let go, and I kept watching the planet for over three hours. The great red spot culminated at the meridian of the planet (crossing the center, that is) during my observation. I decided I would try my hand at some imaging, using nothing more than a cellphone. Now, this is quite tricky, for a couple of reasons. First, the lens of the cellphone is small and it is positioned in a random place on its back, and the eyepiece projects a very narrow light beam - getting the two things to coincide spatially is quite tricky.  Second, the planet will almost invariably end up be overexposed, unless you play some tricks. Third, the planet moves around the eyepiece view, since dobson telescopes do not have any automatic  tracking system. This works still very well for visual observing, as even 400x magnification can be managed quite easily, but for pictures it is a different matter.

The last important thing to note is that we are watching the planet through a thick atmosphere, which has constantly varying density above us. This makes the image tremble and flicker, and the time when it is perfectly still are very rare. If you observe visually you get accustomed to it - you watch for ten minutes, and get to have just two or three wow moments when the image blows your socks off. During those lucky moments when the air column above your head is perfectly still and the flow is laminar, all the little details of the surface of the planet become crisp and evident, and all colours attach to the detail that originally owned them; otherwise, the image blurs, the colours disappear, and the image is not worth much.

Because of all the above, getting a nice image of the surface is quite tricky. Of course, skilled amateurs whose focus is photography have much better setups available to them: object tracking, professional cameras taking continuous footage, and computers to reconstruct the image by "stacking" the best images one on top of the other; derotation algorithms, filters, and what not. But to me, visual observing is where the fun is, so my pictures are just a spinoff.

Anyway, below is the best picture I could produce during those moments when I got tired of sticking my eye to the eyepiece. While nice, the image does not represent in any way the amount of detail that could be seen during the best moments by eye. It is just the "average" view one could get at any given moment. Still, it is comparable in detail to the best images that were produced by big observatories in the seventies, when one did not have CCD pixels to record them.
If you look closely you can see the great red spot about to set on the left; a set of smaller ovals near the south pole, and lots of detail on the banding. 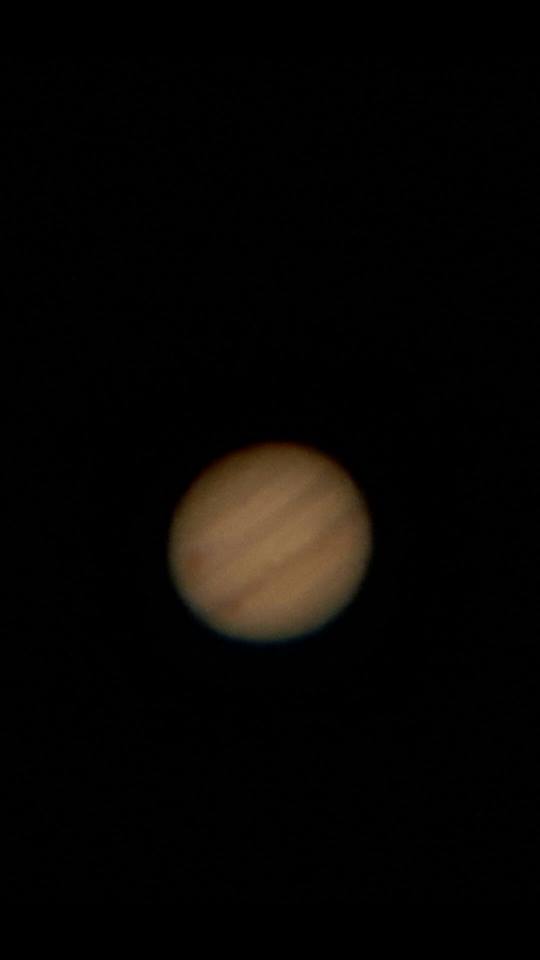