News Staff
Jupiter's moons are giving us a show not seen since 2013: The orbital path of the moons is tilting edge-ion to the Earth and the sun, making it possible to watch the moons pass in front of each other, an occultation, or pass through another moon's shadow, an eclipse, and even cast tiny black shadows onto Jupiter.

Jupiter's Great Red Spot will be more difficult because it has shrunk to less than half the size of historical observations. It was 25,500 miles in diameter in the late 1800's. The Voyager spacecraft measured it to be 14,500 miles across in 1979. And recent Hubble telescope observations have found it to be 10,250 miles across. It's shrinking by 580 miles per year.

On the night of January 23 and the morning of the 24th, three moons and their shadows cross the disk of Jupiter. If you want to try to see their shadows, you'll want to start looking through telescopes at 10 p.m. Eastern time. At 10:11 p.m. the first shadow - of Callisto - appears, followed by Io's shadow at 11:35 and Europa's at 1:27 a.m. Then for 25 minutes, until 1:52 a.m., the three black shadows will appear on the planet's disk at the same time. This triple shadow transit won't happen again until 2032.

There's one more treat in store for Jupiter observers this same morning. Io is eclipsed by Calisto's shadow, beginning at 12:41 a.m. Eagle-eyed observers will see Io dim in brightness about 10 minutes later, then resume its brightness in another 10 minutes.

To get you excited to bring out the ol' telescope, here is picture from 2013: 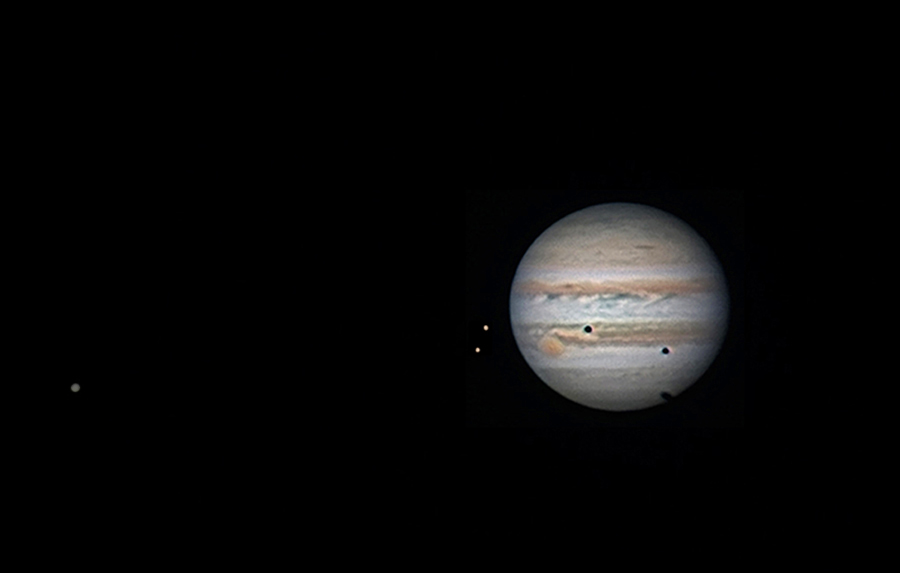 This webcam and telescope image of banded gas giant Jupiter shows the transit of three shadows cast by Jupiter's moons in progress, captured in Belgian skies on October 12 at 0528 UT. Such a three shadow transit is a relatively rare event, even for a large planet with many moons. Visible in the frame are the three Galilean moons responsible, Callisto at the far left edge, Io closest to Jupiter's disk, and Europa below and just left of Io. Of their shadows on the sunlit Jovian cloud tops, Callisto casts the most elongated one near the planet's south polar region at the bottom. Io's shadow is above and right of Jupiter's Great Red Spot. Of course viewed from Jupiter's perspective, these shadow crossings could be seen as solar eclipses, analogous to the Moon's shadow crossing the sunlit face of planet Earth. Image Credit&Copyright: Leo Aerts
News Articles
More Articles All Articles
About