There are four Galilean satellites - named after the 17th century astronomer Galileo Galilei who discovered them among the  first observations ever made with a telescope. They complete orbits around Jupiter ranging from two to seventeen days in duration and can commonly be seen transiting the face of Jupiter and casting shadows onto its layers of cloud. Seeing three of them transiting the face of Jupiter at the same time is less common, occurring only once or twice a decade in most cases. It last happened in 2013. 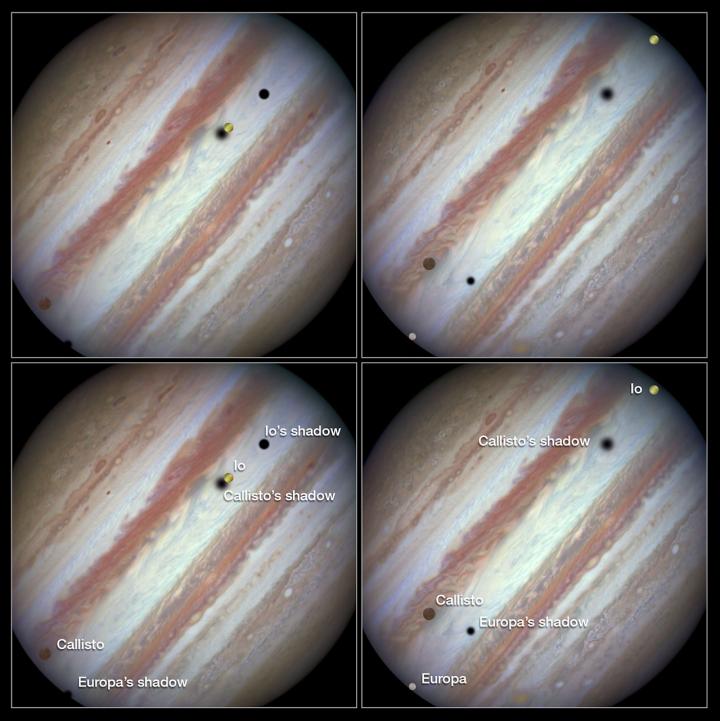 The image on the left shows the Hubble observation at the beginning of the event. On the left is the moon Callisto and on the right, Io. The shadows from Callisto, Io and Europa are strung out from left to right. Europa itself cannot be seen in the image.

The image on the right shows the end of the event, just over 40 minutes later. Europa has entered the frame at lower left with slower-moving Callisto above and to the right of it. Meanwhile Io -- which orbits significantly closer to Jupiter and so moves much more quickly -- is approaching the eastern limb of the planet. Whilst Callisto's shadow seems hardly to have moved, Io's has set over the planet's eastern edge and Europa's has risen further in the west. The event is also shown from start to finish in a video.

Missing from this sequence is the Galilean moon Ganymede which was outside Hubble's field of view.

The moons of Jupiter have very distinctive colours. The smooth icy surface of Europa is yellow-white, the volcanic sulphur surface of Io is orange and the surface of Callisto, which is one of the oldest and most cratered surfaces known in the Solar System, is a brownish colour.

The images were taken with Hubble's Wide Field Camera 3 in visible light on 23 January 2015. Whilst Hubble captures these moons in great clarity they can also be seen with a small telescope or even a decent pair of binoculars.
News Articles
More Articles All Articles
About