Tommaso Dorigo
The ATLAS and CMS collaborations released yesterday a joint document where they discuss the combination of their measurements of the rate of production of single top quarks in proton-proton collisions delivered by the LHC collider. The exercise is not an idle one, as the physics behind the production processes is interesting, and its study as well as the precise comparison of experimental results and theory predictions improves our ability to predict other reactions, wherein we might find deviations from the currently accepted theory, the Standard Model.

For those who have not been introduced before to it, the top quark is the heaviest of the elementary building blocks of matter in our universe. In fact, it is the heaviest elementary particle we know, even accounting for interaction carriers. The Standard Model organizes matter particles and interaction carriers in a scheme - a sort of Mendeleev table of subatomic entities - that foresees 6 quarks, 6 leptons, and a total of 12 bosons, plus the Higgs boson. The scheme is shown below. 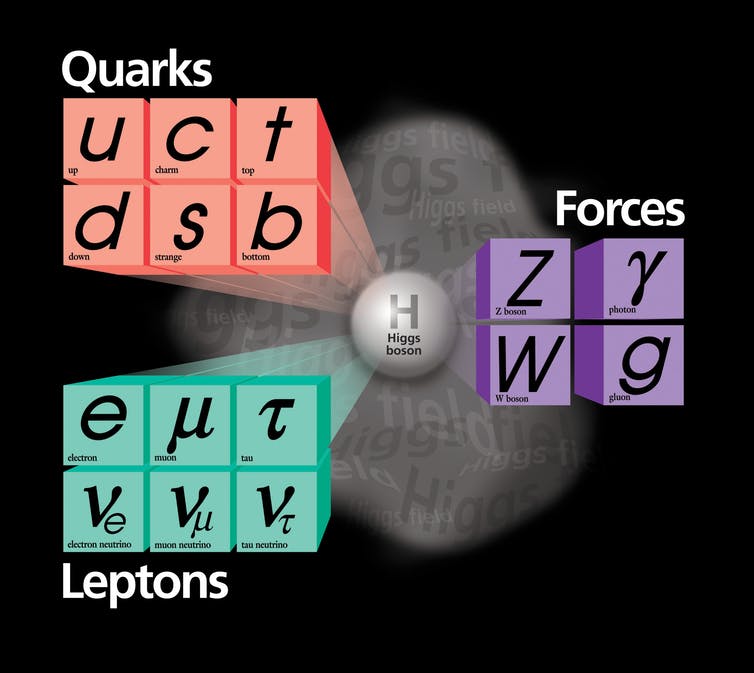 In the above picture you can see the six quarks in the upper left. Quarks are the particles that, properly combined in triplets, form protons and neutrons, the constituents of atomic nuclei. To combine in protons and neutrons quarks need to bind together tightly, and this is provided by the exchange of eight gluons, the particles labeled with a "g". This binding occurs thanks to the fact that quarks carry a "colour charge", and they are forced to stick together because this charge can only reside inside the formed structures, which are "colour neutral".

The top quark exists inside protons and neutrons only as a virtual particle, for mindbogglingly short instants of time. It is to rare to find it there, that we have until now been unable to put it in evidence as a proton constituents. Yet we know it is there, as the theory allows it, and whatever is not forbidden, in quantum physics, does occur.

So how do we study the top quark? By producing it in energetic collisions, whereby we trade off the kinetic energy of the colliding protons into the mass of new particles. This was first done in 1995 by the Tevatron collider, where CDF and DZERO discovered the production of top-antitop quark pairs, which materialize when the fusion of two very energetic gluons or the annihilation of a quark-antiquark pair does the trick.

Since 1995, we have studied top quark production in pairs in great details. In 2009 the production of a single top quark was also observed at the Tevatron. When the LHC collider was turned on, plenty of top quarks started to be produced and studied, and the relative importance of mechanisms of production involving single top quarks grew, along with the precision with which ATLAS and CMS could study them.

And how does a single top quark appear in a proton-proton collision? Barring the extraction of the phantomatic particle when it appears inside a proton, which as I pointed out above is still beyond our present possibilities, a top quark can be produced in three ways, all involving the intercession of a weak W boson. The W "couples" top and bottom quarks together, so if you start with a bottom quark carrying enough energy, you might observe it emit a W boson and transform into a top quark. The emitted W could then decay independently, or be absorbed by a quark from the other colliding protun. Alternatively, a very energetic W could produce a top-antibottom pair.

The three above mechanisms are shown in the Feynman diagrams below. A Feynman diagram shows the time evolution of the interaction between elementary particles. Time flows from left to right, and the vertical axis describes the spatial separation of the involved bodies. Lines in these graphs therefore describe the "trajectory" of particles as a function of time. They are labeled according to the particle they describe: "g" is a gluon; "q" is a generic light quark, "b" is a bottom quark, "t" is a top quark, and "W" is a weak W boson. When two lines touch each other, that represents an interaction between two bodies.

In the three cases shown above, which are called respectively (left to right) "t-channel", "tW", and "s-channel" in HEP lingo, the originators are quarks or gluons (as labelled on the left of each diagram). Yet the interactions are either all governed by the weak interaction (in the first and third diagram, where a W boson is involved in both vertices), or one by the strong and one by the weak interaction (the diagram in the middle, where a gluon interacts with a bottom quark).

Finding a signal of the above reactions is not very easy, as they are quite rare. But their rarity is also the reason why they are interesting: if there exist new particles or processes beyond the currently accepted theory, these must be rare and produce only faint modifications from the phenomena described by the Standard Model. By studying rare phenomena we give a chance to unknown new processes to contribute in an observable way.

So far, ATLAS and CMS have not seen anything discrepant from theoretical predictions. The comparison of theory and experiment is still a very important activity, though, as it provides more power for new tests of new physics in other phenomena. While ATLAS and CMS are competitors in a scientific sense, they have the common interest in perfecting those tests, so they decided to join forces and combine their results produced in the analysis of 7-TeV and 8-TeV collisions, to produce more accurate estimates.

The result of the combination of measurements is shown below, where for each of the three single top production processes are shown the ATLAS, the CMS, and the combined rate measurements. These are compared to theoretical predictions shown by the horizontal bands. 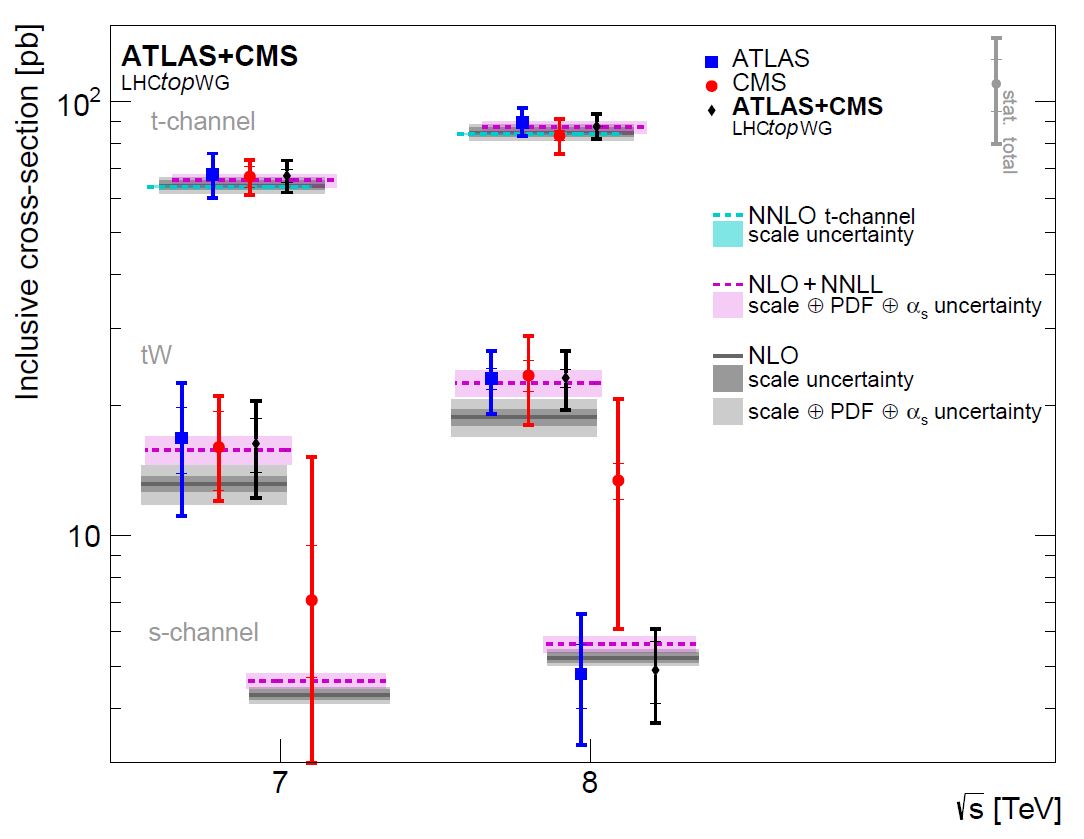 In the graph, the x axis represents the energy of the proton-proton collision, on which the production rate depends (not very strongly however). On the y axis is shown the "inclusive cross section", a measurement of the probability to produce single tops by the labeleed mechanisms. The data (points with vertical bars) are compared to different theory estimates, that use different technologies to estimate the effect of subtle "subleading" quantum effects, so called "next-to-next-to-leading-order" corrections.

All in all, things look good: all combined measurements agree with theory (in the case of the lowest-rate process of s-channel top production, a measurement in 7 TeV collisions data was only produced by CMS so there is no combination involved, and that estimate stands on its own). And what about 13 TeV results ? Those are still being worked at, using the large amounts of data collected until last autumn.


In addition of the important check of the Standard Model that the above measurements provide, they also allow the extraction of one parameter which governs the relative strength of the coupling between a top and a bottom quark. But I fear I have used already too much of your patience for today, so I will leave it to those really interested in the matter to dig out that information in the article I linked at the top.