Tommaso Dorigo
Is there a fifth force of Nature, beyond the four we know about ? This question has been around ever since it was understood that
1 - electric charges attract and repel, and influence one another, due to the action of the electromagnetic force;


2 - hadronic matter is held together by the strong force;


3 - quarks transmute into other quarks due to the action of the weak force (and leptons do that too);


4 - bodies carrying mass feel attracted to one another, although very weakly, by the gravitational force.

After electric and magnetic forces were understood in the nineteenth century to be due to the same fundamental interaction (later seen to be describable by the exchange of the same quantum, the photon), physicists struggled in the XXth century to unify the electromagnetic and weak force into a "electroweak field", whose formulation is at the core of what we now call the Standard Model of electroweak interactions.

We also believe that at very high energy a further unification between electroweak and strong interactions can take place, although we have no clear idea of how that works. And we finally believe that a grand unification of all four interactions also takes place, at interaction energies far beyond our power to investigate. So, are there really four forces, or three, or two, or just one?

That riddle is waiting for an answer, but in the meantime physicists, who are keen to speculate and ask poignant "what if" questions, also imagine worlds where there exist additional forces, yet to be discovered. One such thing, in a sense, is the interaction that the Higgs boson provides with all other elementary particles endowed with mass; but the Higgs is a rather special boson: it has no spin, and so it stands out of this querelle in some way.

Physicists have been searching for evidence of new vector bosons at the high-energy frontier, trying to produce them in energetic collisions at particle accelerators. The principle is always the one provided by the iconic "E = mc^2" formula of Einstein: give me enough (kinetic) energy E, and I can give you matter of mass m; the transaction is regulated by an exchange rate of c^2, the speed of light squared.

But is high energy the right place to search for new interactions? In truth, if a new interaction were feeble enough, it could hide in the as of yet ill-understood phenomenology of nuclear interactions. That is what a group of physicists from Hungary, among others, have been trying to do in a research program that culminated in a claim they put forth in 2016. They observed nuclear transitions that emitted electrons and positrons suggestive of a new interaction, with a well-defined mass for its hypothetical new mediator: 17 MeV, a value very small for particle standards - 34 electron masses, only a fifty-thousandth of the mass of the weak interactions carrier, the W.

The 2016 claim made headlines for a while, but was not taken too seriously by the scientific community. The effect could be due to a new force field, but could also instead be due to some instrumental artifact. And since extraordinary claims require extraordinary evidence, the matter remained in an undefined state, pending new evidence or confirmations.

Last month, however, the same group produced a new result, from a search performed in much the same fashion. While their previous "evidence" for a new Z' boson of mass in the 17-MeV range was coming from observing electron-positron pairs emitted by the de-excitation of a nuclear excited state of Boron, in this case the same signature was sought and found in the decay of an excited state of Helium. The mass to which energy and angle of the excess electron-positron pairs correspond is again close to 17 MeV, and the group reports a "significance" of over 7 standard deviations for the observed effect.

A figure from the paper is attached below. In it, you see the enhancement (red points) from the background model (black points) that the authors consider for the electron-positron pairs. 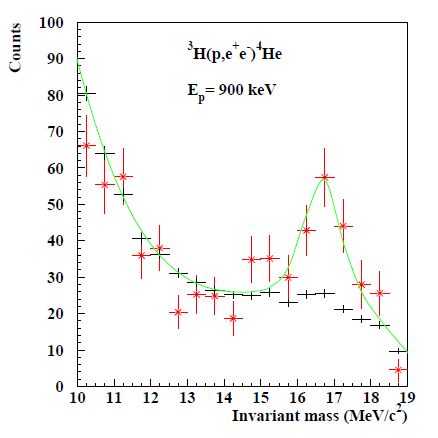 I must say I am not too excited by this find, but I will line up below both caveats and positive remarks about this observation, trying to be mild - in this blog I have often allowed myself a bit more criticism than would be considered polite, in similar situations. But age soothens one's soul.

1) In general, I am very happy that more studies are performed of low- and mid-energy nuclear physics, as I am about deeper investigations of "low-energy" QCD - in the latter case the energies involved are three orders of magnitude larger than in the former, but the aim is similar: there is a lot we still do not know about nuclei and hadrons, which we cannot learn about from the LHC. The more studies are performed in these areas, the happier I am.

2) Our claim that dark matter is a particle requires us to pay double attention to the above mentioned energy range - the SUSY neutralino had to be in the 100's of GeV range, but we did not find it, and now if I had to put my money somewhere, then, under the assumption there is a DM particle, I would bet it is lighter than a few GeV. Don't ask me why - I still don't believe there is one such thing to be found, because I am such a son of a sceptical bitch; but _if_ there is a DM particle I think it's laying in front of our noses rather than hidden at distance scales we haven't probed yet.

3) A light axion could be a perfect solution to many different riddles we face today.

And now, about the analysis and this 7-sigma evidence.

Forgive my frankness, but I believe that a lot about the accuracy of a result and the methodology of a study can be inferred from the way the article describing it is written. And in this case, it is sub-par for being in the class "articles that revolutionize physics". Not only is it riddled with grammar mistakes which a spell-checker would have easily caught - a sign of rushedness as well as one of carelessness. Also, I pity the way the authors described their statistical procedure. They cannot seem to be able to write a likelihood function, as their model for the data, which they call a "probability density function" is something like

"where N_signal and N_background are the number of fitted signal and background events, respectively". Good lord. Did anybody explain these folks that PDFs are normalized objects, and that their equation makes no sense whatsoever ? Did they ever wonder, at coffee time or under the shower, that the number of fitted events is not the true value they want to estimate ?

Look, I know I sound picky. I imagine what could be going on in your head right now: "ah, here is the broom-in-the-ass professor who lectures from above, unwilling to look beyond his glasses - it is obvious that they meant to say that the PDF(e+e-) would be renormalized to unity, etc. etc.". I am sorry, but as professoral I may seem, I strongly believe that he who speaks (or writes) badly thinks badly. And years of practice in data analysis (and in observing other people's data analysis practices) has convinced me that indeed, a poorly written explanation of a statistical analysis method betrays the ignorance of the authors. Further, in these matters accuracy and diligence are very important, as they usually make all the difference between a correct and a wrong result.

The summary ? I think they might even have a signal of some sort there, but for sure I do not believe in A) their mass determination; B) their quoted significance (which I can only infer is obtained from some null model without allowing the null model to vary by nuisance parameters of any kind, as the paper does not mention such things as "systematics of the background model").

There would be a lot to say about looking for bumps in spectra after slicing and dicing the data such that the final state bodies have a certain angle and they come from a nuclear transition with an upper bound on the total energy... But I guess I will stop here. Suffices to remind those of you who know it the "split A2". Plenty ephemeral anomalies have been due to cutting the phase space of particle reactions.

So, in summary: I believe the result is not on solid ground (no careful study of systematic effects - what am I saying, no study at all of systematics!, only one background model cited, and further, one extracted from data selected arbitrarily, it seems). This does not mean they cannot possibly have bumped into something interesting: but if I were the referee of their article, my assessment would be "MAJOR REVISIONS, and run a F***ING SPELL-CHECKER before you even think of resubmitting!"