Tommaso Dorigo
In a recent post I discussed the conclusions of a study aimed at computing a small but very important correction to the theoretical prediction of the anomalous magnetic moment of the muon. The interest of this lays in the fact that the latter quantity is virtually the only one for which the Standard Model prediction exhibits a tension with the current experimental measurements among all the measurable parameters of the subnuclear world.
In a nutshell, while all the previous similarly cooked up theoretical estimates of that correction (which is called, in case you care to know, "next-to-leading-order hadronic contribution to the running of the fine structure constant") had a rather large uncertainty bar and a central value which pointed to g-2 being experimentally measured too high by over three standard deviation the reported result, based on improved techniques of calculation, indicates that there might be no anomaly after all.

But now a new study by Ch. Lehner and A.S.Meyer, based on a combination of the technique of the former result and a different more standard, one, ups the ante by claiming that in fact the hadronic contribution to the running of the fine structure constant is indeed likely to be where it was estimated before, and it also provides an uncertainty interval which is very small. The tension between Standard Model and experiments is restored, however now there is also a unresolved tension between this result and the previous one. (I am indebted to Sven Heinemeyer for pointing to this new result).

I must acknowledge I have not been able to read the new article yet, and I doubt that I would really be able to point my finger at the most important aspects of the new work, as this is after all not exactly my bread and butter - I am an experimentalist, so I am not supposed to grapple with the gory details of lattice QCD calculations. What I can do here, though, is to just comment on the following graph, which summarizes hundreds of person-years of theoretical studies and experimental investigations of the ephemeral physical quantity called the muon magnetic moment.

Maybe there is one thing I can quickly explain before showing the graph, though, for the benefit of those curious souls out there who ventured to read this far down. The muon is a heavier replica of the electron: it has a mass 200 times larger. However, it carries the same electric charge and the same spin of the electron. Although spin must not be confused with the quantity related to the rotation of a body around an axis, we can still think of the "spinning" charge of a muon as something that generates a tiny magnetic field. That magnetic field can be measured by precise experiments, but it can also be predicted by our revered theory of fundamental particles, the Standard Model. The two values are in disagreement, and that is why it is a very interesting pastime to try and figure out what is amiss.

Now for the graph, that reports in abscissa the value of this hadronic correction, which is directly related to the muon magnetic moment. Every row is a different theoretical estimate of that quantity, except the last one which reports the measurement-inferred value. 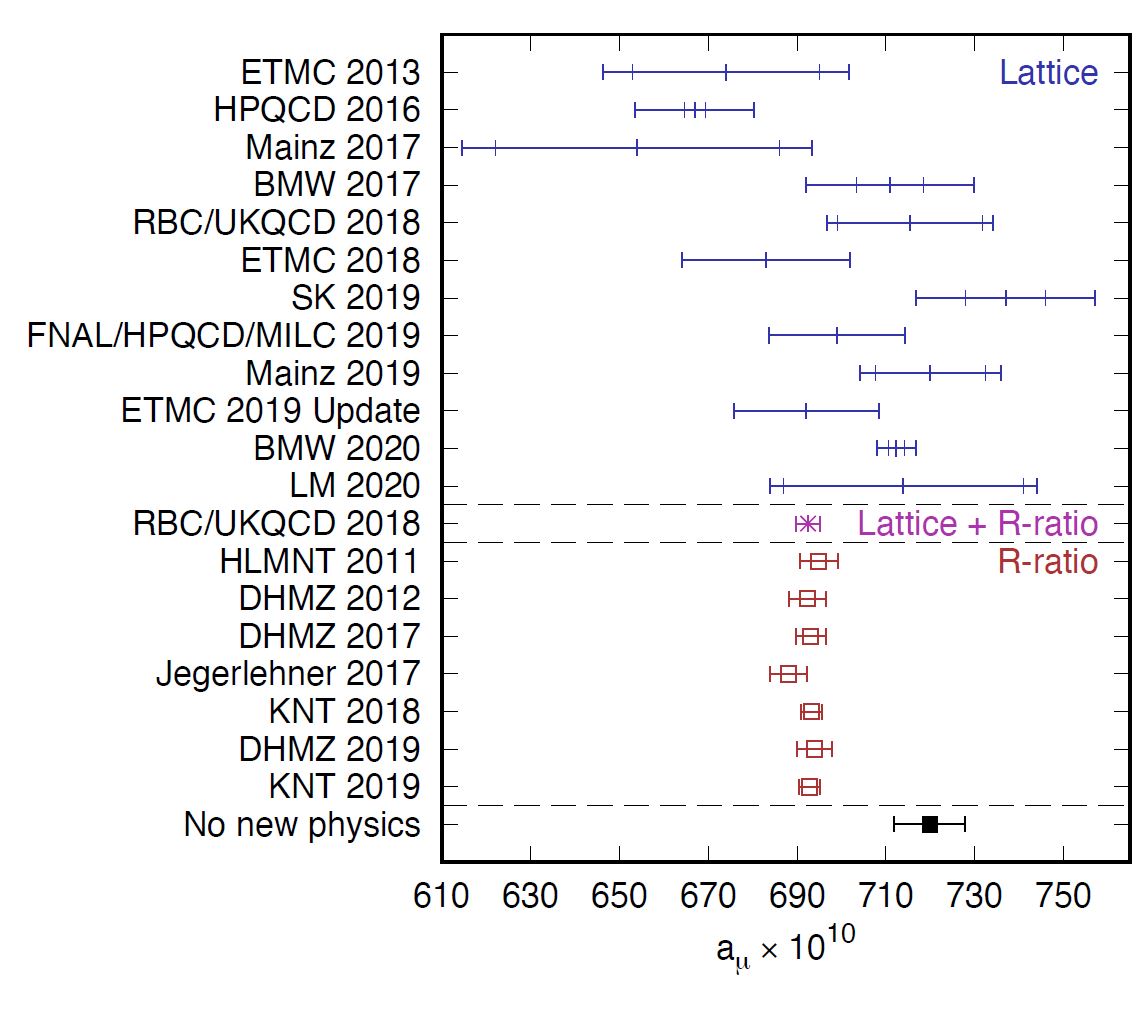 All theoretical estimates on the top part of the graph are performed by lattice QCD calculations; those on the lower part are estimates based on a different technique called the R ratio; and the estimate in pink at the center is the new result of the latest article. The result I had described in the previous post is instead the one labeled "BMW 2020" - no, it is not a fancy new model of the famous German car brand; rather, it is an acronym behind stands a group of theorists.


As you can see, the new result is a very strong assertion of an inconsistency between theory and experiment, while the previous one was leaning toward "nothing to see here, find another way to justify funding of another experiment". So what should we make of this situation, if we are unable to sort out the inconsistency of these different estimates? I suppose we can only say that maybe one group is right, or the other one is, or maybe they are both wrong. Only time will tell. For now, I do hope that the new measurement of g-2 which is underway at the Fermilab laboratory, 30 miles west of Chicago, will shed more light on this intricate puzzle.