Tommaso Dorigo
Ever since telescopes were first invented, by some dutch lens grinder in the late XVIth century, and then demonstrated to be invaluable tools for investigating the cosmos around us by Galileo Galilei in the early 1600s, there has been a considerable, steady effort to construct bigger and better ones. Particularly bigger ones.

The benefits of large aperture -the possibility to bring to focus a wider light front, which increases the telescope's resolving power linearly with the diameter and light gathering with the square of it - were understood quite early-on, but the crafting of large lenses and the construction of bulky, very long tubes was a difficult task (it still is), so the largest refractor telescopes were built in the late nineteenth century: the one built at the Yerkes observatory in Wisconsin stands at a diameter of 1 meter (40 inches); also famous is the second-largest one, the beautiful 90cm instrument of the Lick observatory on Mt Hamilton, CA, through which I had the pleasure to observe Jupiter and the Veil nebula. More recently, even slightly larger refractors were built, but it is fair to say that those two instruments are the most famous and worth citing in a short summary.

Apart from those efforts, the history of the rush for larger aperture is confined to instruments whose primary light-gathering surface is a mirror (usually crafted in a parabolic shape); sometimes a correction of the light front can be achieved by lenses. 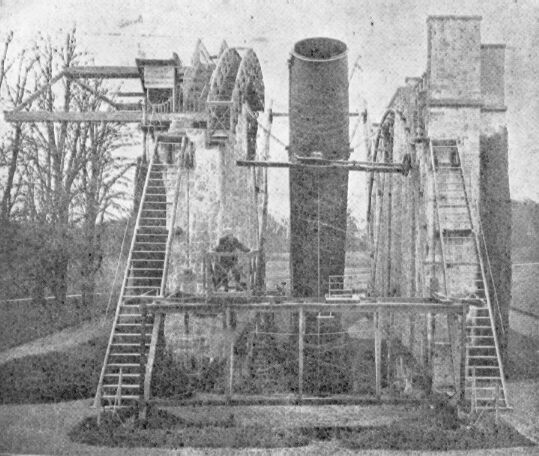 Intermediate peaks of construction effort of mirror-based scopes worth mentioning include the Leviathan, a 180cm-diameter tube (72 inches) used by Willam Parsons (Lord Rosse) in the 1840s in Ireland (see picture above). Because of the static mount the bulky instrument could not swing around by more than a few degrees, and was thus constrained to watch objects as the Earth's rotation brought them into view, few minutes at a time.

Combine that considerable operational diffuculty with the weather conditions in central Ireland, and you well realize its scientific impact was not as high as that which a 2-meter-class instrument could deliver; yet spiral arms in galaxies were first seen clearly with that instrument, as many drawings of e.g. M51 testify (that M51 and other well-known objects were galaxies and not nebulae is a fact realized much later by Edwin Hubble). I mention the Leviathan in this introduction as its static mount is a hindrance shared by the Terrascope, as we will discuss below.

Today we have several 10-meter-class telescopes in operation (a nice table listing a dozen of them is available here); we have also flown out of our annoyingly refracting atmosphere slightly smaller ones, and we have developed adaptive optics to cope with the smearing effect of air turbulence. 30-meter-class instruments are also design or construction. With these large instruments, we can directly search for exoplanets, as well as perform an amazingly wide range of research in astronomy, astrophysics, and cosmology. As an avid amateur astronomer, I cannot but rejoice at seeing this human effort in exploring the cosmos.

I was therefore quite interested to read, the other day, a preprint article by David Kipping which put forth a bold, speculative idea: the "Terrascope". In his article, the author suggests that the Earth's atmosphere could be used as a giant, focusing device. Indeed the atmosphere is, as I mentioned above, a refracting medium. A fraction of the rays of light entering it at a small angle will be deflected by an angle proportional to the length of their path through the medium. Because of the symmetry of the system (the Earth, which is approximately round), light rays from an object situated at infinity or nearly so, incident on the upper atmosphere, will converge behind the Earth in some sort of focal point - see graph below (taken from the article).

Alas, physics is a complex discipline, and there are a number of subtle effects that blur the above simple-minded picture, and make the idea of exploiting the focusing effect difficult to realize in practice. To start with, one cannot really talk of a focal point, but rather of a ring, extending from a minimum distance to infinity due to the equivalent of chromatic aberration effects. Then one should consider the fact that the medium is in part opaque (due to clouds); that the temperature of the air depends on height, causing more aberrations; that of course one must find a way to shield the direct light from daytime regions on Earth; and so on.

The article is quite detailed in considering all the above issues, providing an estimate of their deteriorating effect on the performance of a 1-meter telescope placed on the focal point (which, for targets located at infinity, turns out to be at a distance of about one Earth-Moon separation).

All in all, it seems that the light amplification offered by the complex Earth atmosphere could be tamed, and a 1-meter telescope exploiting it would be able to image faint, distant objects located behind the Earth with the same light collection power of a 150-meter telescope which watched the source directly. However, calculations of the resolving power show that the Terrascope would not be a telescope-grade performer in this respect: a few arcminutes resolution (worse than the unaided human eye!) can be expected, due to the fact that lensing may occur for objects that have significant angular separation. However, I imagine that the use of artificial intelligence combined with pre-existing images could manage to deconvolve the complex signal and improve this admittedly awkward performance.

Of course these calculations may need refining, and the whole idea of confining oneself to watching what happens to be behind the Earth, at any given moment, is not the most attractive setup astronomers have cooked up since Lord Rosse's static mount. But I do find the idea attractive enough that I hope more research will be done to determine the feasibility of a practical implementation of the Terrascope.