Becky Jungbauer
This really takes the cake - or, the rice krispies, as it were.

As Josh so cleverly described, General Mills took one for the team when FDA sent a warning letter about the claim on GM's Cheerios box that it lowers cholesterol. 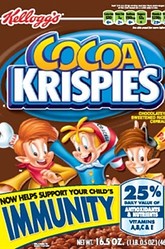 So when I saw "IMMUNITY" in splashy letters stretched across a box of Kellogg's Cocoa Krispies, I figured a warning letter would soon follow. But not so, according to Kellogg - and they may just be right.

Why can Kellogg make a claim but GM can't? Maybe FDA is partial to Snap, Crackle and Pop. But there is another reason, a loophole of sorts, that GM should have picked up on originally.

WSJ's Health Blog says that Kellogg "rolled out a revamped Rice Krispies product line this month that boosts the amount of vitamins A, B, C and E in the cereal to 25% of the recommended daily value from 10% of daily value," and "studies show that these vitamins 'play an important role' in the body’s immune system and nutritionists and dieticians generally recommend that at least 25% of nutrient intake occur at breakfast.'" That's the key. Kellogg's claim is a "structure-function" claim - it describes how a substance maintains a particular bodily function - while a "health" claim (like that of GM's) describes how that the substance prevents or improves a disease. Semantics, yes. But it makes all the difference in the world, because FDA approval is only required for health claims.

Now I know why it may be easier for a camel to enter through the eye of a needle than a rich man to get in to heaven - PR people are all crowded into that loophole, blocking the camels.
A Truth Universally Acknowledged
More Articles All Articles
About