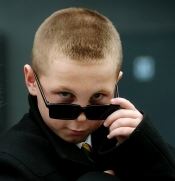 There is a dark undercurrent to Indiana's school culture, according to a recent statement, and it's created a secret smuggling web where young children acquire and trade illegal items.

The good news: The illegal items aren't marijuana or heroin.

The strange news: It's salt.

It's not our place to wade into the debate about whether or not rich Washington elites with private gardeners should be setting policy for local school districts on how to best serve the children in their communities. Former American Council on Science and Health Trustee Dr. Henry Miller of the Hoover Institute makes the case nicely that we should "separate school lunch and state." But there's a health issue to having kids control salt, rather than food companies or school cooks.

Years ago we defended the cereal maker Kelloggs from alarmist groups trying to manufacture a controversy about sugar and salt in their cereal. Its communications group had gotten the company mired in a publicity mess under the guise of "social responsibility," unwilling to defend their own product. So we did it for them in the interest of being a trusted guide for the public. We noted that a bowl of Rice Krispies is less than a tenth of the daily allowance for salt--less salt than a slice of whole grain bread.

"Their cereals are very nutritious," wrote American Council's president Dr. Elizabeth Whelan at the time. "Look at the label on any of them. They are absolutely nutrient dense, and they have to sweeten them a little so that kids don’t add way too much sugar on their own."

Adding way too much "on their own" is the key issue here also. If kids are smuggling in packs of salt because a centralized government insists that food be bland, they are far more likely to overuse it, and that will be worse for their health than letting local cooks be cooks. That is exactly the opposite of what The Healthy, Hunger-Free Kids Act is supposed to accomplish.

Quoted in Health Care News, cooking writer and teacher Julie Kelly worries that these policies will also cause kids to be turned off by "healthy" foods, a practice that could stay with them for life. Included in the same article is a mention that one school had to ration pickles to stay below salt guidelines. Now, I've got no dog in that pickle fight, because the only thing more useless to me than a cucumber is a cucumber rotting in salty brine. But telling a third grader that four pickle slices is unhealthy yet three is okay seems to be the kind of body shaming no one should encourage.

Jeff Stier, Senior Fellow at the National Center for Public Policy Research and former Associate Director here at the Council, says the issue could extend beyond paranoia about food--it could create paranoia about judgment.

Do we want to raise a generation of students who worry they can't even trust their own lunch?