Becky Jungbauer
Anyone in their late 20s who lived in Minnesota in 1991 remembers the record-setting Great Halloween Blizzard, which dropped several feet of snow across the state and bestowed upon children a few rare snow days.1

For folks living in the upper Midwest today (particularly the Great Lakes region), we're experiencing what one of my colleagues called a "land hurricane" and Mother Nature is setting more records. It is already becoming one of the strongest storms on record, and it's just getting going.

When the skies of October turn gloomy2

Local news meteorologists were trumpeting their warnings last night about the massive system working its way through the region. This morning I was sitting in the "eye" of the storm and it was still extremely gusty with heavy rains.3 The storm's central (barometric) pressure is equivalent to a Category 3 hurricane - as the weatherman said, we're "bombing out." The extratropical cyclones - or Chiclone, if you're in Chicagoland area - are causing serious damage along the way.

Not extratropical cyclones. And not Chicago.

What is barometric pressure? And what in the world is bombogenesis? A barometer measures pressure exerted by the atmosphere (using mercury, water or air). Take mercury, widely used until recently. Imagine a tall cylinder, closed at the top, with an open reservoir at the bottom. Pour some mercury in the reservoir. The atmosphere will push down on the mercury in the reservoir, forcing mercury up into the tube. The height of the mercury in the tube can be measured in inches. On a fair weather day, the typical standard unit of pressure - 1 atmosphere - is depicted by mercury sitting at a height of about 29.9 inches. Now imagine that the weather is starting to get a little scary. As the atmosphere becomes unbalanced, the amount of "pushing" the atmosphere does on that reservoir of mercury lessens, so the mercury falls a bit in height and back into the reservoir. Bad weather is in sight if the barometric pressure falls to around 29.5 inches. Now, bombogenesis takes this to the extreme - this is the rapid dropping of barometric pressure (roughly 0.7 inches, or about 0.029" per hour) over a 24-hour period, which causes winds to pick up a lot of speed - the atmosphere is attempting to balance out the low pressure gradients with the surrounding high pressure areas. Many Nor'easters are a result of bombogenesis.

The National Oceanic and Atmospheric Administration's surface weather map to the left shows the historically deep low pressure over Minnesota. The brownish circles indicate lines of equal pressure, or isobars. They indicate a strong pressure gradient and thus very powerful winds as the atmosphere works to stabilize itself. 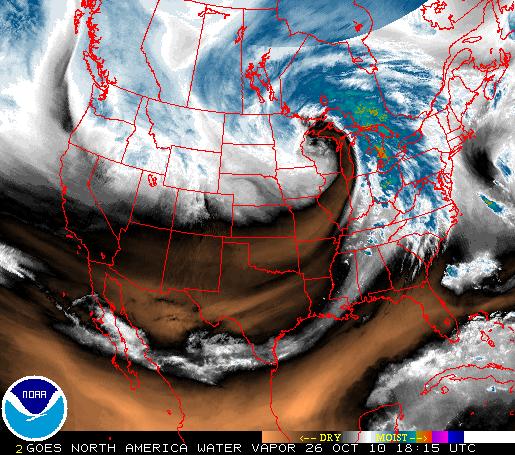 Note the comma shape to the system in the NOAA satellite water vapor map below. It is swirling in a counter-clockwise direction, as cyclones do in the Northern Hemisphere, and the strongest winds are on the edges. The pressure at the center (in this case, at 1:15 pm Central, in northern Wisconsin and the U.P.) is extremely low, whereas the pressure on the edges of the system is higher. The pressure inside and outside the cyclone need to balance, so pockets of air are accelerated from the high pressure to low pressure areas (the pressure gradient force). To make it more complicated, the Coriolis force is acting perpendicular to the rotational axis. The high pressure air on the outside wants to move in to the low-pressure area, but is deflected by the Coriolis force, so it ends up swirling counter-clockwise, as shown below right (pressure gradient force in blue, Coriolis force in red).

The NOAA map below shows active weather hazards today. See that huge swath of caramel brown stretching from the Dakotas to the Great Lakes? That signifies high wind warnings (hazardous high winds of at least 40 mph sustained, or gusts above ~60 mph). Surrounding that is a darker brown, meaning wind advisories (winds up to 30 mph). Eleven states are under a high wind warning, according to CBS News, with predictions of winds above 70 mph: Illinois, Wisconsin, Indiana, Iowa, Michigan, North Dakota, South Dakota, Nebraska, Minnesota, Ohio and parts of Kentucky. The yellow band nearly bisecting the eastern U.S. signals tornado watches, and is sprinkled with red tornado warnings. And the reddish-orange smear across North Dakota? That ain't the Republicans taking over, that would be a blizzard warning. Sigh. And it begins...