Gareth Fabbro
Given that there has been some recent interest in Uturuncu in the media, when this paper from the Bulletin of Volcanology came up among my RSS feeds it instantly piqued my interest.  Titled "Shallow seismicity, triggered seismicity, and ambient noise tomography at the long-dormant Uturuncu Volcano, Bolivia", it reports the findings from a seismic survey of the volcano between April 2009 and April 2010. 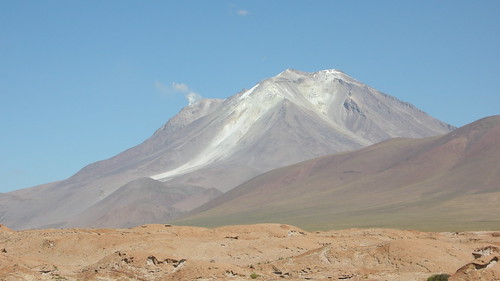 A volcano near Uturuncu, in Bolivia.  Photo CC BY-SA by einalem.
Uturuncu is in a remote part of the Bolivian Andes, and hasn't erupted for the last 271,000 years.  However, InSAR (satellite) measurements have shown it to be inflating by 1-1.5 cm/year, which is quite fast.  Modelling this deformation shows it is most likely in response to some increase in volume 15-17 km bellow sea level (21-23 km below the summit).  There is a zone of material at this depth where the velocity of seismic waves is found to be low compared to solid rock, and this implies it is partially molten (at least 14-27% melt, likely in some sort of crystal mush).  This suggests that the inflation is due to the injection of fresh magma.

This recent study placed a temporary network of seismometers around Uturuncu in order to map out the locations of any earthquakes that might be there.  They then did three things with it: attempted to determine the cause of the seismicity; used the low-level seismic noise to calculate some the structures found beneath the volcano; and looked at the effect of the 27 February magnitude 8.8 Maule earthquake.  With respect to the Maule earthquake, the team recorded the seismic waves as they arrived.  They found that these waves triggered a swarm of small earthquakes.  This has been observed before, and doesn't tell us much about the volcano itself, so I shall leave the discussion at that and move on to the cause of the earthquakes.

They recorded on average three earthquakes a day, although several times a month there would be a swarm of 5-60 within a few hours.  The largest was a magnitude 3.7.  The earthquakes clustered around the summit, at depths of around sea-level (The summit of Uturuncu is 6,008 m above sea level).  This is much shallower than the source of the inflation, so are the two related?

The first question is why do the earthquakes not descend deeper?  Globally, earthquakes are almost always found in the shallow crust.  In order to get earthquakes, the rocks must deform brittlely, that is by cracking or snapping.  Deeper in the crust, rocks deform ductilely, by flowing.  Different rock types will behave slightly differently, but the biggest controls on whether a rock flows or breaks are the temperature and the rate at which they are strained.  At Uturuncu we know the stain rate, so if we can calculate the temperature profile with depth then we can work out at what depth this brittle-ductile transition should be.

Fortunately, the temperature profile of the crust is easy to estimate (especially for shallow depths) as long as we know the amount of heat flowing out of the surface of the ground, the heat flux.  This is not that well known for Uturuncu, but it has been estimated to be between 100-200 milli-Watts/m2 which is quite high for continental crust but not so surprising if there is a large magma chamber 20 km below the surface.  Using these values, the measured strain rate two different rock types that are likely to be found beneath Uturuncu, the team came up with a depth of 8.5-0.8 km below sea level.  The reason there are no earthquakes below sea level is that rocks at that depth behave ductilely, and flow rather than break.  You can also see that further away from the summit the earthquakes go to greater depths; further away from the summit there is less heat transmitted up from the magma chamber 17 km below.  This made them reject their other possible explanation as unlikely.  You often see a sharp cut-off in earthquakes with depth directly above a magma chamber, as the solid rock above can break brittlely but the magma, as a liquid or mush, flows.  Because the shallow depths of the earthquakes can be explained by the brittle-ductile transition, there is no reason to believe there is a shallow magma chamber as well as the deep one.

The other option, rather than regional faults, is that it could be the hydrothermal system that was causing the earthquakes.  This happens at other volcanoes, notably the Campi Flegrei caldera outside Naples.  There is also an active hydrothermal system at Uturuncu, as shown by fumaroles.  Using the seismic waves arriving at their seismometers the team imaged an area of low seismic velocity under the volcano that likely corresponds to the system at depth.  However, for the reasons discussed above it is likely that the hydrothermal system at Uturuncu only plays a small part in the earthquake activity there.  The most likely explanation for the seismicity is that the inflation is activating pre-existing regional faults.

Should we be worried by the seismicity?  To answer that question we need to first know if the seismicity is unusual, for either Uturuncu or other similar volcanoes.  It is difficult to say what is normal for Uturuncu.  There have only been two previous seismic surveys, one in 1996-1997 and one in 2003.  As none of these used the same methods or stations, comparisons are also difficult, however it appears there has been little change in the seismicity for the last 14 years.  Looking further afield, this style seismicity doesn't seem that unusual at large volcanoes, and doesn't necessarily precede an eruption.

It is becoming clear that magma injection, like what is currently happening at Uturuncu, often occurs before an eruption.  Indeed, it is likely that it triggers some eruption.  However, the injection of magma doesn't always lead to eruption at the surface.  We don't have enough experience of eruptions of this sort to really tell what is going to happen.  While an eruption of Uturuncu is not going to lead to the end of the world, especially as it is so remote, it could still cause us problems.  I wouldn't loose too much sleep over it, but it is definitely a volcano to watch closely.