The Changing Composition Of The Eyjafjallajökull Eruption
By Gareth Fabbro | December 20th 2011 07:58 AM | Print | E-mail

Gareth Fabbro
As I have a long train journey and not much to do, I can use it to write about this recent open access paper on Eyjafjallajökull written by a couple of my colleagues in the lab. As it is open access you can go and read it for yourself if you wish, but I thought I would first explain a few of the key concepts discussed in the paper.

First, a quick reminder on the eruption itself. The timings of the various eruptive phases are important, as the researchers were looking not just at the eruption as a whole, but on how the magma changed during the eruption.

For 15 years prior to the eruption, increased seismicity and inflation of the volcano indicated that fresh magma was being intruded at depth beneath Eyjafjallajökull. In December this seismicity started migrating upwards, and on 20 March 2010 the first stage of the eruption occurred, at Fimmvörðuháls, just outside the summit glacier. This, if you remember, was more of a tourist attraction with large fire fountains. The eruption died down on the 12 April, just before the main event at the summit which grounded flights across Europe and which lasted until late May. 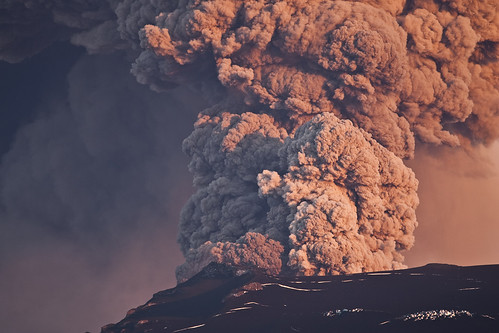 Red sunset at Eyjafjallajökull.  CC BY-NC-ND by fridgeirsson, via Ars Electronica on Fickr.

In order to get a better idea of what was going on, the researchers took multiple samples of mostly ash, and each sample could be dated to a particular day of the eruption. Often when scientists look at the products of an eruption they end up looking only at an average composition, especially for explosive eruptions. After ash or pumice gets deposited, it will often be re-worked and mixed by the wind or rain. However, when we start looking at the details of any single eruption, we often find that the composition of the magma does not remain constant throughout. This is what we find at Eyjafjallajökull.

The first thing, which was noticed almost immediately, was that there was a large difference between the magma from Fimmvörðuháls and from the summit eruption. Basalt was erupted from Fimmvörðuháls, while andesite was erupted from the summit. This showed that it was just the interaction of the magma with meltwater from the glacier that led to the summit eruption being so much more explosive than the eruption on the flank. So what caused it to change?

Below is a graph which shows the chemical compositions of the various magmas erupted by Eyjafjallajökull. Magnesium is plotted along the bottom, and this is used to quantify the amount of fractional crystallisation that has gone on. Magnesium prefers to be in the crystals, so the more crystals that are removed (the more 'evolved' the magma becomes), the less magnesium is left in the magma. We can see this in the difference between the whole rock and glass compositions of the Fimmvörðuháls products plotted below. When molten rock is quenched, or cooled quickly, it doesn't have time to crystallise and so forms a glass. The glass composition is therefore the composition of the melt, while the whole-rock compositions include the crystals as well. Going from the blue Fimmvörðuháls whole rock samples on the graph below and moving left, we simulate fractional crystallisation and produce the Fimmvörðuháls glass (shown in green)

Also on the graph is the composition of the last eruption at Eyjafjallajökull, from 1821. This is important because it would seem that the magma chamber from that eruption was not entirely emptied,some remained to mix with the new magma in 2010. This can be seen on the graph below in the composition of the ash that was erupted on the first day of the summit eruption (marked Eyjafjallajökull 15 April2010). This falls on a mixing line between the 1821 magma and the Fimmvörðuháls glass; that is that if you took one part of 1821magma, and added one part of Fimmvörðuháls glass you would get a magma with the same composition as the 15 April magma. 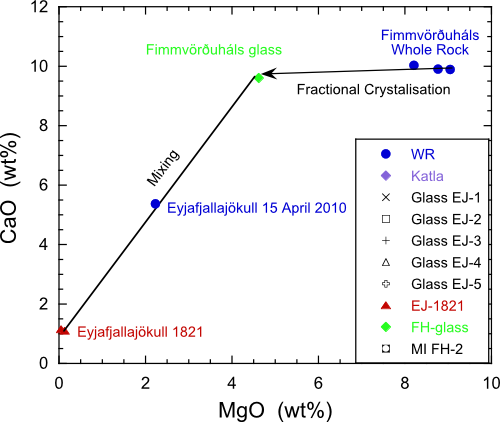 Now lets take a look at the full diagram published in the paper (below).  Things start to get a little more complicated, as the magma erupted later doesn't fall on the same mixing line. Samples collected from the summit eruption are labelled EJ-1 to EJ-7, larger numbers referring to samples collected later in the eruption. If the samples all fell on the mixing line shown in the first diagram, it would be easy to explain as just a change in the proportions of the two magmas in the mix: as the eruption continued the amount of fresh magma contaminating the leftover 1821 magma could change. However, they don't fall on a single line, so the only way it can be explained is if the composition of the fresh magma changes, as well as the proportions. 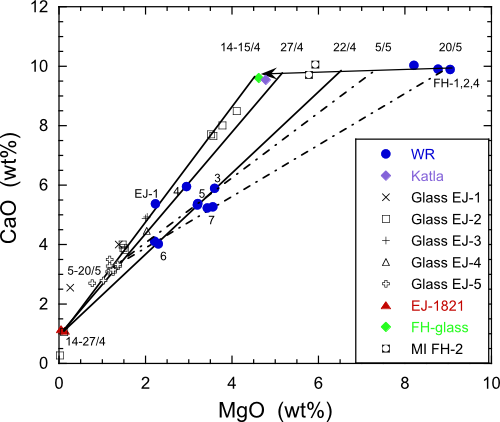 Variations in the composition of Eyjafjallajökull erupted products during the2010 eruption. From Sigmarssonet al., 2011. CC-BY.

This might at first seem unlikely, but if we think about it maybe it isn't so unexpected. The remnants of the 1821 eruption have had almost a century to cool and solidify; if they weren't completely solid they were probably at least a fairly rigid crystal mush. From the record of the deformation and seismicity we know that the ascending basalt paused for about three months beneath the 1821 magma chamber. It is therefore likely that before it could be erupted, the basalt needed to heat it up to re-melt and re-mobilise the 1821 magma. During this time the basalt would itself start to cool and fractionate, evolving along the fractionation line in the first diagram towards the composition of the Fimmvörðuháls glass. As the eruption preceded,the incoming magma was sourced from progressively deeper in the system. The deeper magma had less time to cool and fractionate, and so was less evolved.

All this is summarised on the graph below. The red line shows how primitive the incoming basalt was, and shows a general increase with time. The blue line shows the fraction of the erupted magma that came from the fresh basalt. One interesting thing is the fact that the amount of basalt declines almost to zero by the end of the eruption. The authors of the paper speculate that it is this that caused the eruption to stop, rather than the volcano just running out of magma. 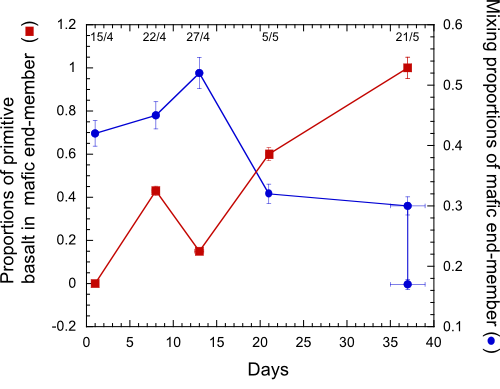 Mixing(and mingling) proportions as a function of time of primitive basalt in the mafic end-member (scale on left y-axis) and that of basaltic melt in the tephra of Eyjafjallajökull. From Sigmarssonet al., 2011. CC-BY.

The good thing about this paper is that it is open access. That means that you can go and check it out for yourself.