Gareth Fabbro
Simple answer: Just don't be there in the first place.

I am currently on fieldwork on Santorini, which does involve a fair bit of walking from outcrop to outcrop. Walking past deposits from the last big eruption, the Minoan, I can't help but be impressed by the size of some of the chunks of rock the eruption transported. To pass the time, I have been playing a game of "what would I do if the volcano erupted now", thinking about pyroclastic flows and trying to work out where would be safest. So just a quick post until I get back and can write up the trip in some more detail.

Firstly I should point out that the chance of a Minoan-sized eruption any time soon is remote, and we would probably have a fair amount of warning first. Most likely the next eruption will be a small effusive one (with lava flows) or a small explosive one (dusting the islands with a thin ash or pumice layer). These would most likely occur on the small, uninhabited island of Nea Kameni at the centre of the caldera, and wouldn't cause too much destruction on the surrounding islands where everyone lives. Just for fun, however, I still planned out how I would escape a larger eruption. Small pyroclastic flow at Mayon volcano in the Philippines on September 23, 1984.  Photo Chris Newhall, (U.S. Geological Survey)
I should also point out that this is in no way official advice, please don't try this at home.  The only way to stay safe on these sorts of volcanoes when they are active is to stay away, and to follow official evacuation orders and exclusion zones.  The following is just my ponderings on the workings of pyroclastic flows.

The most destructive force of a Minoan-sized eruption, locally at least, is the pyroclastic flows.  The first thing you should know if you want to escape from a pyroclastic flow is that you can't outrun them.  They can reach speeds of up to 300 mile/hour; if you are in their path there is no escape.  In order to escape them you need to get up high.  On Santorini, most of the islands are covered in deposits from Minoan pyroclastic flows.  However, some of the high points appear to have been untouched. Mount Profitas Ilias for example, at 552 m appears to have escaped most of the pyroclastic flows.  Unfortunately, the highest point of the smaller island of Therasia where I have been working (Mount Viglos) at only 295 m is covered in Minoan pyroclastic deposits. 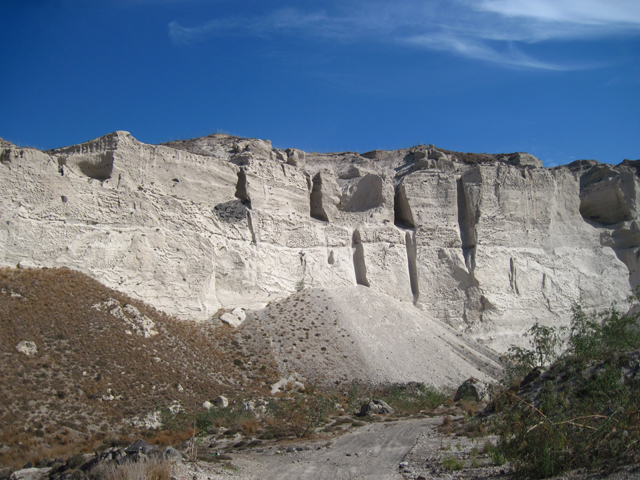 Deposits from the Minoan eruption in a quarry cliff near Fira on Santorini.  Note the large, black bomb near the centre of the picture.  Photo: Gareth Fabbro 2010.
Pyroclastic flows don't, however, behave quite as you might expect from your experience of everyday flows.  While flows of water, in a river for example, are driven only by gravity, pyroclastic flows have another source of energy.  They entrain air, and because they are hot they heat it up.  Hot air is less dense than cold air, and they also deposit some of the heavier pieces they are carrying, lowering their density.  In some cases pyroclastic flows can become less dense than their surroundings; at this point they then lift off to form a secondary plume, at some distance from the vent.  More importantly if you're trying to find a safe spot, pyroclastic flows can pass over higher obstacles than you might think.

On land, obviously the best thing to do is to get as far away from the volcano as possible.  However, on a volcanic island like Santorini, this isn't so simple.  It may be tempting to head to the coast to wait for a rescue boat, but as we have seen the lowlands are not safe.  Even if you are in the shadow of a mountain like Mount Profitas Ilias, pyroclastic flows can still come round the side and spread out.  Open water is also not an obstacle.  Pyroclastic flows can travel large distances over the sea, due to their low density.  There is also the risk of a tsunami, such as the one that followed the caldera collapse during the Minoan eruption.  Having said that, the high ground is not always high enough, so it is not obvious what the best course of action would be.

So basically, you don't want to be anywhere near a volcano when it sets off a pyroclastic surge.
Tuff Guy
More Articles All Articles
About