Auralization, Acoustics And The Quest For The Perfect Concert Hall
By Chris Rollins | December 24th 2008 12:09 AM | Print | E-mail

Chris Rollins
When many of us go to see a live performance of some kind, like a play or a concert, we are often mostly concerned with the quality of the performers. We've gone to hear the flowing sounds of the San Francisco Symphony or the clear voices of Broadway singers. But what many people overlook, and what may be the most expensive and time-consuming aspect of any musical or theater production, is the effect of room acoustics on the sound coming from the stage. Now, with the massive increases in computing power over the last decade or so, acousticians are able to predict far more accurately how a given space will respond to sound, paving the way to more optimized concert halls and theaters. 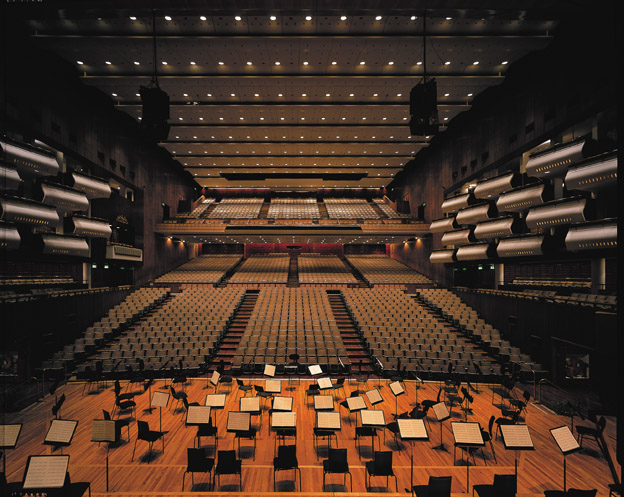 Long, thin and tall: The Royal Festival Hall in London is an example of the tried-and-true shoebox design of theaters. Image Credit: University of Salford

To those of us who haven't done extensive research on the subject, it can seem like acoustic design is a lost art. In fact, with modern acoustic modeling and analysis, we often get very good acoustics on the first try. Old theater designers often had to use trial and error, usually mimicking designs that had previously worked well, and those theaters with bad acoustics often met the wrecking ball. In modern times, performing arts centers are so expensive that bad acoustics cannot be tolerated - leaving architects and engineers dependent on acousticians for major decisions.

So, what parameters are useful in determining the acoustic characteristics of a room? A useful place to start is with the physics of sound waves. Sound waves act much like light waves - when they hit a surface, they are either reflected, absorbed, diffused, or any combination of those three. Surface characteristics can be thought of in terms of energy - during pure reflection, all energy from the sound wave changes to the same direction, like a pool ball hitting the side of the table. In pure absorption, all energy from the sound wave penetrates the surface and vibrates the molecules there, creating heat. In pure diffusion, no sound energy is converted, but it is all scattered in different directions. For example, continuing with the light analogy, matte paints are more diffuse than glossy - more light is scattered away from the matte paint in different directions and therefore it does not look as bright as the glossy paint. 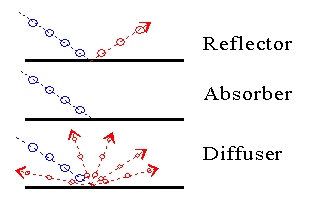 Energy Changes: Incident sound waves respond differently depending on the properties of the impacted surface. Image Credit: University of Salford

Designers use all types of materials when designing concert halls. Engineers want the audience to experience fullness of sound, so they often use hard materials with high reflectivity to enhance the illusion that the sound is all around you. This also causes notes to blend together, which is beneficial until the notes are too indistinguishable from each other. Therefore, the surfaces need to be reflective, but not too reflective. Additionally, engineers try to reduce the initial time delay - the length of time between the first time an audience member hears a sound directly from the performer and the second time he or she hears it, after its first reflection. The best concert halls in the world have very low initial time delays - on the order of milliseconds - which create feelings of intimacy between the performers and the audience. Large initial time delays (anything over about 15 milliseconds) create the feeling that the listener is in a large, cavernous space and is distanced from the performers.

In addition to materials, the shape of the space is very important. Many theaters have adopted a "shoe-box" design: the performers sit at one end of a narrow room with a tall ceiling that goes back farther than it is wide. This shape increases side reflections for the audience, lowering the initial time delay and increasing reverberation time. It also contributes to a "fullness" of sound by creating the illusion that the sound is all around you: sound waves from the walls reach each of an audience member's ears at different times, signaling to the brain that the listener is in a room. New, more complex designs such as the "vineyard terrace" design of Bridgewater Hall in Manchester, UK, subdivide the audience along the long direction of the room (dividing audience members between shoulders) to maximize the effects of side reflections. 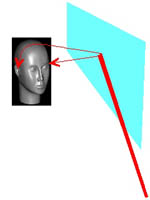 Auditory Illusion: When sound is reflected from the side, it reaches the ears at different times and creates the feeling of being surrounded by the music. Image Credit: University of Salford

How, then, do acousticians determine what coverings and materials to use in a performing arts center? They used to use physical models, usually at about a scale of 1:20. A major problem, however, was that the frequency of the testing tones needed to be raised by the same factor as the physical scale - making a bass note sound like a violin, and turning violins into ultrasound. Modelers were capable of producing these tones - however, at the very high frequencies needed to test their models, air becomes a much more efficient damper of sound energy and the interaction between the air, materials, and sound changes.

Luckily, now acousticians have computer assistance. The increase in computational power over the last decade or so has made modeling a performing arts hall possible. Engineers can now create complex maps of nodes in a performing arts space and simulate different frequencies to determine the sound density of certain frequencies at certain points. The software allows for changes to be made to the structure or composition of the room quickly and cheaply, and with a prediction of the acoustical parameters.

Acousticians can now also involve archectural considerations into their designs, with software developed by Dr. Peter D'Antonio of RPG Diffuser Systems and Prof. Trevor Cox of the Acoustics Research Center at Salford University in the UK. The software allows architectural bounds on surfaces, and then varies those surfaces within those bounds, calculating acoustic parameters with each change. The software then uses optimization schemes to determine what configuration will, say, maximize the uniformity of the sound. 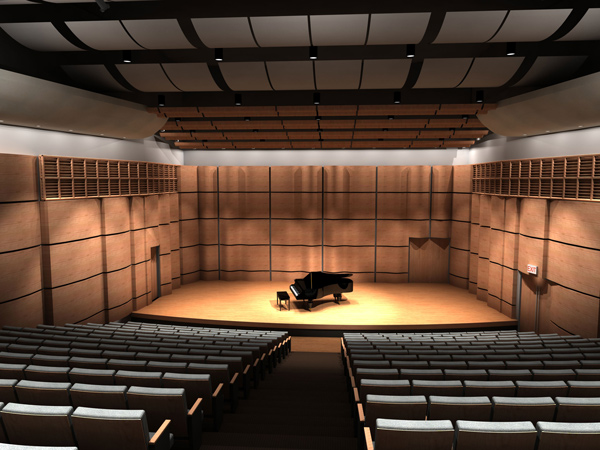 Optimized Architecture: The curvilinear wood shapes on the ceiling and walls were determined using software developed by D'Antonio and Cox that optimizes surface shapes depending on acoustic characteristics. Image Credit: Acoustical Society of America

Another technique, called auralization (like visulization for your ears), can also provide a preview of what performers will sound like to an audience. First, engineers need a recording from an anechoic chamber - a room where all sound is absorbed into the walls and none is reflected, kind of like talking into a black hole. If there are no reflections, then all the microphone can hear is the pure direct sound from the performer inside the chamber. Acousticians can then use the recording with computer programs that model acoustical features of a room. Since there are no reflections from the original recording, all reflections created by the software (and based on the input characteristics of the room) are due to acoustical features. Auralization puts a performer and an audience member in a room virtually, allowing for a more qualitative preview of a given space.

There are constant developments in the field of acoustics. And with computers continuing to get faster, we can expect to see some radical new and innovative designs for performing arts centers in the near future. Engineers will be able to experiment and work with architects, designing spaces that are both beautiful and functional without the risk of poor acoustics.