Chris Rollins
The cathedral termite, found in parts of Australia, is capable of creating mounds for the colony well over 10 feet high. Individual cathedral termites are just standard-looking bugs - head, thorax, abdomen, legs, and so on, with a tiny little primitive brain. But when combined with others of its species, the cathedral termite is capable of constructing a huge, complex hive to house the colony. Unlike human building projects, however, there is no foreman, no plan, and it's unlikely that any termite even knows what it is helping to create.

How is this possible?

The answer lies in the fact that sometimes, a system can provide more complexity than the sum of its parts - leading to what scientists call "emergent behavior." 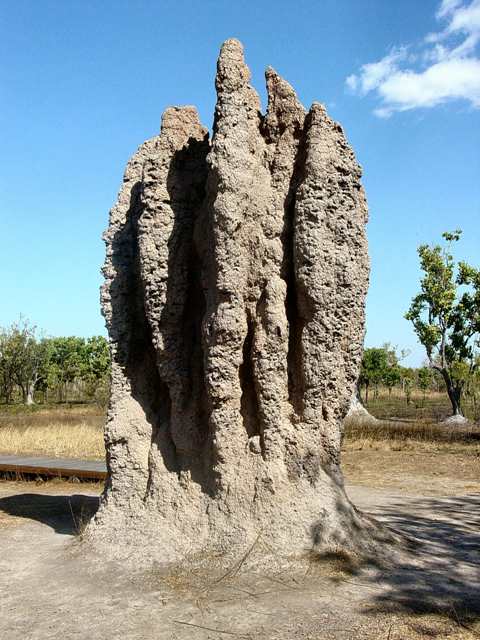 Emergent Spires: The aptly named Cathedral Termite builds enormous structures to house the colony despite there being no boss telling every worker what to do. Photo Credit: Wikipedia

Emergent behavior, or the spontaneous creation of order, is present all around us. Insects are a good example because they are familiar to us and manage to undertake massive building projects which we can appreciate. Other parts of the animal kingdom also display autonomous order - fish organize themselves into schools that move in concert; birds and pack animals flock or herd in a similar manner. And nonliving examples also abound - natural magnets align themselves into a common North-South orientation and crystals can form from liquids, showing a spontaneous increase in order despite the lack of a more "intelligent" force.

There's a major thermodynamic problem with all of this, of course - entropy, a measure of disorder, is supposed to continually increase. The universe tends toward chaos.

How, then, can spontaneous order arise, especially in a purely physical system?

Entropy still must increase, even when crystals form or birds flock, but the important distinction is in where the entropy increases or decreases. It turns out that nature will allow entropy to decrease in certain areas provided that it increases elsewhere to compensate. For instance, when a sugar solution begins forming crystals those crystals have a net lower energy level than the free-floating molecules of sugar in the solution. When the sugar enters the structure, it loses energy that is transferred to the water in the form of heat: the most disorganized form of energy.

Therefore, the crystalline portion of the solution has now decreased in entropy while the total system - including the water and the crystal - has had a net increase in entropy.

Animals, of course, expend energy in their muscles to produce order. A short set of instructions in an animal's brain instructs it to use its muscles in a certain way based on the sensory input the brain is receiving about the other animals around it. For instance, flocking behavior can be fairly accurately described using the following three rules, developed in 1986 by Craig Reynolds:


Reynolds developed a program called "Boids" to simulate flock behavior using those three rules. The visualization is surprisingly realistic given the simple nature of the instructions. "Boids" also demonstrates something interesting about the spontaneous creation of order - patterns are very predictable over the short term, but completely unpredictable over the long term. Each millisecond, it's easy to predict where a flock of birds will be, but trying to predict the flock's speed and direction after looking away even for 10 seconds is nearly impossible.

Living systems, therefore, flirt with the boundary between complete randomness and order - a term Christopher Langton, a leading researcher in emergent behavior, termed "the edge of chaos."

Researchers are desperately trying to mimic this behavior in the laboratory. Numerous projects involve robots that simulate swarm or herd behavior, and there are also numerous computer programs that simulate emergent behavior. Langton himself created the Swarm Development Group, a society that brings together researchers trying to decipher and model behavior.

Recently, Sanjay Joshi, assistant professor of mechanical and aeronautical engineering, and associate professor of psychology Jeffrey Schank at UC Davis, modeled the behavior of rat pup cubs as they felt their way around a box. Rat pup cubs can barely see and find their way mostly by feeling. When put in a rectangular box, they tend to find a corner and stick to it. Joshi and his team developed robots that mimic this behavior using only a small set of instructions that instruct the robot to stay in contact with a surface, if possible. As it turns out, the robots also tended to find a corner and stick to it - the important distinction is that they weren't ever told explicitly to find a corner, it's just what happened. 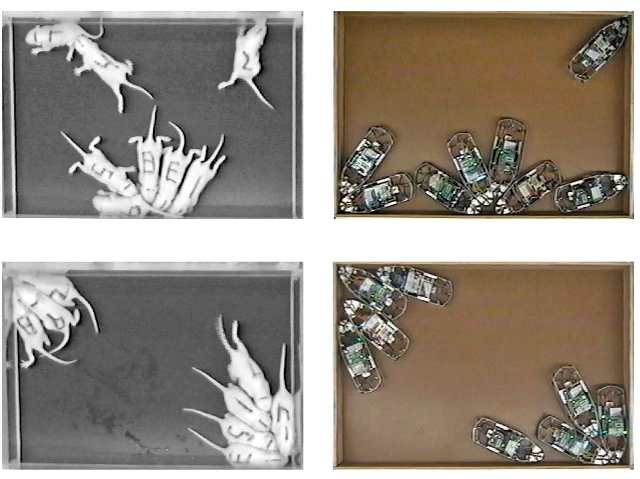 Simulated Life: Robots with a sensory system similar to rats group against corners with minimal instructions. The robots weren't told to find corners any more than the rats were. Photo Credit: UC Davis

Scientists are getting closer to the fine distinction between chaos and order. If they can figure things out, theories about emergent behavior have applications far beyond understanding the animal kingdom. The military is interested in getting unmanned vehicles (in air and in space) to fly in formation. World markets also display a sort of emergent behavior (much like Adam Smith's "Guiding Hand" in The Wealth of Nations). Neural networks, which work by parsing responsibility for processing into many tiny parts acting on simple rules, are a promising new computing method.

Let's let the Boids speak for themselves.

---
Boids, by Craig Reynolds himself.
The UC Davis Robot Lab
Welcome to my Moon Base
More Articles All Articles
About