Johannes Koelman
Can a subject be too remote from the domain of traditional physics for physicists to dare applying their methods of research to it? Unlikely. If the objects under investigation in some remote area of research can be subjected to clean and unambiguous experiments, you will likely find physicists dabbling into the area.

Take a flock of birds. If the methods of statistical physics work for a gas consisting of molecules, then why not also for a flock of birds? In fact, a flock of birds is potentially a more suitable and rewarding system to study. Reason being that in a gas of molecules, one can impossibly measure the position and velocity of all individual members. However, with modern digital measurement techniques, this can be achieved in flocks of birds. 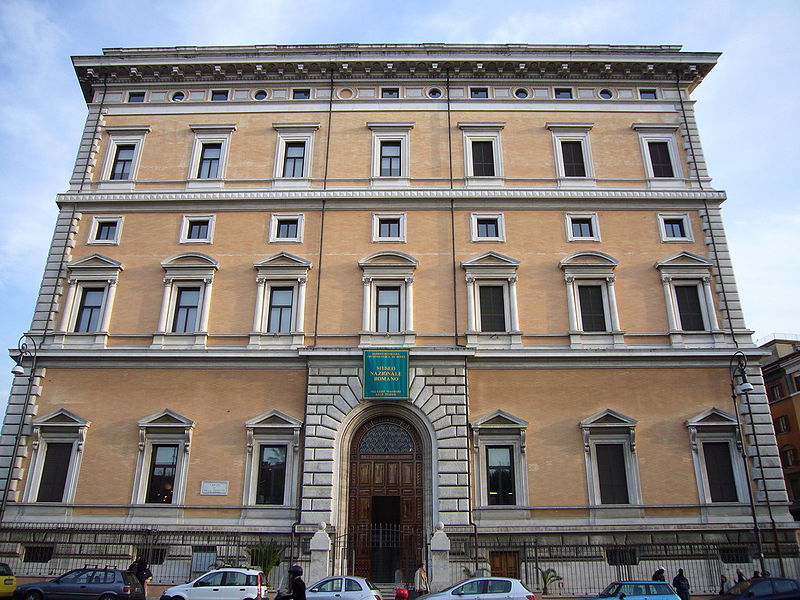 And that is exactly what a group of Roman physicists did. As location for their experiments, they selected the roof of Palazzo Massimo – Museo Nazionale Romano, in the city center of Rome. An ideal location, as starlings gather there before sunset. Using stereometric digital photography and computer vision techniques, they measured in real time the positions and velocities of individual starlings in flocks of various sizes. A few days ago, they reported their results.

It is well-known that in a flock of birds, despite the absence of any central coordination, a synchronized dynamics emerges. This collective behavior for the flock follows from simple rules followed by the individual birds. The Roman study demonstrates that the apparent orchestration of the flock is more robust and more profound than expected. It appears that the behavior of the flock as a whole is independent of the size of the flock. More in particular, two birds 1 m apart in a 10 m wide flock move as synchronized as two birds 10 m apart in a 100 m wide flock. Even more astonishing, it appears that this behavior can be extrapolated down to two birds: a flock of arbitrary size (the researchers measured flocks from 122 to 4268 birds) behaves similar to a 'flock' of two birds. 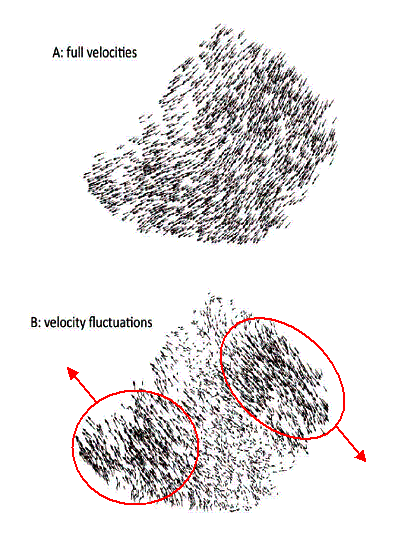 Interestingly, the relative velocity plots typically show two blobs in an pulsating movement. It is as if a flock consists of two large 'quasi-birds'. These 'quasi birds' scale with the size of the flock. Which individual birds constitute a given 'quasi-bird' will vary with time, and so will the size and shape of each 'quasi-bird'. 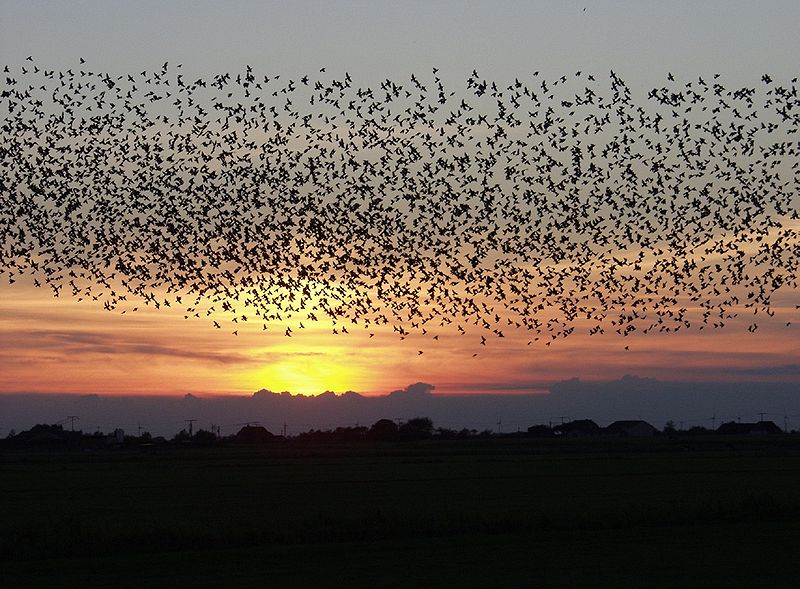 The authors note the stark difference between the dynamics observed for flocks of birds, and that of swarms of bacteria. Such swarms also show a collective dynamics, yet a correlation of movements between bacteria typically decays away over more than a few bacterial diameters. In contrast, for flocks of birds such correlations extend over the full size of the swarm. The authors investigate to what extend this behavior is akin to the emergence of superconductivity in certain materials. Seeking an explanation in this direction might seem far-fetched, but there are similarities between superconductors and flocks of birds. In both cases emergent collective behavior results in sample-wide correlations.

Alas, the authors come to the conclusion that Goldstone's Theorem, whilst explaining the scale-free correlations for superconductivity, does not apply to velocity correlations in flocks of birds.

So what is the explanation? The authors argue that birds in a flock might form a system that in some way is remotely related to neural systems that also create long range correlations. In this loose analogy, the birds and the interactions and adjustments amongst them form the 'neural connections' of the 'collective mind' of the flock. They conclude: “How starlings achieve such a strong correlation remains a mystery to us”, but offer the hope: “Our empirical results [..] may contribute to move the fascinating 'collective mind' metaphor to a more quantitative level”.

For an average hammock physicist this gets dangerously close to abracadabra.

May I offer a more down-to-earth hint towards an explanation?

Birds in a flock behave no different than molecules in a liquid. So, imagine flocks as droplets. Droplets of birds held together by binding forces that manifests itself as a surface tension. Such droplets can pulsate. And typically, the lowest mode of vibration is far the strongest. Such a ground-mode vibration consists of... two halves of the droplet in a pulsating motion...

http://arxiv.org/trackback/0911.4393v1
The hammock physicist
More Articles All Articles
About