Chris Rollins
Thanks to NASA and the LCROSS satellite, I may soon know where the best place is to build my Moon Base. A new analysis of the data from the Lunar Prospector, launched in 1998, shows large concentrations of hydrogen around the lunar poles. If that hydrogen is in water form, then astronauts could potentially use it on a permanent outpost.

Certain lunar craters are permanently shadowed, never reaching temperatures above -170 C. Many of these areas also contain significant amounts of hydrogen. If that hydrogen is attached to oxygen in water ice form, it should be stable for millions of years. Astronauts deployed to a base near one of these sites could use this water since hauling it from Earth would be prohibitive.

Dr Vincent Eke, in the Institute for Computational Cosmology, at Durham University, said that water ice may be present in huge quantities in these craters: "If the hydrogen is present as water ice then our results imply that the top meter of the moon holds about enough water to fill up Kielder Water." Kielder Water is a manmade reservoir in the UK that holds 200 billion liters of water. 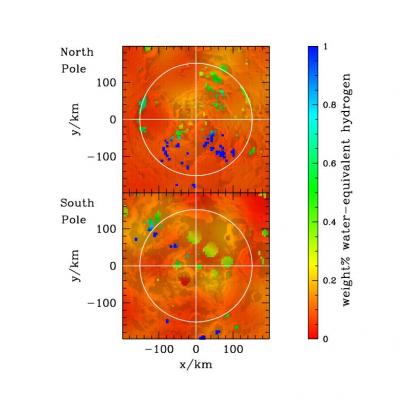 Water? A new analysis of data from the Lunar Prospector shows large amounts of hydrogen, hopefully in the form of water ice, is present at the lunar poles.

As exciting as the new analysis from the Lunar Prospector is, it's possible that much of that hydrogen is present because it was deposited there by the Sun. The solar wind contains protons, which impact the dusty surface of the moon and stay there. Protons may have fooled the instruments on the Lunar Prospector into thinking that water is present when there isn't. So, how is NASA going to tell whether the hydrogen is in water form? That's where LCROSS comes in.

The Lunar CRater Observation and Sensing Satellite, or LCROSS, is a probe developed by Northrop Grumman of Redondo Beach, California, that will launch with the Lunar Reconnaissance Orbiter (LRO) and is designed to impact the lunar surface. Situated underneath the LRO during launch, LCROSS will stay attached to the LRO while it flies toward the moon. After entering lunar orbit with the last stage of the Centaur rocket, LCROSS will detach from the LRO and maintain an orbit with a high inclination, nearly perpendicular to the plane of the solar system. Eventually, LCROSS will separate from the shell of the Centaur rocket and send it hurtling toward a crater on the south pole of the moon, where it will impact at a relative speed of approximately 2.5 km/sec. After impact, LCROSS will fly through the plume generated by the empty booster, collecting data and sending it back to Earth, before impacting the same crater itself. The second plume will be analyzed by ground-based observatories as well as the LRO and Chandrayaan-1, the recently launched Indian lunar orbiter, both of which will send back data from different perspectives. 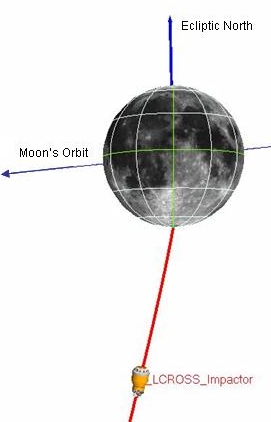 Dual Impact: The LCROSS orbiter and rocket booster shell will impact the moon's south pole at an angle nearly perpendicular to the surface, sending up a large plume that will hopefully contain water vapor.

LCROSS will use a mix of infrared imaging and spectroscopy to determine if water exists in the plume. It's possible, although unlikely, that the spacecrafts will impact in areas without water ice. This could be because there is none there at all, or because the regolith is very heterogeneous and the sections containing water were missed by the probes. Still, Northrop Grumman engineers state that the instruments can detect water even if it only comprises 0.1% of the plume.

The information gathered, whether water ice is detected or not, will be a huge help to NASA engineers trying to design a moon base for astronauts. Hopefully, ice is detected and NASA can begin to nail down a landing site, as well as tackle the other technical challenges of creating a base on the moon, since water won't be much of a problem.
Welcome to my Moon Base
More Articles All Articles
About