Home > Psychology > Welcome to my Moon Base

Chris Rollins
To some, it's a vague remembrance of a scene from a past life. Others attribute it to viewing something in real life they dreamed the night before. To the leather-clad protagonists of the movie "The Matrix", it happened whenever the machines altered something about the virtual world they created. Regardless of the explanation, déjà vu is the common and unmistakable experience of feeling as if whatever sensory input we're receiving has been received before - even though we can't pinpoint the exact source. 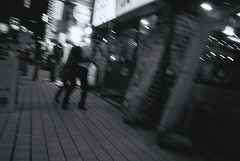 Déjà vu can be a surreal and indescribable experience. Photo Credit: Flickr
For most of the 20th century, the elusiveness of déjà vu has relegated it to the domain of the paranormal. Even as recently as 1990, scientists lumped déjà vu experiences with clairvoyance and ghost sightings. Akira O'Connor from the University of Leeds states that the subjectiveness of the experience kept it from being brought into mainstream psychology for a long time: "Because (déjà vu) feels so subjective, psychology, in striving for objectivity, has tended to shy away from it." But a flurry of research in recent years has shed some light on the phenomenon.

Déjà vu experiences are difficult for people to describe and because of their random occurrence psychologists are often only able to get a report of a previous episode, rather than see one take place in front of them. However, in 2006 a group at Leeds managed to induce déjà vu-like feelings in 10 of 18 subjects through the use of hypnosis. Researchers showed hypnotized subjects a set of words in red frames while telling them that when they were awake, they would recognize the word but wouldn't be able to recall the last time they saw it. When shown the words in the red frames after awakening, some of the subjects reported a feeling that felt similar to déjà vu.

O'Connor, who also oversaw the hypnosis study, proposes that the ability of the researchers to suggest away the direct memory of seeing the word while still maintaining the familiarity of it implies that the two processes are separate in the brain. "This tells us that it is possible to experimentally dissociate these two processes, which is really important in establishing that they are indeed separate."

The two processes that O'Connor speaks of are the recognition of something observed and the familiarity of that same observation. When we recognize a particular scene or object, we first determine what we are seeing and if we've seen it before, then a different part of the brain decides if it's familiar. In the hypnotism study, the researchers tried to stimulate the second response - familiarity - without stimulating the recognition response first - which is what they believe at least partially happens during an episode of  déjà vu.

Recent research has created similar results. Anne M. Cleary of Colorado State University just published a study where she used famous people and places instead of words to try and draw out the familiarity aspect of memory without the recognition. First, subjects were shown a list of celebrity names. Then, they were shown pictures of celebrities and asked to determine how likely it was that the person whose picture they were seeing had their name on the list. Even when the subjects were unable to name the celebrity whose picture they were seeing, they generally had a sense of whether or not his or her name was on the list. This indicated a familiarity with the celebrity, but without any specific memory.

An additional experiment further isolated the brain's familiarity circuit. Cleary showed participants a list of words and then asked them to rate a different set of words on how familiar they sounded. Even though the subjects couldn't remember the words on the original list, words on the new list that phonetically sounded like words on the original list were rated as familiar. The results suggest that perhaps the same phenomena would take place when similar visual fields are presented to the eyes, especially in conjunction with other sensory data that mirrors experience in some way.

At the very least, Cleary seems to think that familiarity-based memory is the key to unlocking déjà vu. "Theories of familiarity-based recognition and the laboratory methods used to study it may be especially useful for elucidating the processes underlying déjà vu experiences."

Unfortunately, none of the research suggests past lives or secret machine domination of the world. But our own brains may prove to be far stranger than the fictions they've created.
Welcome to my Moon Base
More Articles All Articles
About