Chris Rollins
After it's conception and development during World War I, sonar is finally finding use in an unlikely medium: space. Astronauts on the International Space Station will soon be able to conduct experiments in zero gravity with no container contamination using beams of sound to control a sample.

Space-DRUMS, or the Space Dynamically Responding Ultrasonic Matrix System, uses a dodecahedron container armed with twenty ultrasonic beams that use sound to control the volume occupied by a sample inside. 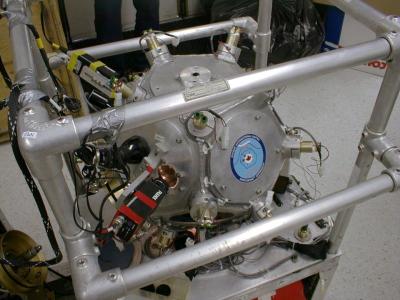 The SpaceDRUMS 12-sided reactor is able to keep a baseball-sized sample from touching its walls. Photo Credit: University of Bath.

"If you've ever been to a really loud rock concert and stood in front of the speakers, you can actually feel the force of the sound when they turn up the volume. Space-DRUMS works like this but on a much gentler scale – the beams of sound energy work like invisible fingers that gently push the sample into the centre of the container so that it doesn't touch the walls," said Professor Jacques Yves Guigné, a visiting professor in the Physics Department at the University of Bath. "Space-DRUMS uses 20 of these 'fingers of sound' arranged within a dodecahedron configured reactor such that the positions of the samples can be adjusted accurately."

Previously, in order to react two substances in space they needed to be contained physically, often in a rotating apparatus. Although the walls of the container can be cleaned, they provide a source of contamination because of the physical contact with the sample. Space-DRUMS uses a dodecahedron filled with argon gas and ultrasonic sound to isolate the sample. Argon is used because it is inert, so it doesn't react with the sample, and because it provides a medium to transfer sound energy from the walls to the sample.

The chamber is capable of holding combustion or heat synthesis reactions in a baseball-sized sphere in the center of the dodecahedron. Initial experiments will focus on creating chemical structures that are easier to produce in space, increasing scientists' understanding of certain exotic materials. Eventually, NASA hopes that astronauts will be able to produce unique materials with a high degree of purity that can be used for multiple applications.

The sonar technology used in the chamber was originally developed to map the sea floor more accurately. It uses multiple beams to provide more detailed information about the ocean floor. Guigné and his team simply adapted it for use in controlling a scientific sample.

Additionally, experiments requiring SpaceDRUMS can be controlled completely from the ground, as astronauts are required only to install the system and load the pellet carousels and debris traps. From then on, the entire system is automated. The pellet carousels are rotating containers that contain a sample before it is to be injected into the chamber. Before injection, the dodecahedron is cleared by creating a vacuum and then refilled with pure argon gas. The samples are then injected and controlled using sound waves. Once the reaction is finished, it is ejected into another sample carousel.

Professor Nick Pace, also on the team with Guigné, cited how exciting it was that SpaceDRUMS could be controlled from the ground: "The most exciting thing is that we can control the experiments from Earth. Our physics students will be able to use it as part of their final year projects – there aren't many universities that can offer their students a chance to conduct experiments in space!" 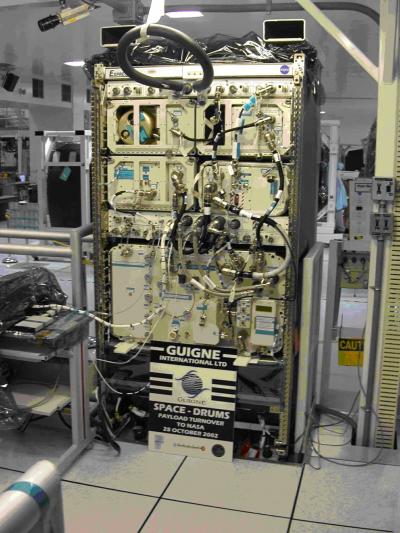 Mission Control: The control panel for SpaceDRUMS to fly on the International Space Station. Photo Credit: University of Bath.

SpaceDRUMS will also be used to study the physics of turbulence, which will aid in the study of atmospheric phenomena. Deputy Director of the Centre for Space, Atmospheric and Oceanic Sciences at Bath, Dr. Philippe Blondel explained: "Even with large computer clusters, the understanding of complex weather patterns is still limited. Using Space-DRUMS will help us to better understand the behavior of complex systems like hurricanes, their interaction with the atmosphere and hopefully anticipate where a hurricane can go next."

Regardless of the application, SpaceDRUMS is an exciting prospect and a huge accomplishment for the University of Bath. "Bath is at the forefront of this pioneering technology," Blondel said. "And we are really privileged by this opportunity to do these ground-breaking experiments in space."

References:
University of Bath Physics Department
NASA's SpaceDRUMS site
Welcome to my Moon Base
More Articles All Articles
About