Tommaso Dorigo
One of the nice things about the 2012 discovery of the Higgs boson is that the particle has been found at a very special spot - that is, with a very special mass. At 125 GeV, the Higgs boson has a significant probability to decay into a multitude of different final states, making the hunt for Higgs events entertaining and diverse.

Besides the two "golden" channels (photon pairs and four-lepton combinations) which were used for the discovery claim by ATLAS and CMS, the Higgs boson may decay into W boson pairs, b-quark pairs, tau-lepton pairs, Z-gamma pairs, or other combinations of particles which we have a chance to identify and reconstruct. And slowly but steadily CMS and ATLAS have indeed started to collect signals of these decay modes, acquiring more information on the Higgs boson properties and having a lot of fun in the proceedings.

Today I am flashing here the new result by CMS, which sought for decays of the Higgs boson to one photon and one "internally converted photon" yielding a lepton pair. The internal conversion process is one whereby the real particles emitted in the process is not the photon, which can anyway convert to a dilepton pair later on upon passing close to a heavy nucleus, but rather the two leptons directly. Using a Feynman diagram one can depict one such process as shown on the right - but beware, there are many such diagrams producing the same final state (for a complete set see the CMS paper). What matters for experimentalists is that the two leptons have a small invariant mass, and they originate from the primary interaction vertex; on the contrary, a "regular" conversion would originate from regions of the detector known to contain atomic nuclei in some abundance (like silicon detector layers).

The search requires the presence of a well-measured, energetic photon and two leptons. The invariant mass of the three particles must then be close to the 125 GeV of the decayed Higgs boson. Backgrounds from non-Higgs-production processes is large, so the search involves the fitting of the mass distribution to a smooth function plus a narrow Gaussian for the signal shape.

The data is divided in sub-categories depending on the nature of the leptons: events with two muons and a photon are shown for instance in the graph on the right. 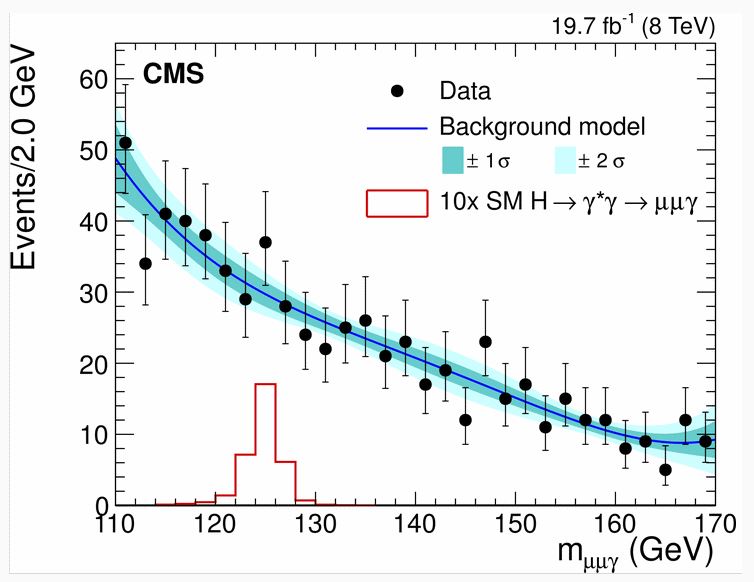 The figure shows how the signal one expects from a standard model Higgs is very small (the template shown in red has been magnified by a factor of ten to be more visible).  The data do not show a bump in the mass spectrum, and the fitting procedure extracts an upper limit on the amount of signal that the data allow. This is reported as μ<7.7 times the standard model prediction for the signal rate.

The limit on the μ ratio (rate in units of the SM prediction) is shown as a function of Higgs mass in the graph below. Of course, we are mostly interested in the 125 GeV region, but for completeness the search has been carried out in a wider region. And imagine if we found a bump somewhere else... That would definitely be interesting, too. In summary, CMS is not able to see this particular decay yet, but with more data it will eventually become accessible.
A Quantum Diaries Survivor
More Articles All Articles
About