Michael White
Will we ever have a set of standardized biochemical devices that synthetic biologists can snap together to make more complex systems? I'm skeptical that any single standardized biological device will hold up well under very different cellular contexts, without a lot of trial-and error modifications. We may successfully end up with a few really useful parts, but I'm betting that ultimately the catalog of useful and widely functional parts is going to be limited. 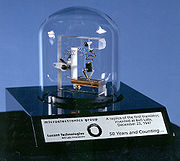 I think synthetic biology will always need customized parts or modules, even if those parts follow certain general design principles. But there are standardized systems that biologists should develop: standardized biochemical lathes for making custom parts. A biochemical lathe works like this: start with a basic scaffold (either an individual protein, or a simple genetic system) and use directed evolution (mutagenize your protein or system, and select better functioning versions) to transform that scaffold into the custom part you want.

So if a biologist comes along and says, "I want a receptor that binds TNT molecules and activates a MAPK pathway in response", you can take your generic MAPK-pathway-activating receptor and use directed evolution to create a receptor that binds TNT. A group at Duke University led by Homme Hellinga basically did this several years ago, but the key is to make a robust, user-friendly, versatile scaffold system. Once you build the system, it should be easy to make all sorts of custom parts.

Directed evolution is a powerful tool in the synthetic biology toolkit. Instead of one-size-fits-all parts that probably won't work in many contexts, let's have standardized part-making kits.