Michael White
In honor of the 150th anniversary of the publication of the Origin of Species, The Star has decided to trash Darwin.

No, they're not going creationist on us, but Stephen Marche argues that Genesis beats the Origin hands down as literature:

Genesis, it has to be said, is tough to beat as a piece of writing. It contains both the best of the wilderness, emerging over several generations from the greatest poets of the Judean desert, and the best of civilization, being polished by its proximity to the original cities in Iraq and Persia. Darwin did not have such good fortune in his time and place. He spent the most important years of his life collecting beetles in places where nobody spoke his native language. And he wrote The Origin of Species in the throes of illness.

You can spot the difference in the quality of the writing from the very first lines of the respective books. The first line of Genesis – "In the beginning God created the heaven and the Earth" – is simply the best sentence ever composed: strong, active, concise, clear, complete and yet turgid with hidden depths. Though not a single word is out of the ordinary, each word radiates with startling power on examination. "In the beginning" is an everyday expression, but in everyday speech, it always describes the beginning of something, a book or a road or a life. When we hear the phrase "in the beginning," we immediately ask "the beginning of what"? The beginning of Genesis is just The Beginning. The absence clarifies, more than words could, how high the stakes are.

Marche also trashes Darwin's characters (Lamarck is too one-dimensional), and argues that Genesis is full of vitality, while the Origin is full of death and extinction. He concludes that:

And so we are forced to the conclusion that, in almost every respect, Genesis is a better book than The Origin of Species, in the purity and intensity of its style, in its recognition of human realities. It's just that Genesis is a pack of lies that has served the cause of bafflement for millennia, while The Origin of Species is true and has done more to liberate us from ignorance than any other book. 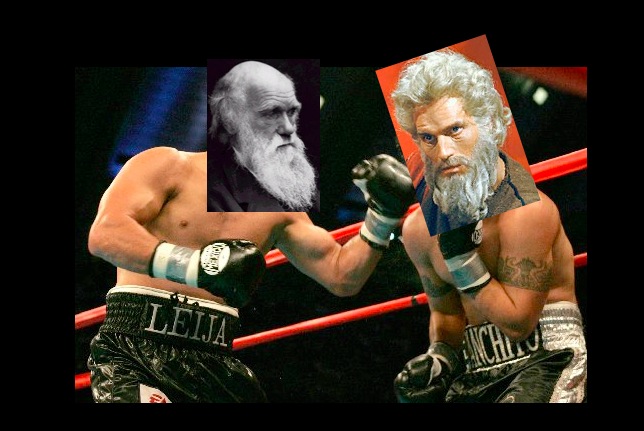 Earlier this month I argued that Darwin's book The Voyage of the Beagle is a great piece of writing. I'm not letting Marche smack down Darwin with impunity.

First, Darwin has one of the great ending lines of all time:

Thus, from the war of nature, from famine and death, the most exalted object which we are capable of conceiving, namely the production of the higher animals, directly follows. There is grandeur in this view of life, with its several powers, having been originally breathed into a few forms or into one; and that, whilst this planet has gone cycling on according to the fixed law of gravity, from so simple a beginning endless forms most beautiful and most wonderful have been, and are being evolved.

Compare this to the rather geriatric ending of Genesis after Joseph saves his family from famine:

So Joseph remained in Egypt, he and his father's household; and Joseph lived one hundred ten years... So Joseph made the Israelites swear, saying, "When God comes to you, you shall carry up my bones from here." And Joseph died, being one hundred ten years old; he was embalmed and placed in a coffin in Egypt.

I know what you're thinking - this comparison isn't fair - Marche wasn't talking about all of Genesis; he was talking about the creation story. But if we limit ourselves to the Genesis chapters involving Adam, we get the same result:

This is the list of the descendants of Adam. When God created humankind, he made them in the likeness of God. Male and female he created them, and he blessed them and names them "Humankind" when they were created. When Adam had lived one hundred thirty years, he became the father of a son in his likeness, according to his image, and named him Seth...[hundreds of years later, same chapter]...When Lamech had lived one hundred eighty-two years, he became the father of a son...

I'm sorry, but Darwin's 30+ pages on the varieties of domesticated pigeons is nowhere near as boring as this.

Plus, the Genesis author clearly got confused with the plot - Adam and Eve are both created in verse 27 of chapter 1. But once we move on to chapter 2, the plot repeats itself - Adam is created again in verse seven, and Eve makes a second debut in verse 22. In terms of structure, Genesis just can't compare with Darwin's tightly controlled, if slightly lengthy narrative.


Genesis does have one thing going for it, compared to the Origin - it's short. You can polish it off over your morning coffee, while a weekend at the beach probably won't be enough for the Origin.