The Voyage of the Beagle, by Charles Darwin


You might think that John Krakauer should be the least likely author that comes to mind as one reads a mid-19th century, 533-page tome on natural history by a forbidding, full-bearded Victorian gentleman. And yet, while reading The Voyage of the Beagle (which sits on my shelf flanked by the other ostensibly impenetrable books of the Harvard Classics series) I frequently was reminded of the extreme wilderness adventure stories of Krakauer's books and essays. Darwin describes, in deceptively easy prose, his experiences climbing mountains, throwing bolas with the South American cowboys of Pampas, how to attract the attention of a llama by lying on your back and flailing your limbs, escaping a city fallen under siege after one of South America's perennial revolutions, and engaging in a bizarre variant of the hammer throw in which, instead of a cast-iron sphere, you fling Galapagos iguanas, held by the tail. 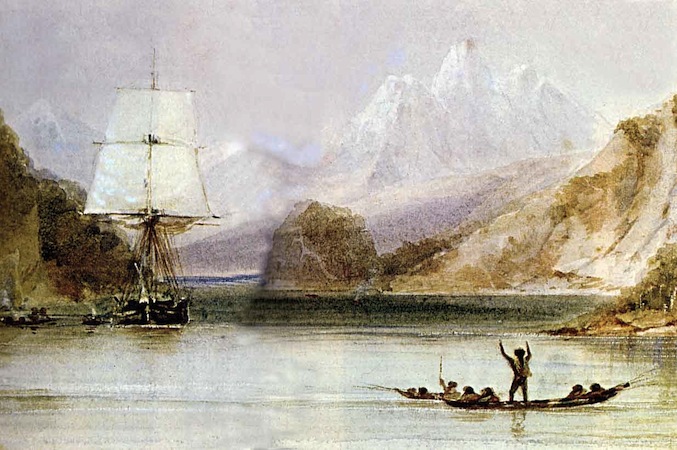 Darwin's 5-year adventures touring South America and the Pacific would have been a remarkable experience for anyone, but Darwin possessed several natural gifts which make his experiences (and his account of them) stand out. Physically, he was energetic and relentless in his drive to explore. Whenever the Beagle put in to port on the coast of South America, Darwin would rustle up a group of travel companions and head out into the country to explore, sometimes meeting up with the Beagle at another port hundreds of miles away. Darwin was extremely thorough and detail oriented. He was an observational genius, which was one key to his success as a scientist. He did not, however, get lost in a morass of detail; his book is evidence that, together with an eye for detail, he always kept the larger picture to the fore in his sharp, analytical mind. He tirelessly sought to understand how his observations fit into a coherent picture of biological and geological processes, the processes that have made the natural world as we find it.

Darwin's clear thinking was accompanied by a gift for clear writing. The prose in The Voyage is not as ornate as what we typically think of Victorian writing, and yet it is not simply functional. A fine example of how his clear thinking and clear writing come together is the following passage on fireflies:

I found that this insect emitted the most brilliant flashes when irritated: in the intervals, the abdominal rings were obscured. The flash was almost co-instantaneous in the two rings, but it was just perceptible first in the anterior one. The shining matter was fluid and very adhesive: little spots, where the skin had been torn, continued bright with a slight scintillation, whilst the uninjured parts were obscured. When the insect was decapitated the rings remained uninterruptedly bright, but not so brilliant as before: local irritation with a needle always increased the vividness of the light. The rings in one instance retained their luminous property nearly twenty-four hours after the death of the insect. From these facts it would appear probable, that the animal has only the power of concealing or extinguishing the light for short intervals, and that at other times the display is involuntary.

In a time before photography, Darwin's beautiful descriptions of the world beyond the British Isles explain why his writing was so popular in his own day, and why his books endure as some of the few original scientific writings that are still worth reading 150 years after they were published. Here is Darwin, in a passage worthy of Melville, describing a gale the ship experienced while making its way to the southern tip of South America, in one sense literally the edge of the world:

On the 13th the storm raged with its full fury: our horizon was narrowly limited by the sheets of spray borne by the wind. The sea looked ominous, like a dreary weaving plain with patches of drifted snow: whilst the ship laboured heavily, the albatross glided with its expanded wings right up the wind.

Or consider the juxtaposition of tranquil natural beauty with death in this passage, Darwin's description of a visit to a salt lake on one of the Galapagos islands:

The lake is quite circular, and is fringed with a border of bright green succulent plants; the almost precipitous walls of the crater are clothed with wood, so that the scene was altogether picturesque and curious. A few years since, the sailors belonging to a sealing-vessel murdered their captain in this quiet spot; and we saw his skull lying among the bushes.

Above all else, The Voyage of the Beagle is a great read.

It is also about evolution. While it is difficult, from this book, to get a good take on how mature Darwin's ideas about natural selection were at the time of his travels (1831-1836), (The Voyage of the Beagle was published as a stand-alone book first in 1845, and then in its most famous form, and with its present title, in 1860, after On the Origin of Species), as you read The Voyage, Darwin is clearly preparing the way for evolution. We read echoes of Malthus, whose ideas about the limits of population expansion provided Darwin with a major clue to natural selection; we read about the great geological changes that raised sea beds into mountains and rendered species of giant quadrupeds extinct; we read of the puzzle of the unique species of the Galapagos islands, which volcanically arose out of an empty ocean, long after the putative acts of creation took place elsewhere in the world. "No fact in the long history of the world is so startling as the wide and repeated extermination of its inhabitants," Darwin wrote, and in his day, this really was startling. It is perhaps less so in ours, with our endangered species' lists, warnings of catastrophic climate change, and our obsession with the extinct world of the dinosaurs.

In this book, Darwin, in his chapter on the Galapagos, poses the key question which led him to discover evolution by natural selection:

Why, on these small points of land, which within a late geological period must have been covered by the ocean, which are formed by basaltic lava, and therefore differ in geological character from the American continent, and which are placed under a peculiar climate, - why were their aboriginal inhabitants, associated, I may add, in different proportions both in kind and number from those on the continent, and therefore acting on each other in a different manner - why were they created on American types of organization?

Darwin's eye for larger patterns is here highlighting some of the most important evidence for life's evolutionary past - the geographical distribution of species, which is only explained coherently, in a non-arbitrary way, by evolution.

Humans and their interactions don't escape Darwin's observations in The Voyage of the Beagle - this is also a book of anthropology. While Darwin held views of 'savages' typical of his day, racist views which sometimes make the modern reader cringe, he was a keen observer of human behavior. The Fuegians, living in the "Land of Fire" on the southern edge of the world, apparently seemed to Darwin like outcasts from hell, possessed of extremely primitive clothing and technology, and yet eking out an existence in an inhospitable climate. Darwin appears surprised that these people were able to survive at all:

Although such reflections [on life under such awful conditions] must at first seize on the mind, yet we may feel sure that they are partly erroneous. There is no reason to believe that the Fuegians decrease in number; therefore we must suppose that they enjoy a sufficient share of happiness, of whatever kind it may be, to render life worth having.

By contrast, the naked Tahitians lived in paradise, "the island to which every voyager has offered up his tribute of imagination."

There is much more in this book - about the rodeo skills of the Gauchos, the genocidal campaigns against the South American natives (and the retaliatory massacres), the influence of Europeans on the Pacific Islanders, and hundreds of pages of fascinating natural history, put together into a broad narrative about how the world came to be. If you read only one of Darwin's book in this anniversary year, The Voyage of the Beagle will give you Darwin at his best - both as a scientist, and as writer.


Because the page numbers vary so much from edition to edition, I haven't included them with my quotes. To find the source passages, you can search this edition at Google Books.

Join me next month on December 13th for the Sunday Science Book Club. We'll be discussing I am a Strange Loop, Doug Hofstadter's second take on the idea he originally introduced in his acclaimed Gödel, Escher, Bach.

Following that, here is the Sunday Science Book Club lineup: January 10th, Richard Holmes' outstanding Age of Wonder, and on February 14th, Mitchell Waldrop's Complexity, about the ideas behind the creation of the Santa Fe Institute.

Read the book and join me with your comments, or just show up and see if the book sparks your interest.