Show Me The Science Month Day 19

Some fish have two sets of teeth: oral teeth, set towards the front of the mouth (like ours), and so-called pharyngeal teeth, set far back in in the throat in a strange, second set of jaws. Based on what we learn from the fossils of ancient jawless fish, it appears that teeth first appeared on these deep pharyngeal jaws. So how did most vertebrates come to have the more common set of oral teeth? A group of scientists based in Georgia and Tennessee used paleontology and modern genetics to show that tweaks to an ancient gene regulatory network enabled the evolution of  oral cavity teeth possessed by most vertebrates. 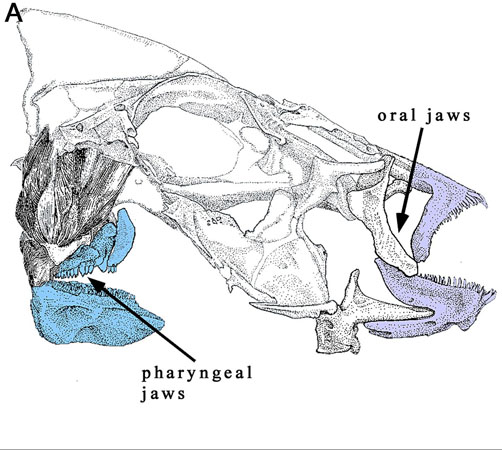 The scientists turned to African cichlid fish to understand what genes might have been involved in the evolution of oral teeth. Cichlids have both pharyngeal teeth and oral teeth, and the main question the researchers asked was whether pharyngeal and oral teeth are produced by the same genetic regulatory network. If they are, that would suggest that oral teeth evolved by co-opting a previously existing set of genes and using them for a new function.

From prior work on teeth, the researchers knew which genes were involved in producing oral teeth, a set of genes that is largely the same in tooth production in both fish and mammals. By measuring gene expression in the developing jaws of these fish, the scientists found that pharyngeal teeth, with a few differences, use almost all of the genes required for the development of oral teeth. In other words, both pharyngeal and oral teeth are produced by the same fundamental genetic network, with a few tweaks in each case - teeth in all vertebrates are produced by minor genetic variations on the same fundamental theme. Not really a surprise, but it is one more example of how simple it is for genetic networks regulating one function get co-opted to do something new.

In case you missed it, check out Hank's contribution to Day 19 of Show Me The Science Month, The Evolution of Evolution.

Join me tomorrow, here at Adaptive Complexity, for Day 20 (and a much earlier entry, I promise) of 30 Days of Evolution Blogging. Evolution as a science is alive and well. Each day I will blog about a paper related to evolution published in 2009.

Are you a blogger and want to join in? Here's how.
Adaptive Complexity
More Articles All Articles
About