Michael White
The Pacific Region of the American Association for the Advancement of Science (AAAS, "the world's largest general scientific society") includes some of the best universities in the world, located on the Pacific coast of the US. So it was with great excitement that I flew out to San Francisco to attend the 90th Pacific Regional Meeting of the AAAS at San Francisco State University (SFSU), where I was slated to give a talk on science blogging.

I landed Sunday afternoon and stepped out of the airport into the bright, balmy 70-degree weather (a welcome change from the sultry Mississippi Valley). "This is going to be great," I was thinking. What could be better than spending a few days in a great city, and meeting with scientists gathered from all over the Pacific coast?

I met up with Hank Campbell, the founder of Scientific Bloggging and the organizer of the meeting's syposium on communicating science to the public. We drove over to the SFSU campus. As we arrived, my optimism about the meeting encountered the first of several crushing and ultimately fatal blows: San Francisco is freezing. There are many of us, I'm sure of it, living outside of the Golden State, who suffer from the delusion that all of the California coast is some Mediterraneanesque paradise, always sunny, the temperature permanently at some moderate thermal equilibrium situated at a pleasant interval from the human body's optimum.

I've been to California multiple times before, but never to San Francisco, and my St. Louis summer attire offered no protection from the gray, bone-sogging chill that engulfed the Bay Area. San Francisco, in the unpleasant lower range of the 60's, in the middle of the day, in August. I had no idea such a thing was possible. (Neither did Mark Twain.)

San Francisco State University was colorful (like a lot of houses in the area - I always thought that the colorful Frisco suburbs I see in pictures were part of a California culture of sun celebration; now I know it's to keep out the soul-sucking effects of the weather), but the campus seemed a little deserted. Hank and I made our way towards the meeting facilities at Hensill Hall, confounded at one point by a sign saying 'Pacific AAAS Meeting' with arrows pointing in both directions. (Hank immediately started looking for a marker, so he could label one arrow 'correlation' and the other 'causation'.)

Along the way, we noticed that SFSU has an innovative evolutionary biology program:

We finally arrived at Hensill Hall, where most of the day's sessions were supposed to take place, at which point the day got steadily worse. For one thing, the coffee wasn't brewed yet. And much of the meeting was happening within classrooms in a lab building. This meant no place to relax and talk with other conference attendees (remember, outside it was freezing), or even to take a break and check some email. The effect was that people would make tracks as quickly as possible after the sessions.

There were few people around to attend the meeting anyway. The conference itself, for some reason, inscrutable to most of us but probably logical in some alternate universe, had been scheduled to cover more than a week, with a few dead, session-free days during that time. Typically scientific conferences are set up to be short and intense, because it has to be worth your while to fly out to them. Nobody has time to come in from hundreds of miles away for a week of occasional sessions, and the result was that, instead of getting attendees from all over the Pacific AAAS Region, you mostly had local people. (I've got nothing against the locals except their weather.) Those who did come from out of town stayed only for a short while and then checked out. The meeting didn't do much to bring people together - which is what science meetings are supposed to be all about.

Not being from the area, I wasn't too excited about most of the sessions that morning (a symposium on San Francisco Bay ecology, and one on conservation in the Golden Gate National Recreation Area), so Hank and I went to check out the room for our symposium, "Good Science is Only Part of the Job: Communicating Science to the Public." Of course, since communicating science to the public is such a core part of the AAAS mission, we were sure that our session would be given top billing in a large auditorium. After all, Hank had brought in some top-notch speakers: Greg Critser, author of multiple books, and freelance journalist whose reporting has appeared in just about every major newspaper; Genie Scott, the globe-trotting head of the National Center for Science Education; and UC Berkeley biologist Michael Eisen, a genomics big-shot and co-founder of the Public Library of Science (and an extremely nice guy). And then Hank brought me in too, just to keep it real of course.

It turned out that our room was underground in the basement. Not only was it underground, but, in order to reach the room, all attendees would have to do a long walk of shame:

Yes, that's me down there, welcoming people to the symposium.

We were told that the building had been recently renovated, probably to enhance its aged, hospital/prison cafeteria/1970's Greyhound bus station look. The building was designed to remind you of the weather outside, by constantly pushing cold air through the vents at a disorientingly high flow rate, no matter where you set the switch on the little thing on the wall cleverly disguised to look like a thermostat.

The people who built the building were probably the same people that build those snoop-proof, high-security, electromagnetic field-deflecting rooms deep inside US embassies where visiting executive branch officials hold their covert meetings with CIA station chiefs. No wireless or cell phone (and probably even AM radio) signal reached our basement classroom, making it a less than ideal place to get some work done during the down time before our symposium.

Lunch time rolled around, so Hank and I set out in search of food. Meal arrangements weren't part of the conference, but our program helpfully noted that the Cesar Chavez Student Center offered "a wide selection of eateries, each with their unique cuisine." (Cesar Chavez is a big deal at SFSU, as I gathered from the multiple murals around the campus.) At the Student Center, nobody was there for lunch yet. In fact, nobody appeared to even be cooking anything, and, come to think of it, nobody appeared to be around attending any classes either.

That's when I learned about California's creatively insane solution to its budget disaster: furlough days. To save money, employees of the state of California and its universities, apparently considered in the same category as incarcerated felons, get furloughed on random days, and everything at the university shuts down. Monday happened to be a furlough day at SFSU, and so the primary conference meal option was unavailable.

Back at Hensill Hall, Hank and I were informed that the Biology Stockroom was offering Angus burgers. (This kind of thing would produce a significant non-zero probability of cranial explosions at my university's Environmental Health&Safety office. Which I would love to see.) How do you cook an Angus burger in a Biology Stockroom, you're wondering? Easy: take it out of the freezer and cook it in the microwave for 3 minutes.

Yep, you read that right. Hank flew me out from Saint Louis to attend the annual meeting of the largest AAAS region, and we ate a microwave burger for lunch. Accompanied by Doritos and a Coke (Doritos not shown):

The symposium session went well. (Stay tuned for the video version, to be posted soon.) Mike Eisen, who spoke about the demise of all scientific journals, including the one published by the sponsors of this conference, concluded his talk with a video of the word 'Science' (as in Science magazine), written in the sand on a beach and being washed away by the tide.

In spite of the warmth of the discussion following Eisen's talk, the meeting wrapped up with Genie Scott nearly succumbing to the building's overpowered air circulation system. Hank chivalrously offered up his suit jacket, and Genie was able to finish her excellent talk.

Our work was done for the day, and it was time to warm up with some booze. Hank had managed to secure some Golden Tickets to Harry's Bar:

There we celebrated, speakers, bloggers, PLoS people, and a crew from the NCSE, by enjoying drinks from some exclusives designed just for the occasion (although someone still needs to explain to me how the Science Ninja drinks itself): 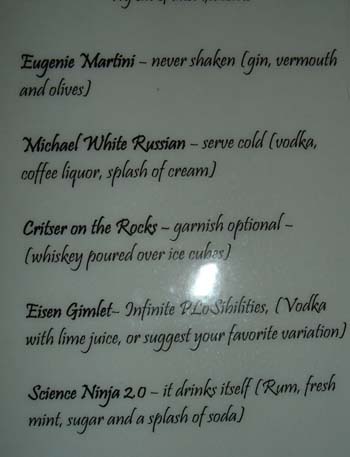 The AAAS meeting is still going on. After attending an impressive session on "evolutionary innovations" (stay tuned for the run down), my time was done. I skipped town Wednesday morning, missing an intriguing session on Near Earth Object (NEO - an important acronym) avoidance (including a talk by someone at Google who is apparently designing a transponder gravity tractor spacecraft for use in asteroid deflection campaigns). I've got nothing against asteroid avoidance, in fact I think it's in all of our best interests to avoid asteroids, but now I'm worried that Google really is planning to take over the universe.

As I flew off into the sunset (actually, it was into a classic Midwestern squall that caused my flight to be diverted from Chicago to Detroit), I mulled over what I had learned at the conference. Two lessons stood out: I am never living in San Francisco, and I am never attending another regional AAAS conference. (Although I'd be happy to go back to Harry's Bar for another Science Ninja).