Michael White
Photosynthesizing sea slugs take 'you are what you eat' to an extreme: by eating photosynthesizing algae, these "solar-powered" sea slugs are able to live off photosynthesis for months. How does this work? Is this just a straightforward case of symbiosis between algae and sea slugs? 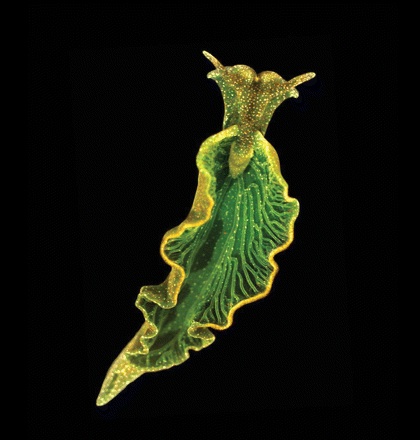 It turns out that this is not a case of symbiosis: this is a case of the amazing and ubiquitous power of viruses to dramatically reshape the genetic landscape.

Cheap, powerful sequencing has enabled scientists to sample the viral world like never before. Our understanding of marine viruses, in particular, has exploded as researchers have sequenced whatever they can find in samples of seawater.

These sequencing studies have discovered "cyanophages" - viruses that infect cyanobacteria, bacteria which do much of the world's photosynthesis. These cyanophages very commonly carry photosynthesis genes, which means that opportunities for abound for a marine organism, which is normally incapable of photosynthesis, to pick the genes necessary to maintain chloroplasts, the cellular entities that enable plants, algae, and cyanobacteria to generate energy from sunlight.

There is, however, a high barrier to overcome before an organism can pick up genes from a bacterial virus. Typically, bacterial viruses don't infect eukaryotes, and eukaryotic viruses don't infect bacteria, due to the fact that viruses have to be niche players: they need to specialize, when it comes to manipulating cellular machinery for their own reproduction. They focus in on the unique features of their targets - in a way, they parallel computer viruses, which in most cases are OS-specific.

The most amazing example of virus-mediated gene transfer is the case of the sea slugs that produce green energy: sea slugs which eat photosynthesizing algae, and then live off photosynthesis for months. As far as I know, these are the only animals that are capable of photosynthesis, and, incredibly, there are multiple sea slug species that do this.

What happens is this: sea slugs eat algae, and, in a process named kleptoplasty, take up the algal chloroplasts by absorption though the gut. The sea slugs then use those stolen chloroplasts to carry out photosynthesis.

However, there's a catch: you can't maintain chloroplasts unless your own genome encodes chloroplast genes. Chloroplasts, being descendants of ancient bacterial symbionts, do have their own genomes, but their genomes do not encode all of the genes necessary for chloroplast maintenance: some contribution from the host is required. In the case of plants, algae, and cyanobacteria (the organisms we typically associate with photosynthesis), key chloroplast genes are found in the nuclear genome of the host.

So what about the sea slug? Animals do not carry any genes for photosynthesis. Or do they? It turns out that photosynthesizing sea slugs have managed to pick up some chloroplast genes (as discovered by sequencing portions of sea slug genomes), and these chloroplast genes show, in their surrounding DNA sequence, the hallmarks of viral transfer.

Furthermore, viral particles have been detected in both the algal chloroplasts and the cells of the sea slugs, which means that these sea slugs are constantly exposed to an opportunity for gene transfer. A few lucky gene swaps occurring over the course of a few million years of chloroplast virus exposure was apparently enough to produce sea slugs capable of photosynthesis. It's not clear what kind of viruses these are, but it's not unreasonable to suppose that they are a particular niche virus species that has gained the capability to infect both algal chloroplasts and sea slug cells.

Photosynthesizing sea slugs are just one example of the amazing gene-shuffling power of viruses. Some of the most important tumor-promoting genes (at least scientifically important, if not always clinically important), like Src, Ras, and Myc, were first discovered in viruses. These genes are not viral genes; they originated in animals, but were subsequently picked up by viruses. Since viruses shuffle in and out of genomes so frequently, it's no surprise that, over millions of years, they've had a big impact on the world's genetic landscape.
For more, check out this review article.


UPDATE: I don't know what I was thinking as I wrote this, but Adam kindly reminded me that cyanobacteria don't have chloroplasts. Chloroplasts are descended from photosynthesizing bacteria that in some respects probably resembled today's cyanobacteria.