Reproduction involves some tricky trade-offs for all species, and anyone who has watched a David Attenborough film knows that you can find a wide range of reproductive strategies in nature. Some animals spend their energy producing hundreds or thousands of offspring and leave them to fend for themselves. Others, like whales and humans, produce only a few offspring but expend an enormous amount of resources trying to give those offspring the best chance in life possible.

Plants face a similar trade-off. They can choose to produce many energetically cheap small seeds, or fewer, more expensive large seeds. A recent paper in PLoS Genetics takes a look at one of the genes involved in seed size evolution. They study naturally-occurring genetic variation in found in this gene, and the relationship of that genetic variation to seed size in the domesticated tomato and its wild relatives. 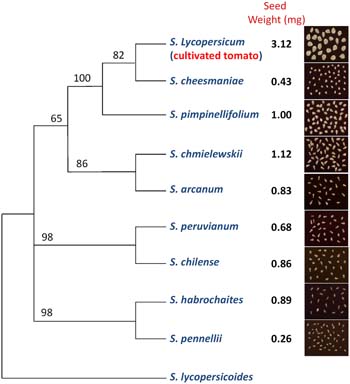 Variation in Seed Size, Figure 1 from Orsi and Tanksley

The wild relatives of the tomato show a range of seed sizes, from 0.2 milligrams to more than 1 milligram. Domesticated tomatoes, by contrast, have very large seeds, at least compared to the wild species: 3.1 milligrams on average. The researchers, based at Cornell university, were interested in understanding what kind of genetic change can produce those differences in the seeds of these closely related plants.

Studies of genetic variation, like this one, are examining the raw material of evolution. Genetic variation is also the raw material that humans work with when they domesticate a species like the tomato. In the case of the tomato and its relatives, we're interested in knowing how is it possible for different seed sizes to evolve? Can you change just one gene to make bigger or smaller seeds, or do you have to change many genes? Plant species encountering a new environment, such as a drought, a new species of grazing animal, or changing soil conditions, may need to adapt quickly, or lose out in the survival game. Changing to a new seed-producing strategy (such as more cheap, small seeds under drought conditions) can be the key to better survival in a new environment.

To find a gene with a large effect on seed size, the researchers crossed a large-seed domesticated tomato with a small-seed wild relative. The results of this cross-species breeding experiment led them to one gene with a major effect on seed size. This gene encodes a membrane-embedded transporter that shuttles chemicals in and out of the cells or between cellular compartments. We don't know exactly what chemical this particular transporter transports, but the Cornell group found that the gene does have a large effect on seed size. When you knock this gene out, tomatoes lose 30% of their seed size, and cross-breeding between large-seed and small seed plants show that this gene is responsible for much of the difference in seed size between the two species. (To get technical, the crosses actually only show that the locus containing this gene is involved in the variation, but the researchers narrowed down the locus to a region that contained only the transporter gene.)

The bottom line is that differences between the wild species version of this gene and the domesticated tomato version are responsible for much of the difference in seed size. The wild species has variant DNA elements in the gene itself that make it suited for producing small seeds, while the domesticated tomato has DNA variants making its version of the gene able to produce large seeds.

So what about seeds in other other plants? The researchers found evidence that this transporter gene may also play a role in seed size evolution in other plants. This study is just a first step, and pinning down the ability of this gene to influence seed size in other plants will take further experiments. What the researchers did discover was a clear case of natural genetic variation controlling the size of seeds, variation for evolution (or plant breeders) to work on when larger or smaller seed sizes are needed to adapt to a new environment.

Join me tomorrow for day four of Show Me the Science month. Evolution as a science is alive and well. Each day I will blog about a paper related to evolution published in 2009.
Adaptive Complexity
More Articles All Articles
About