When the second working group of the Intergovernmental Panel on Climate Change released its fifth report March 31, its unexpected emphasis on the positive may have been more than a reflection of better efforts to deal with the impacts of a warming planet. It may also have been smart marketing strategy.

“We definitely face challenges, but understanding those challenges and tackling them creatively can make climate-change adaptation an important way to help build a more vibrant world in the near-term and beyond," he said.

Newsrooms around the world exhaled a unanimous gasp of surprise at the slightly less apocalyptic tone. Headlines such as these demonstrated journalists’ astonishment:

The IPCC’s change in tone may be somewhat deliberate. Field, in an interview with NPR’s Geoff Brumfiel, suggested that the panel is at least mindful of its reputation.

“Historically we've been the doom and gloom group,” Field said, “but one of the things that's really important about the new report is that I believe that we've turned a corner.”

Marketing research has long suggested that the form in which a message is communicated, called framing, plays an important role in peoples’ responses to that message. 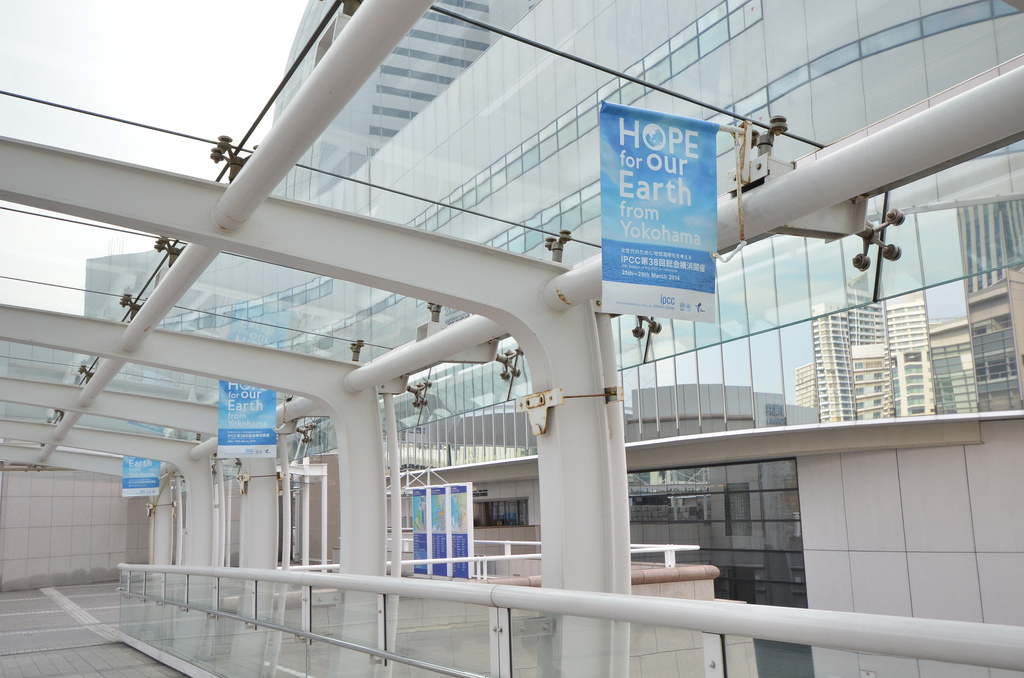 The Pacifico Yokohama Conference Center in Japan hosted the latest meeting of the Intergovernmental Panel on Climate Change. Credit: IPCC. All rights reserved.

An influential 1990 paper by researchers at New York University and the University of Chicago’s Graduate Business School published in the Journal of Marketing Research proposed a provocative relationship between these framing dimensions and the level of preexisting engagement a person had with an issue.

The opposite was true for those with low involvement: positive framing was more persuasive.

The authors suggested issue advertisements might best be framed to match expectations of audience involvement. Thus, “when the audience is likely to have a much more casual interest in the ad issue, positively framed messages might be advisable.”

The authors of the IPCC report are no doubt aware that although emotions run high on all sides of climate change arguments, the vast majority thinks little about climate change on a day-to-day basis; they’re “low-involvement” message recipients.

If the IPCC recognizes this fact, it may also have recognized that a more hopeful, solution-oriented message will have more resonance with the average citizen.

The new report points out that a number of governments – especially at the local level – are already taking steps to reduce citizens’ vulnerability to the effects of climate change.

These strategies are still being carried out in patchwork fashion, often only in the face of an immediate crisis. But where they are occurring, residents tend to be on board. The IPCC has an inherent interest in encouraging such efforts, no matter how piecemeal.

The 1990 framing study was exploratory in nature and only demonstrated correlation, but subsequent work picked up on its example. Message framing research over the last two decades has expanded well beyond the positive/negative and low/high involvement dynamics. The effects of message framing have been of great interest, for instance, in the field of public health.

Some have also begun to investigate these phenomena in relation to environmental issues.

One study from 2010 looked at negative and positive frames for delivering messages about the risks of climate change. It found that positive framing led subjects to an increased perception of the severity of climate change, as well greater favorability toward mitigation efforts. However, these favorable attitudes were offset by lower information recall.

On the flip side, a researcher at the University of Ohio in 2001 found that negative framing could increase the perceived importance of the information in the message.

All of this suggests a tradeoff when it comes to messaging on climate change. Sides have already been chosen among the passionate, who probably won’t budge much no matter what data the IPCC presents.

The vast middle ground, however, still sits unclaimed. Climate experts are likely to have better luck working within that population, for whom the issue does not evoke strong interest one way or another. And positive framing is liable to be more convincing to these people.

The caveat, though, is that it could come at the cost of better information retention. That is, people could be more willing to see climate change as real, but might not be much better informed about the nuances.

If the IPCC report was aimed solely at high-level policy experts, positive framing might not be that helpful. But since national and international coordination has gotten so bogged down, the real movement is indeed at the local grassroots level. By accident or by design, the IPCC’s new tone may be better suited to spurring action where it has the most chance of success.