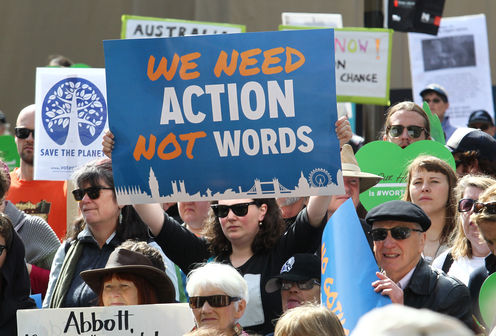 But which words will lead to action? Credit: EPA

By James Painter, University of Oxford

Each of the 125 leaders attending the New York climate summit this week has been given four minutes to speak to the world. They (or their aides) may well have dipped into the climate literature to add scientific ballast to their speeches. But they may not be as familiar with the vast array of academic studies on effective communication about climate change.

They should be. If world leaders and climate advocates really want to improve the chances of mobilizing political will and citizen action behind a new deal, they will need to think carefully about what sort of key messages actually work.

Clearly there is a balance to strike between doom-ridden messages and “bright-side” opportunities, and uncertainties around the science and the expected effects of climate change must be factored in too.

Part of their challenge is that the world’s media need – and use – overarching narratives to describe the climate change “mega-story”. Alarming stories of more famine, sea level rises, floods, hurricanes and droughts are easy ones to grab attention.

This “disaster” story is by far the most common one in the coverage of climate change, as shown by several studies. At times, this “alarming” story morphs into the more “alarmist” language of catastrophe, calamity or doom.

A new study I carried out for the Reuters Institute for the Study of Journalism shows that in the television reporting of the three recent blockbuster reports by the Intergovernmental Panel on Climate Change (IPCC), the disaster narrative was still by far the most common in the six countries it examined.

The study examined the coverage on television, which is still in most countries the most used and trusted source of information for news in general, and for news about science.

For instance, just one evening news bulletin often enjoys far more audience that the circulation of a national newspaper. The channels monitored in the study have a combined audience of about 50 million viewers.

It is not surprising that disaster should be more common than the other “frames” or narratives the study surveyed (uncertainty, opportunity and explicit risk). The IPCC reports were full of the adverse impacts from runaway greenhouse gas emissions, which make for compelling news.

But it is surprising that the risk narrative hardly got a look in. In the press release and communication efforts around the second report released early this year, the IPCC went to considerable lengths to portray the climate change challenge as one of “risk management”.

The co-chair of the working group responsible for the report, climate scientist Chris Field, spoke repeatedly and eloquently about the need, in the face of uncertainty, to weigh up the risks of possible outcomes.

Part of the explanation is that television news needs pictures to tell stories and is better at telling stories than dealing with issues. The disaster frame lends itself to a strong narrative, whereas risk is more of an issue than a story.

Why is this important? Doom-laden depictions of climate change are ubiquitous in the media. But results from focus groups show that such disaster narratives are good at attracting attention, but not so good at motivating genuine personal engagement or behaviour change.

Some scientists are really tackling this problem head on. An inquiry this year on communicating climate science led by Professor Chris Rapley at the UCL spelled it out: strong appeals to fear are unlikely to avert danger and can generate defensive avoidance (“this is too scary to think about”) or worries of being pressured or constricted (“they are trying to manipulate me”).

As the report says, initial states of worry and anxiety can change over time to numbness, desensitization and disengagement from the issue altogether.

But nor should one jump into overdoing positive narratives about climate change as the antidote to all the disaster narratives. A balance needs to be struck.

Many politicians and climate reports now talk about risk, which works for some audiences – particularly in the business sector – who deal every day with assessing investment, insurance and other types of uncertain outcomes.

They were clearly the target audience for a groundbreaking report out in June this year called Risky Business, which used a risk management perspective to lay out the threat to agriculture, energy and coastal real estate in the US.

One of the authors was the former Republican treasury secretary Hank Paulson. As he explained: “taking a cautiously conservative stance – that is, waiting for more information before acting – is actually taking a very radical risk”.

As the Columbia Journalism Review noted, the report helped to shift the nature of the climate change story in the media. It became a business story on the business pages, reaching a new and powerful audience.

James Painter, Head of the Journalism Fellowship Programme at University of Oxford, receives funding from The Grantham Research Institute on Climate Change and the Environment at the London School of Economics and Political Science, and the Norwegian Environment Ministry.