Hank Campbell
Why is Homo neanderthalensis gone while Homo sapiens have bent the world to our will?

Cro-Magnon became a common name for homo sapiens when the first fossil to be recognized as belonging to our own species was discovered in 1868 at the Cro-Magnon archaeological site outside Les Eyzies, France. Homo neanderthalensis, commonly called Neanderthals, were identified from a find in the west German Neandertal Valley 12 years earlier. The narrative immediately sprang up that they were precursor 'cave men' to us in a straight evolutionary line but now it is recognized that they were a separate branch.

In the 20th century extinction hypotheses for the end of Neanderthals gave way to climate shifts but that is tricky because 90,000 of every 100,000 years in recent geological history have been ice ages, so Neanderthals survived at least three worse than the one they died during. Then there was speculation that they never went extinct at all, but just became part of us.

They died off too quickly for either of those to be plausible, which leaves the thing we do best; competition and war.

A new paper attempts to do what many have tried in the past; numerically quantify the drivers of Neanderthal extinction. Like all simulators, they use equations to create scenarios for how both Neanderthals and Homo sapiens as the landscape began to emerge from the last ice age. Since there was no agriculture, they competed for the same limited food resources. Like any good story, a few fell in love with each and had happy or perhaps tragic lives, but because we know how the scenario ends - Neanderthal was doomed - there are at least some reasonable parameters. And their model says modern man out-competed neanderthals. 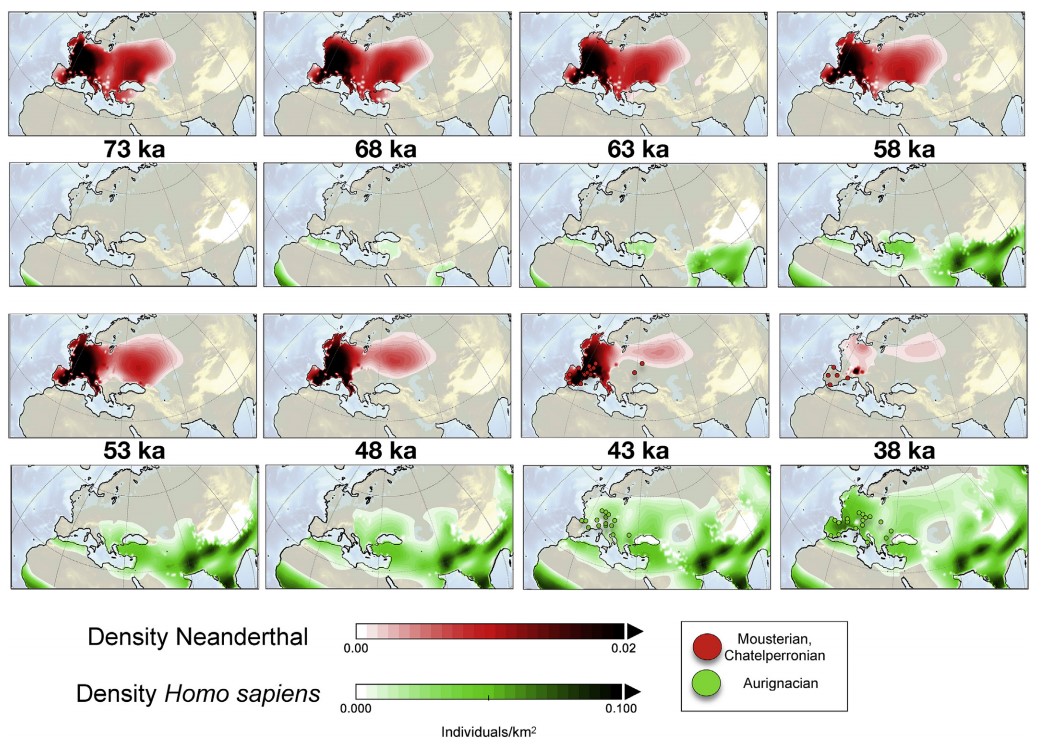 The decline is too rapid to be anything but getting beat.

There could be other factors, of course. Europe gave the New World smallpox and the New World sent back syphilis. It is possible that neanderthals were wiped out by some kind of viral plague, the same way bees get wiped out by varroa mites and cause Colony Collapse Disorder as it spreads through managed hives.

But resource competition seems most likely, according to their simulation, and that would mean better tools. If modern man had better tools for hunting, they also had better tools for fighting.  There are few instances were man or any other animal found itself hungry and did not fight for scarce food. While total war is not an evolutionary mandate, struggle is.

It could be that the first species we sent into extinction was our biological cousin.
Science 2.0
More Articles All Articles
About