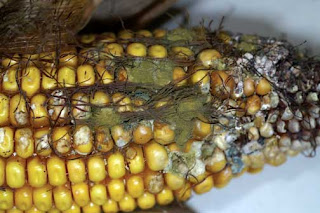 There is a trend in the organic food industry with the potential to damage the entire Organic brand.  This risk was highlighted by a recent Canadian Food Inspection Authority decision to institute mandatory mycotoxin screening of corn imported from India.

This began after CFIA found dangerous levels of aflatoxin in shipments intended for organic chicken feed.

A little background on aflatoxin. It is one of the most toxic and carcinogenic chemicals known.  It is the third highest cause of cancer death world wide. Aflatoxin is a serious threat to health.  So - highly toxic feed transported half way around the world seems seriously “off-brand” for organic. It should. Many consumers willingly pay a price premium based on their belief that organic means safer/better*.   That trust is being seriously violated by the phenomenon behind the recent Canadian incidents.

A logical question is, “why would Canadians import corn from India when Canadian farmers are fully capable of producing that crop.” The answer is that Canadian production of organic corn (and other organic grains) has not kept up with demand. The same is true for the U.S. This shortfall has induced some animal producers and human food manufacturers to tap distant sources.  Why the gap?

Some of this is related to the three-year transition required for a farm to qualify as organic, but much stems from the fact that farmers are not being offered a high enough price premium for organic to justify the logistical, yield and risk-based costs of growing under the organic rules. It simply does not make economic sense for them to make that commitment when they know that the way they are normally farming is perfectly reasonable.

When buyers then choose to source their organic supplies from low-cost, off-shore sources, it only serves to entrench those inadequate premiums for the local producers.  The higher prices that consumers are willing to pay for organic are not being sufficiently passed along to the farmers in their own region.

This organic off-shoring phenomenon is much broader than some corn for chickens in Canada.  Much of the recent growth in organic sales has been outside of its traditional niche of fresh fruits and vegetables.  This growth has been in meat, dairy and packaged foods, all of which involve non-perishable ingredients which, like that Indian feed corn, can be cost-effectively shipped from around the world to Canada or other rich countries.  These importable ingredients include animal feeds, but also cereal grains/flours; dried milk, fruit and vegetable products; spices, nuts; fruit juice concentrates and frozen items.

There can be mycotoxin issues with many of these ingredients, but in the rich world we have systems that manage that risk quite well.  If you go to the low cost market, there is no such guarantee. Andrew Porterfield has recently described enhanced pesticide risks associated with this same import trend.

Importation as such is not the problem.  There are many completely logical and safe reasons for international food trade from reputable sources.  The problem is that some of this organic-supply-driven-sourcing exposes us to crop production in regions that don’t have the basic environmental and food safety protections that we who live in the rich world normally have the privilege to assume.  Keeping fungal toxins out of the food supply requires careful attention to pest control, careful harvesting and proper storage.

It requires monitoring and rejection protocols.  These precautions are well integrated into developed world food systems. When companies go outside of the mainstream supply to cheaply fulfill organic or non-GMO demand, these safety features are often missing.  How often does that lead to dangerous contamination as in the Indian corn incident?  No one knows because there had been no routine testing of imports until this recent Canadian decision to look at one category.  Corn is certainly not the only ingredient with the potential for mycotoxin issues.

There is nothing in the organic rules to address these risks.  In fact the organic limitations on insecticide and biotech options increase the risk of the pest damage that initiates contamination.

The aflatoxin incident and policy change in Canada attracted very little attention in the North American press.  Perhaps it would be different if/when someone finds mycotoxin contamination in an organic human food ingredient.  It is tragic that this danger is still prevalent in many parts of the world, but it is absurd to be importing it so that it becomes a “rich world problem.”  If food companies are unwilling to pay farmers for the true cost of organic or non-GMO production, they should not be profiting from a consumer illusion of safety when in fact those customers are being put at greater risk.

*There is actually no convincing data to support the idea that organic is more nutritious.  There is also no reason for modern consumers to be afraid of pesticide residues on conventional food.  Some of the most environmentally beneficial farming options are not allowed or are impractical under the organic rules.  Consumer beliefs are also influenced by certain organic food marketers who actively misrepresent conventional farming as a way to enhance their own fear-based sales.